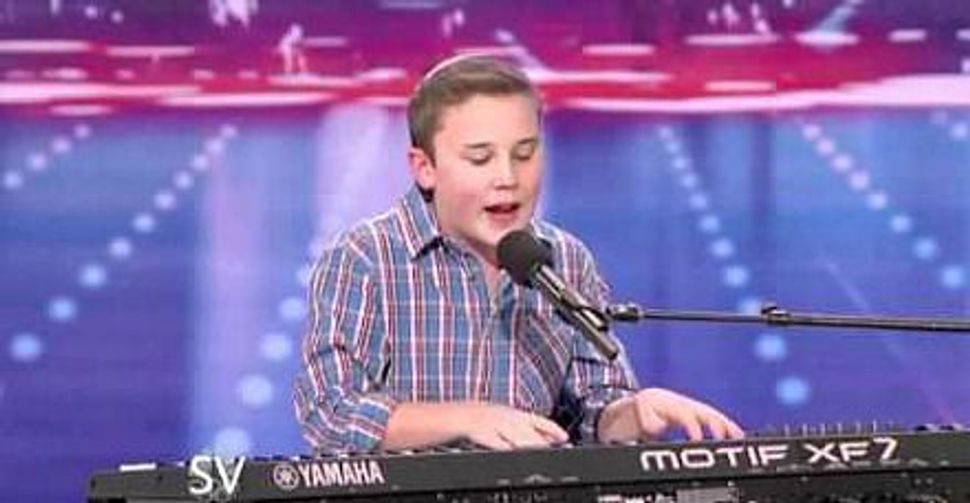 Edon Pinchot, a kipah-wearing Jewish day school student singer and pianist, was eliminated in the semi-finals of “America’s Got Talent.”

Three of the 12 acts that performed in the first set of semifinalists were sent through to the finals during the show broadcast on Wednesday.

Edon had won cheers from the live audience and accolades from the judges following his performance on Tuesday’s broadcast.

Edon, 14, of Skokie, Ill., performed One Direction’s “What Makes You Beautiful” on the popular NBC reality show and received a standing ovation from the live audience. Judge Howie Mandel told Edon that he is “the best singer of the competition.”

The teen was among 12 acts performing live Tuesday night. Other semifinalists included singers, a dancer, a dog ventriloquist, an acrobat, a mind reader and a comedian.

The second set of 12 semifinalists will perform Sept. 4, vying for a chance to take home the $1 million prize.

Edon had performed an audition, in the Vegas round and in the quarterfinals to reach the semis. His kipah has made him a focal point for viewers.

Edon, who is Sabbath observant and keeps kosher, is the fourth of five children and has been playing piano since he was 9. His grandmother, Ginger Pinchot of Silver Spring, Md., says Edon is “very athletic. He’s one of the stars of his soccer team, and he’s also a straight-A student. He’s just kind of an all-around guy.”

Edon is a student at the Ida Crown Jewish Academy in Chicago.