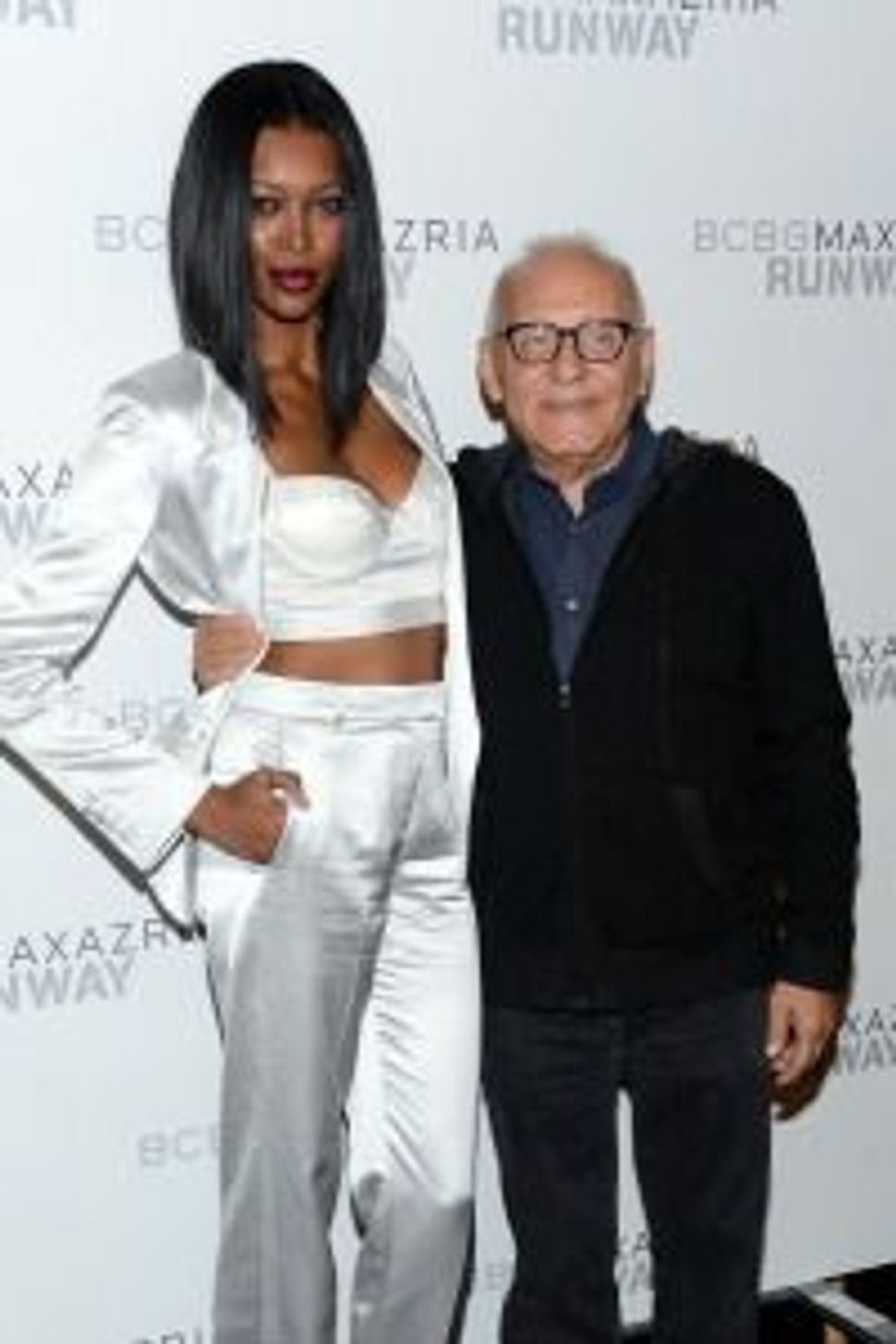 Max Azria with a model at his Thursday Fashion Week show. Image by Getty Images

Max Azria’s wife Lubov Azria, who helps him design both the BCBGMAXAZRIA and the Hervé Léger lines, explained prior to the show that the graphic black-and-white contrast in the Newton photos would be evident in their new collection. She also predicted that dresses would be the highlight of the show, and of all of Fashion Week. “The dresses are a must-have,” said Lubov, BCBG’s chief creative officer, adding that the dresses play off of masculinity and femininity, with the juxtaposition of leather and lace.

Max Azria calls his new collection “fearless,” and in many ways this has as much — if not more — to do with business than with art. In explaining how the economy has impacted his work, he said, “Today we have to be totally crazy and make stuff that stands out. It takes so much more to get a consumer’s attention because they’re more careful about how they spend their money. We also try and make things very precise, bold and basic so that a woman can wear one item for a lot of different occasions. The color black rules everything.

The 63-year-old Azria, born in Tunisia, began in his career in France, where he was raised. In 1981, he arrived in Los Angeles, where he opened several women’s apparel retail boutiques. He launched BCBGMAXAZRIA in 1989, naming his company for the French slang phrase “bon chic, bon genre” (good style, good attitude). His first runway collection was shown at New York Fashion Week in 1996. Today, BCBGMAXAZRIA and Hervé Léger (Azria acquired the French couturier in 1998) are two of several labels under the Azria umbrella.

Azria has a strong following among celebrities. Among those who have been spotted on the red carpet and elsewhere in his designs are Sharon Stone, Fergie, January Jones, Kristen Bell, Dakota Fanning, Miley Cyrus, Vanessa Hudgens, Halle Berry, Alicia Keyes and Angelina Jolie.

The Azrias live in a 60-room mansion in the exclusive Holmby Hills section of Los Angeles, where they have plenty of room to host weekly Shabbat meals for their large family and many friends. “Sometimes there’s only five people, sometimes a hundred,” the 44-year-old, Ukraine-born Lubov told Harper’s Bazaar in 2009. “Over the years, Shabbat became bigger and bigger,” her husband explained. “It’s not an Orthodox Shabbat, it’s much more modern.” Among the regular Shabbat crowd are Max’s three adult children from his first marriage and his and Lubov’s three teenage daughters.