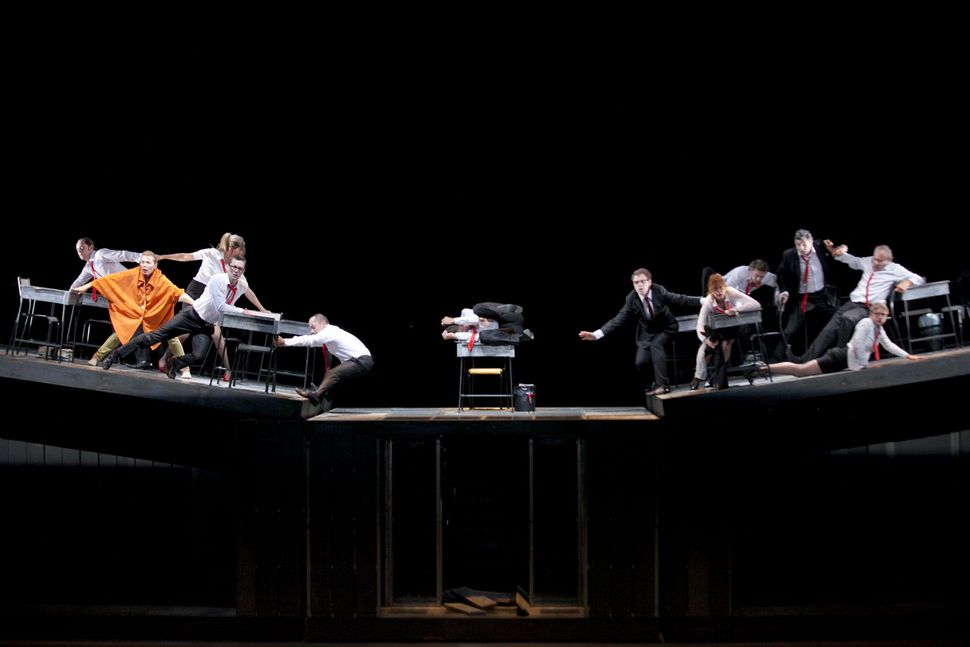 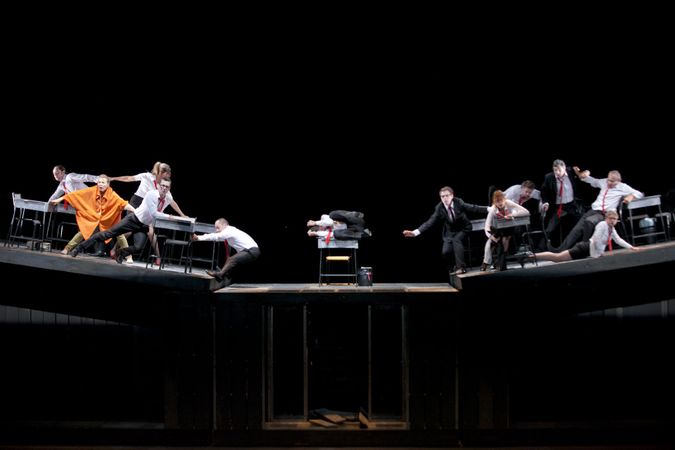 The sleek new production of “Rhinoceros,” by Eugene Ionesco (who may or may not have been partially Jewish), currently running at the Brooklyn Academy of Music, is, well, very French.

It comes via the Theatre de la Villa, Paris’s contribution to what I’d like to call the aesthetic of global hip.

The stylized gestures of the actors are drenched in Jacques Le Coq style clowning. The empty box of the stage—sets that for all their trap doors and scrims and signify toward rather than creating a literal world for the actors to live in—that would bring an “ah, oui,” to Peter Brooks’ lips. The costuming—the matching grey suits and ruby red skinny ties on the men, the fitted skirts and blouses open to the third button on the arch buxom women—conveys a cool snatched from Godard films and Robert Palmer videos.

The effect of all this is to keep you in your head, far away from your heart. But in this case, that’s just where you should be. “Rhinoceros” is, in part, a play about thinking, and what can happen when the thinking stops.

The story is simple: On an otherwise average day, in an otherwise average town, a massive rhinoceros runs wild through the streets destroying property and wounding people and animals. Then it happens again. And again. And again. People have no idea where this rhino came from or even if it’s just one, or many of them. As the rhino sightings become epidemic, it becomes clear that there are many of them. They’re beautiful creatures, actually, muscular and powerful, noble. Their brute force is seductive. And when the residents of the town recognize the rhino’s seductive power, they themselves turn into Rhinoceri. Eventually, everyone succumbs. The only human being left is a drunk and a shlump, a guy who’s too lost and confused to see what’s good for him.

A single metaphor drawn out through an extended story. An allegory. The beauty of a virile metaphor embedded in an allegorical world is that it’s both specific and abstract enough to be applied to almost anything. Metaphorical allegories are high-end aphorisms, anti-platitudinous platitudes.

Here’s what I took away from it:

The powerful find their ways to tyrannize us. It can happen at any time, anywhere. At first, we’re lost in the seemingly inscrutable experience of being so weak in the presence of such a violent intrusion into our lives, so savage, so malevolent, so blind to our needs. We search for meaning. We struggle to understand. We argue with each other. The semantic, pedantic, logical, illogical, syllogical, and tautological rabbit holes of debate can distract, abstract, attenuate and obfuscate the bare, simple fact of what’s happening. And eventually we reach an interpretation, a story that may or may not be the correct, the true story, but most definitely has the power to lull us into thinking we understand and are control of our circumstances. Thus society complacently wends its way through time. Having figured things out, we allow ourselves to stop thinking. We allow ourselves to be seduced by the very thing that’s tyrannizing us. Power, after all, can afford to be pretty. It’s toned and graceful and it only destroys those who oppose it. Our brains might still tell us that something essential to who we are will be lost if we align ourselves with this power, but resistance is exhausting and wouldn’t it be easier to turn off our minds, to stop asking why and what does it all mean and just lose ourselves in herd?

Ionesco called this fascism. I call it corporatism (vis, the shiny new Barclay’s Stadium, just up the street from BAM). Either way, the smelly, the ugly, the gimpy, the drunk, the mentally imbalanced and physically deformed, the person who thinks, and the person who is human, has no place in this new world order.

Or, as Ionesco says, “I think they’re worshiping nothingness, and that too is just a word.” And also, “Think and you’ll exist.”

Joshua Furst’s most recent novel is “The Sabotage Café”