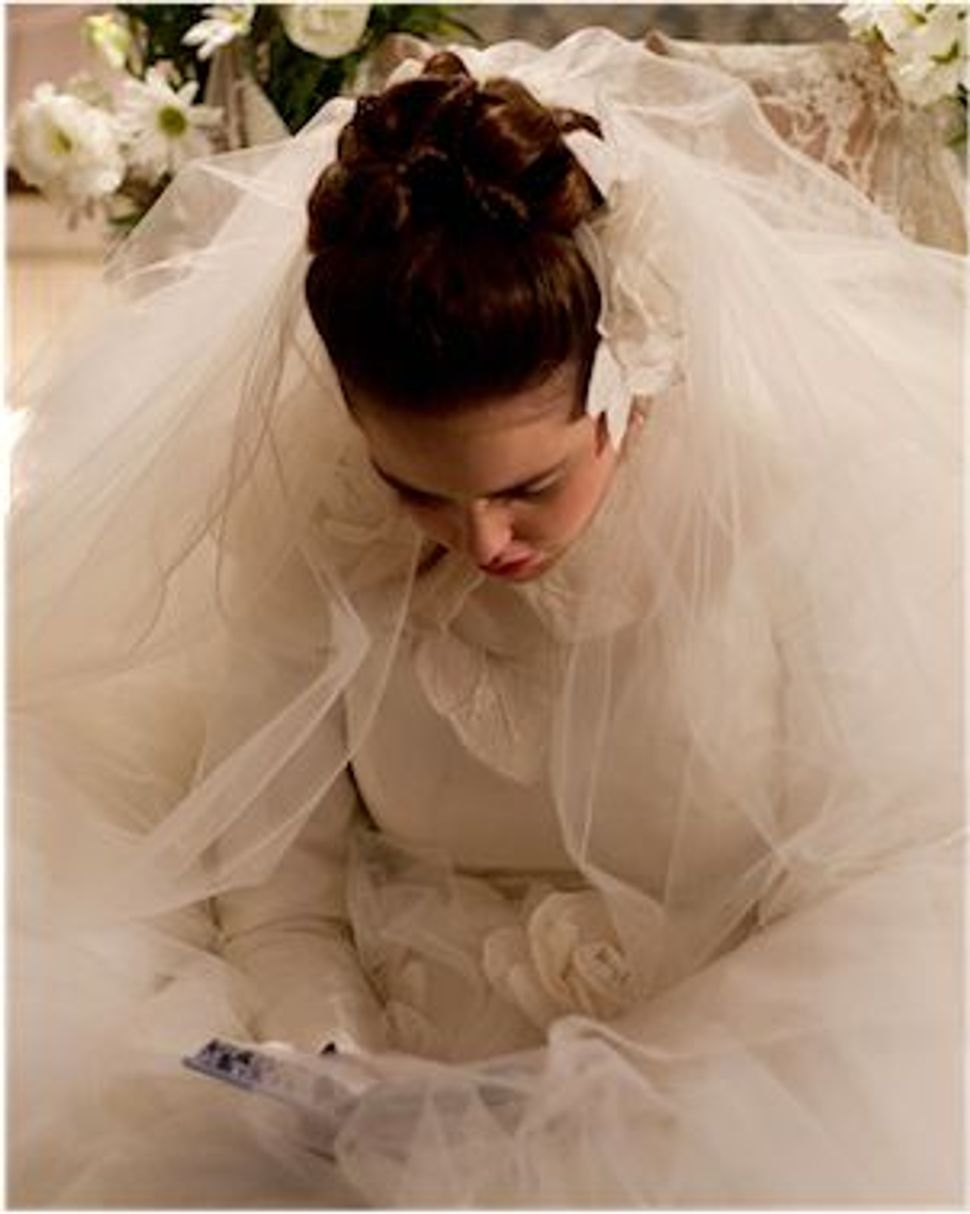 The Israeli movie, which recently scooped up seven Ophir Awards, including best film and best director, and made its U.S. debut at the New York Film Festival this week, dissects in microscopic detail the emotional unraveling of a Haredi family grieving the loss of an adult daughter, who died in childbirth. The desperate matriarch (Irit Sheleg), faced with the possibility her widowed son-in-law Yochai (Yiftach Klein) will whisk her new grandchild off to Belgium in pursuit of an arranged marriage, pushes him to marry her youngest daughter, 18-year-old Shira.

With this ostensibly strange and unlikely suggestion, Burshtein does not send Shira — played by Hadas Yaron in a performance that won her best actress at the 69th Venice International Film Festival last month — off on a quixotic quest for love or to dig deep into the confusing morality of marrying one’s brother-in-law.

Instead, what unfolds is a tenderly restrained story of two people falling for each other. Bound by family duty and her own desire for a husband, Shira agrees to her mother’s proposal. In the context of this tight-knit, sheltered world of Tel Aviv Haredim, the film’s only setting, the idea of marrying a sister’s widow becomes perfectly reasonable.

Through a series of dates at Shira’s family home, the pair questions the mysteriousness and implausibility of their feelings, they poke and prod each other on basic questions rarely discussed in flowering secular relationships. What are these feelings? Is the love pure? They consult a rabbi, doing so while abiding by the hands-off strictures of religious courtship. A gut-wrenchingly uncomfortable scene set on a dark terrace, in which a fraught Yochai stands mere inches from Shira, nearly touching her, is the close exception. While outsiders may see the Haredi world as one of distinct and enforced separation — and Burshtein handily uses physical barriers between men and women to reveal details of ultra-Orthodox life — she also instructs us that the inside lines are not so clearly drawn.

At times, the relationship between Shira and Yochai seems unknowable, even foreign. But rather than confuse, the effect adds a fairy-tale quality to Shira’s coming-of-age romance. Burshtein, a graduate of Jerusalem’s Sam Spiegel Film and Television School who transitioned to Hasidic life in her mid-20s, deftly uses long, softly lit close-ups, allowing us to read her characters’ faces for emotion. Klein’s round brown eyes bore out from his bearded face, constantly exuding confidence, and Yaron’s brow, delicately furrowed in many of Shira’s conversations with Yochai, expresses her uncertainty and confusion.

“Fill the Void,” Israel’s official submission to the 2012 Oscars’ foreign language category, should be considered a counterpoint to depictions of ultra-Orthodox life that commonly appear on North American screens. The prevailing narrative has, almost unequivocally, been one of confrontation with the secular world as fictional Haredim dip their toes into the American cultural mainstream, in the process questioning their insular micro-culture, struggling with their faith, even renouncing their religious traditions.

In recent years, we’ve seen a teenage Brooklyn Hasid played by Jesse Eisenberg shed the moral strictures of religious life by turning to a heathenish life of international drug trafficking in “Holy Rollers” (2010) and, more benignly, an enterprising Haredi woman, played by Natalie Portman, haggle prices in Manhattan’s diamond district with an Indian shopkeeper in “New York, I Love You” (2009). Those films, and others, are defined by the interplay of religious and secular.

In “Fill the Void,” Burshtein’s Haredi world is the only world. The struggles her characters face are not informed or determined by secular life or temptations. Romantic confusion, familial pressure and blossoming love — all are explored in an explicitly Haredi context. Burshtein forces us to accept that the characters will only find enlightenment and understanding within the confines of the lifestyle and ideologies they already know.