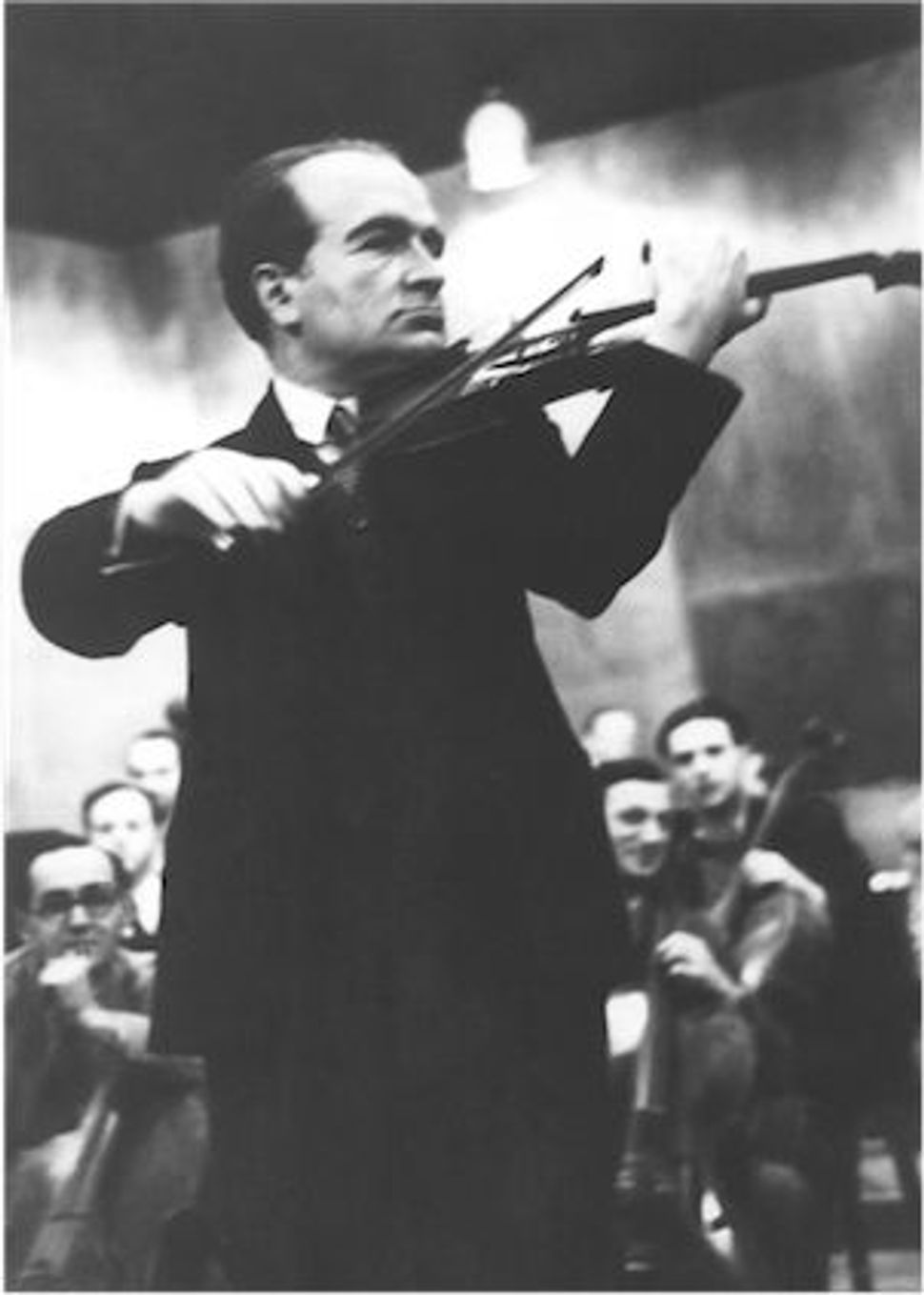 The Nazi era and the Holocaust are such monumental subjects that any documentary filmmaker dealing with them is bound to feel daunted by the challenge. At the same time, we would be foolish to think that even the most serious moviegoer is breathlessly waiting for the next cinematic inquiry into Hitler’s perverse universe. 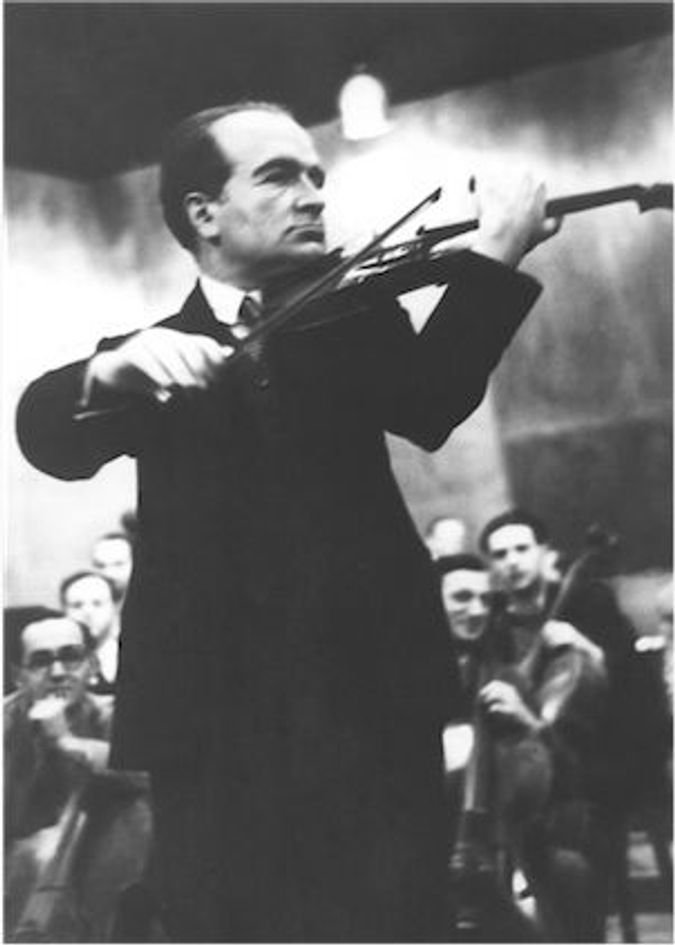 All the more reason to pay attention to a film which finds its way into this period through the experience of a single person — in this case, an extraordinary musician. The documentary “Orchestra of Exiles” implicitly proposes that through the drama of one life the larger moral landscape can be illuminated. Yet if Branislaw Huberman had only been one of the 20th century’s great violinists, I’m not at all sure Josh Aaronson would have made a film as humane and inspiring as this one.

Here is the story of a child prodigy from Poland, born in 1882, prodded by an ambitious father to assure the family’s fortunes, and who became a savior and visionary in the service of his Jewish brethren. That Huberman may well have been a more flawed human being than the film has time to capture hardly diminishes Aaronson’s accomplishment as screenwriter and director.

Aaronson has done something difficult in his documentary, integrating dramatic sequences from Huberman’s life into archival newsreel footage, historical photographs and talking head interviews. These scenes are played by actors who appear as characters in the violinist’s life. Several actors, including two children, play Huberman at different stages, while others embody historical figures well known to us. These sequences are impressed with period detail, humanize the main characters, and are never played for histrionics.

What gives the film narrative shape is Aaronson’s decision to use the premiere concert of the Palestine Symphony Orchestra (PSO) in 1936 as the starting point for a biographical “flashback” and then, finally, as Huberman’s personal and professional triumph and the film’s denouement. Bookended in this way, Huberman’s life unfurls as a classic tale of the Jewish violin prodigy encouraged to early excellence by a devoted teacher and pushed into the commercial spotlight by a demanding father. At a farewell appearance for the fading diva Adelina Patti, the boy’s performance eclipses hers. By age 12, Huberman is playing Brahms in concert before the skeptical composer, and gains a convert. Young Huberman proceeds to take European capitals by storm, yet the child is emotionally and intellectually sheltered.

Only after his father’s death, as a witness to the continental scourge that was the Great War, does the now mature prodigy begin to question his place in the world. He cancels his concerts and spends two years studying at the Sorbonne, returning to the concert stage as a more developed human being — his ethics and political sense more keenly attuned to a world in social and political flux.

The ascent of Hitler in Germany, followed by the banishment of Jewish musicians from all the Reich’s orchestras, hastens Huberman’s activism. Having already traveled to Palestine, Huberman foresees and seizes an opportunity. He determines to assemble the best Jewish musicians, now scrounging for work, and to create a permanent orchestra to settle in the Promised Land. He enlists Arturo Toscanini, doubtless the most famous conductor of the era, to lead the first concert of the Palestine Symphony Orchestra.

In order to secure funds, Huberman performs a grueling series of fundraising concerts in the United States. But securing exit visas and permanent entry into Palestine for musicians creates nearly insurmountable administrative obstacles. Arab protests against increasing Jewish immigration to Palestine further postpone Huberman’s plans, while personally auditioning a broad cross-section of Jewish orchestra musicians desperate to find a way out of Germany leaves him in the uncomfortable position of playing God. Already by 1935 Huberman understands that the fate of those he does not invite into the orchestra can only be a dark one. Meanwhile, Huberman is uncompromising in his opposition to Nazi “spin”; he refuses Wilhelm Furtwangler’s invitation to perform at the Berlin Olympics opening concert and deplores the creation of separate Jewish orchestras for Jewish-only audiences as a collaborationist sop to Nazi anti-Semitism.

Aaronson intersperses voice-over narration and period newsreel footage and photography with a sometimes delightful, always thoughtful, occasionally humorous series of talking heads consisting of the cream of the concert world. We are in the privileged company of Itzhak Perlman and Pinchas Zukerman, Zubin Mehta and Leon Botstein, several highly articulate children of PSO musicians, and even a couple of original musicians themselves, who justly feel they owe their lives to Huberman. The commentary provided by these witnesses amplifies our sense of Huberman’s place in the classical firmament while also placing his work of cultural rescue in its moral and political dimension. In all, he certainly saved hundreds of lives. All this, and a rich array of great music deployed as soundtrack, including excerpts from a number of Violin Concerti originally recorded by Huberman.

In the end, the PSO manages a glamorous evening debut in late 1936 with the demanding Toscanini at the podium. Huberman himself does not perform, insisting that the spotlight remain on the orchestra. In a brief epilogue, we learn that Huberman died in 1947, having created the orchestra that would become, at the birth of the State of Israel, the brilliant Israel Philharmonic Orchestra. A nearly forgotten figure has been resurrected, his humanitarian and professional achievements given proper due. I defy you to leave with a dry eye.

’Orchestra of Exiles’ opens at the Quad Cinema in New York on October 26. Check here for more upcoming screenings.

Watch the trailer for ‘Orchestra of Exiles’: