Eli Roth on ‘The Man With the Iron Fists’ 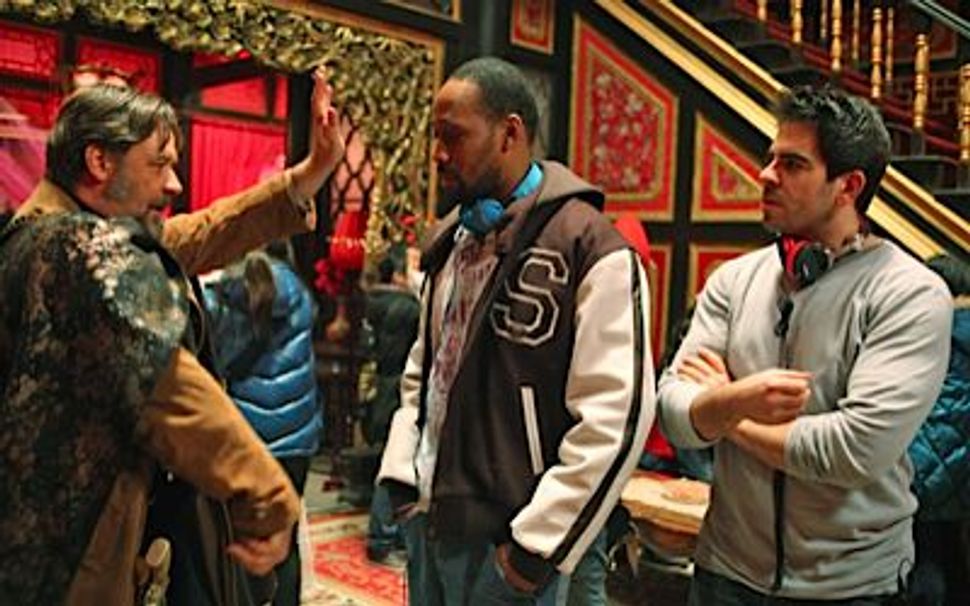 Russell Crowe, RZA and Eli Roth on the set of ?The Man With the Iron Fists.? Image by Chan Kam Chuen

Eli Roth, 40, is a Hollywood multi-hyphenate. He’s part of a group of filmmakers known as the “Splat Pack” because of the violent and bloody nature of their movies. He’s an actor, most notably playing Donny “the bear Jew” Donowitz in Quentin Tarantino’s “Inglorious Basterds.” He’s also a screenwriter and director of “Cabin Fever” and the two “Hostel” movies. 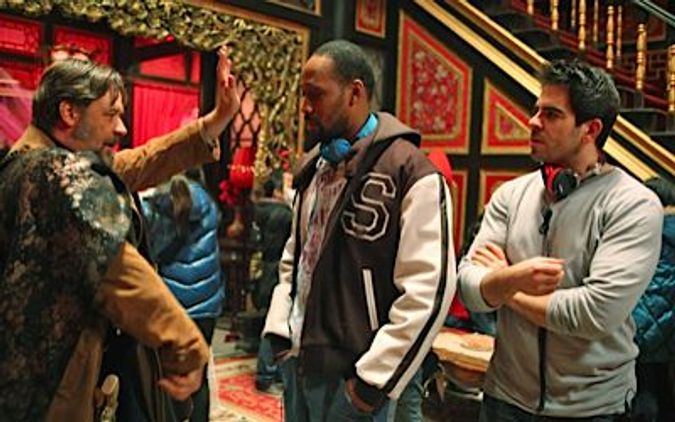 Russell Crowe, RZA and Eli Roth on the set of ?The Man With the Iron Fists.? Image by Chan Kam Chuen

Roth’s latest is “The Man With the Iron Fists,” a kung-fu action adventure that stars Russell Crowe and hip-hop artist RZA, with whom Roth wrote the screenplay. Roth spoke to The Arty Semite about his horror-themed bar mitzvah, how his first big break came from a Seder and being Tarantino’s “Jewish fact checker.”

Curt Schleier: Can you tell us a little about your life growing up?

Eli Roth: I grew up in Newton, Mass., which was one of the bar mitzvah hubs of the East Coast. In the seventh grade, it was non-stop bar mitzvahs and double bar mitzvahs. I remember [preparing for mine] my rabbi asked me what I wanted to do when I grow up. I told him I wanted to be a motion picture producer or a director. He said you need to do one or the other. Why do you want to do both? I looked at the rabbi and said it’s the only way to retain control of your cut.

And the rabbi mentioned that at your bar mitzvah?

Yes, he said about the boy I was sharing the bar mitzvah with, he wants to be a writer and congratulations and wishes for a successful career for him. Eli wants to be a motion picture producer and director, and the whole congregation burst out laughing. I said to myself, go ahead and laugh. We’ll see who laughs last.

You insisted on a horror bar mitzvah.

My cake was a director’s slate splattered with blood. I told my parents I’d only have a reception if they would get a magician to saw me in half with a chain saw. They found a guy who said he would do it, but it turned out he learned it for my bar mitzvah. I was the first person he ever tried it on.

But by then you were already making movies.

I did a lot of splatter movies, mostly animation. My mother paid an artist to teach animation to me and a friend who had a Super 8 camera. All I wanted to do all day was draw hundreds of pictures and then I started to put them together for films. I knew [Steven] Spielberg was making movies as a kid. [Sam] Raimi] made his first [theatrically released] film at 21. I wanted to do that. I made movies continually, and by the time I got into film school I’d done 100 films. They were obviously amateur films, but a lot of the kids in my class had never picked up a camera before.

Your first big break came at a Seder. How did that happen?

I knew Camryn Manheim in New York and when I moved out to Los Angeles I called her. The first thing she did was ask me if I had a Seder to go to, and when I said no, she said you’re coming to mine. I sat next to her cousin, Howie Nuchow, [then executive vice president] of Mandalay Sprots Entertainment. I told him about an animation idea I had and he pitched it to his boss, Peter Guber. It’s one of the things I like about L.A. A lot of times projects come together at a party or dinner or finding someone you connect with in a relaxed environment. When Camryn invited me, she told me her Seder was relaxed. That’s the way it was for me at home, too. Our Seders always turned into Friar’s roasts. I brought Marilyn Manson to my family Seder, Quentin Tarantino. I was his Jewish fact checker [on Inglorious Basterds], helped him understand Jewish psychology.

What do you say to people who complain about the violence in your films?

The violence in horror movies is a joke compared to the stories of the Holocaust I heard when I was growing up. I had friends whose parents were camp survivors. I grew up in a world where I heard stories about what really happened. I read [Elie Wiesel’s] “Night” when I was 10 years old, and to compare anything in a movie to that seems absurd nonsense.

Do you have any desire to film, say, a romantic comedy?

I’ve been doing this for years and have no desire to move away from it. But one of the things I learned is to stop making plans and just go with my guts. I had this opportunity to collaborate with RZA and am really proud of it.

Watch the trailer for ‘The Man With the Iron Fists’:

Eli Roth on ‘The Man With the Iron Fists’