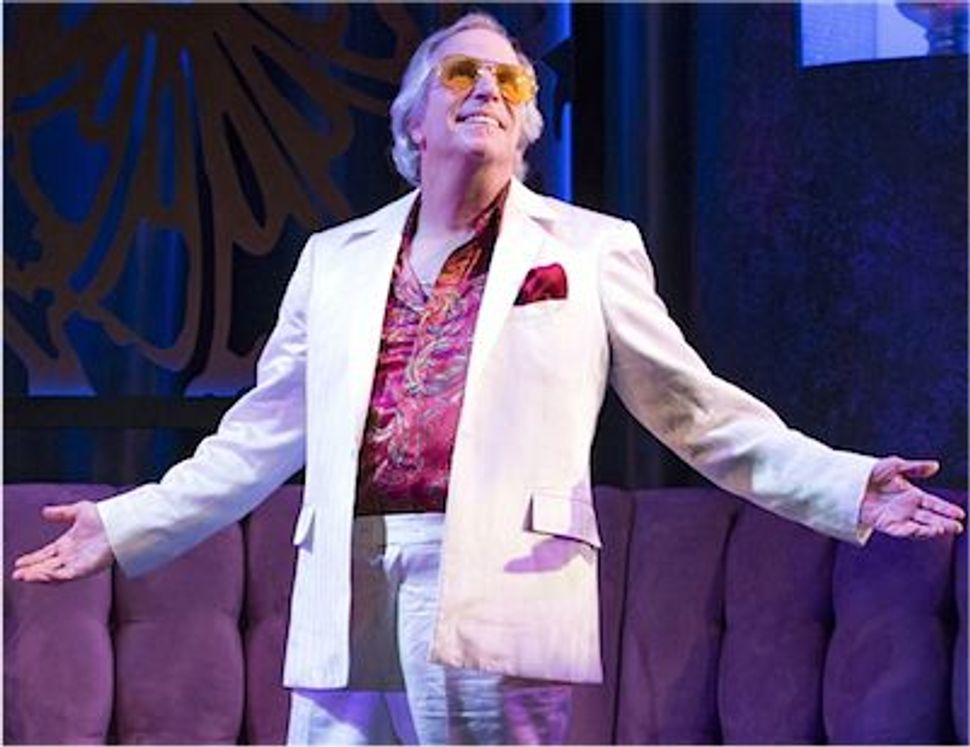 Henry Winkler is on the phone. Finally. We missed our connection a couple of days earlier and by missed connection I mean he forgot to call. He had two performances of his new Broadway play, “The Performers,” that day — as though that should take priority — and The Forward got lost in the shuffle. Go figure. 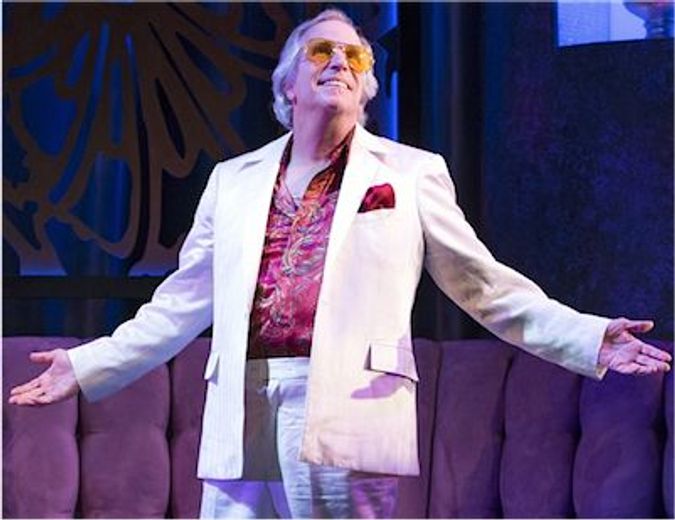 When next I heard from the Fonz (yeah, right, make believe you don’t know who that is), he left a contrite voicemail message that he was at the zoo with his grandson. But finally, from a cab on a way to a restaurant, there he was.

“The Performers” takes place on the night of the Adult Film Awards — the Oscars of the porn industry — and Winkler plays Chuck Wood, an aging Jewish star with a large schmekel up for an award. It’s a comeback role for Wood, unlike Winkler, who never went away. He’s been omnipresent as a writer, director, producer and of course actor, most famously of late for his recurring role on the hit TV series “Royal Pains.” While riding through midtown, Winkler spoke to The Arty Semite about the play, winning the Order of the British Empire and the synagogue his parents helped found.

Curt Schleier: Was making Chuck Wood Jewish your idea or was that in the original play?

Henry Winkler: It was in the original play.

It’s very funny and different. What was your reaction when you first read it?

I never read it (in the traditional sense). The first time I saw it I read it out loud for (a group of potential) investors. I did it with (current co-stars) Cheyenne Jackson and Ari Graynor and three actors I didn’t know. It was very funny and completely entertaining. This was in New York. I was doing “Royal Pains” and had a day off. It was about a year and a half ago.

On the subject of reading, you suffered from dyslexia. Do you believe that influenced your career?

Absolutely. I’ll tell you why: Because of my sense of learning how to get things done, my tenacity, my sense of gratitude when things actually worked out. All of these things I’m sure propelled me like a rocket. These are the things I say to young actors, to anyone: If you will it, it is no dream, Herzl’s words. Those are the watchwords of my life. They’re not just words, but the way the universe works.

Did dyslexia make you a better parent?

My parents made me a better father. They were strict and not able to hear me when I spoke or see as a human being (because of the dyslexia). My children, I always allow them to say whatever is on their minds. No matter how late I was when I was walking out the door, if they had something to say to me I listened. I think a heard child is a powerful child.

Your dyslexia has provided a second career for you, as an author of children’s books that have sold 4 million copies.

The 23rd is coming out in April, a Ghost Buddy book, (one of two series he authors with Lin Oliver). There are also 17 Hank Zipzer books that are about my life as a dyslexic. The Ghost Buddy books are a newer series about not judging a book by its cover or a human being by what you think they are.

The books and your work with children has earned you a number of awards, including a Chevalier de l’Ordre des Artes et Lettres from France and the Order of the British Empire from England. What was that like?

I got a call that the Queen of England wanted me to accept an award and would I be accepting it. Would I be open to accepting it? Of course.

Can you speak a little about your Jewish background?

I just spent Rosh Hashanah and Yom Kippur at Congregation Habonim on 66th Street right off Broadway. My parents were founding members of that temple. I was a bar mitzvah there and married there.

How has your Jewish background impacted your career?

I love the tenacity of the Jews. For 5,000 years people have tried to destroy us and we are still here making fantastic contributions to the world.

Finally, have you done any interview in the last 40 years where Arthur Fonzarelli hasn’t come up?

What do you think the Fonz is doing now?

Right now he owns a Mister Goodwrench franchise. And I’ll tell you about his exceptional loyalty. He came to the first preview and told me I have a hit on my hands.

Watch behind-the-scenes interviews with cast members of ‘The Performers’: