Grandmother Who Duels With Darth Vader 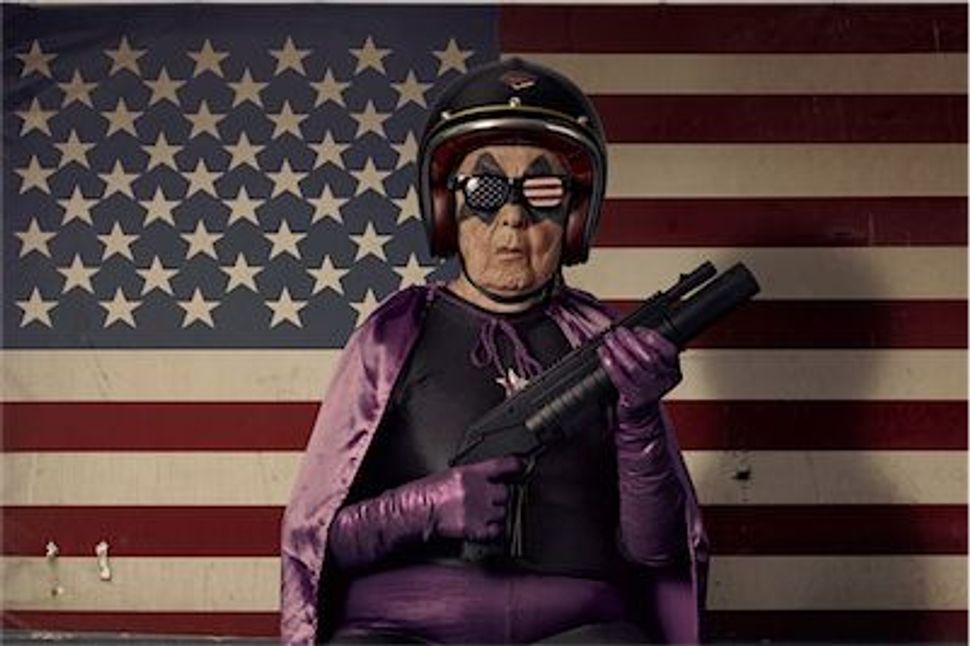 Most grandmothers start to slow down when they hit their golden years, but not Frederika Goldberger. At 93, she’s faster than a speeding bullet, more powerful than a locomotive and able to leap tall buildings in a single bound. Outfitted in her spandex suit, cape, helmet and high-top sneakers, she’s ready for any challenge — not as Frederika, but as Mamika, the geriatric superhero in a series of celebrated photographs by her grandson, French photographer Sacha Goldberger. 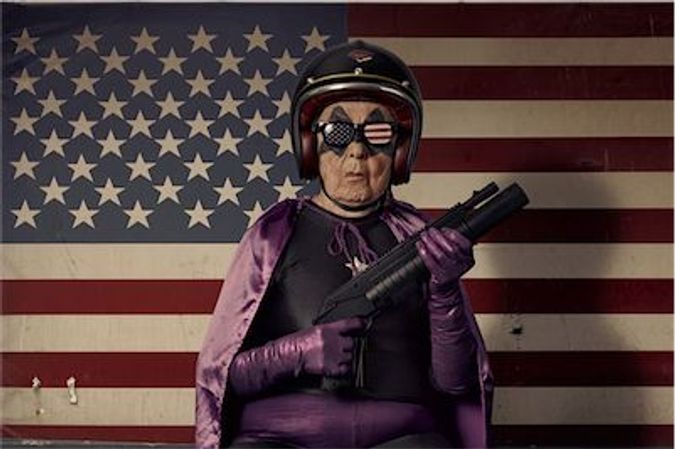 Mamika fans follow her crazy adventures — like dueling with Darth Vader, walking a flying dog, and riding backward atop a vintage black Dodge Coronet — on Sacha’s website, at exhibitions (there is currently one running until January 25 at Act2 Rive Gauche La Galerie d’en Face in Paris) and in two books: “Mamika: My Mighty Little Grandmother,” published in English translation earlier this year; and the new “Mamika & Co” published in France in November.

Sacha, 43, a fashion and advertising photographer, began the Mamika project around seven years ago as a means of helping his grandmother get out of a funk following her retirement at age 80 from a long career as a consultant in the textile industry. Mamika means “little grandmother” in Hungarian, Frederika’s native tongue.

“I’ve always been close to her,” the photographer told the Forward in a phone interview from Paris about his relationship with his grandmother. “She was sad and worried after she stopped working, so I thought about asking her to work with me on a project. I was thinking about maybe a humorous website about French Jewish grandmothers.”

Frederika embraced the opportunity, and from the outset, she became not only her grandson’s muse and model, but also his collaborator. The two met regularly and generated ideas for the whimsically stylized and visually stunning Mamika images. “We played together about ideas, and most of the most eccentric costumes and concepts actually came from her,” the photographer said. “Through these really good ideas, I discovered a side of her I didn’t know. She shows that you can become old, but you can still be very funny.”

Frederika was a baroness, born into a wealthy Hungarian Jewish family. During World War II, she and her husband and two young daughters hid from the Nazis, and also helped save the lives of 11 other people. “The Nazis caught them, but they managed to escape,” Sacha reported. After the war the family remained in Hungary, but when the Communists took over, they fled to Switzerland, leaving their textile factory behind. Frederika continued on to Paris with the girls, while her husband decided to start a new life in London.

“She’s quite a modern lady,” Sacha said of his grandmother, who has been married four times. “And she is very Jewish.” However, because of her war experiences, Frederika wanted her children and grandchildren to hide their Jewish identity. Consequently, her grandson attended a Christian school and was told not to talk about the Holocaust outside of the house. As an adult, he has educated himself about Judaism and has begun to observe Shabbat and holidays and eat kosher.

What started out as simply a way for a grandson to spend more time with his grandmother has turned into a real phenomenon. There are thousands of Mamika photos (merely 500 of them have been published in the books), and there are Mamika fans all over the world.

Frederika has slowed down somewhat, but she is still game. She has been assisting in promoting the new book and continues to generate new Mamika ideas. “My grandmother used to ask me, ‘When are we going to have lunch together?’” Sacha said. “Now, it’s ‘When are we going to make more photos?’”

View a slideshow of images from ‘Mamika’:

Grandmother Who Duels With Darth Vader