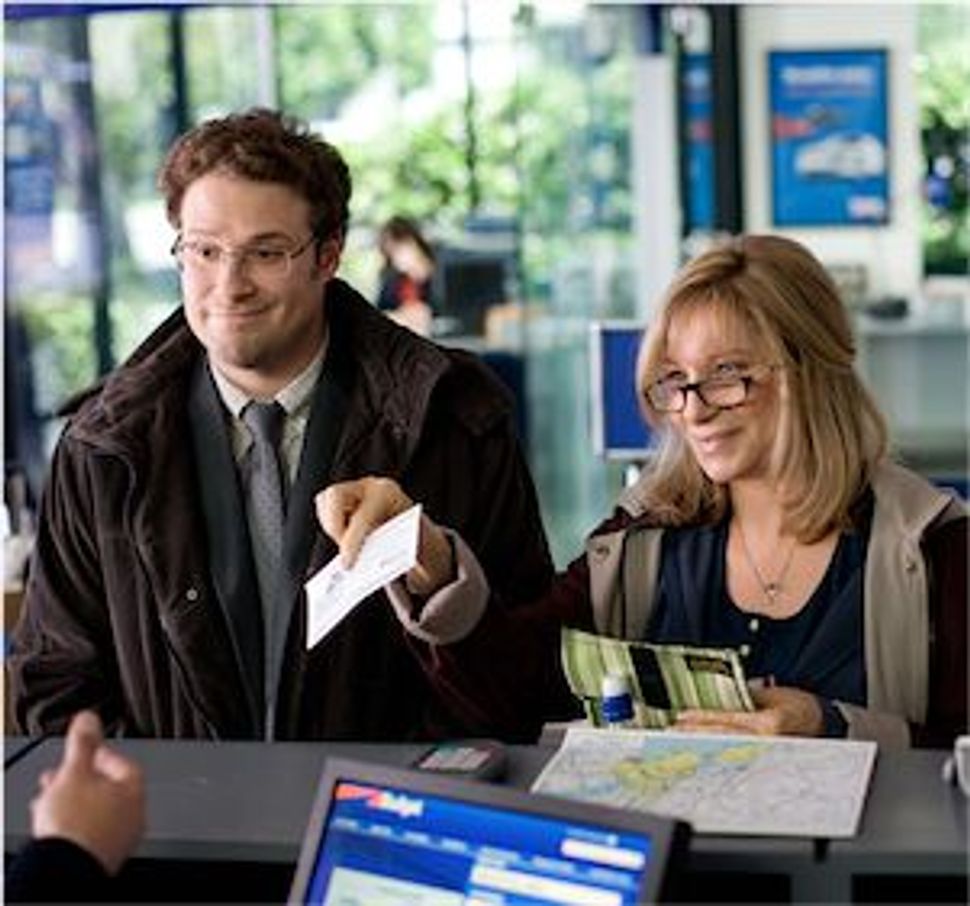 It’s difficult to decide who to hold responsible for the new Barbra Streisand/Seth Rogan film, “The Guilt Trip.” There is plenty of guilt to go around.

Andy Brewster (Rogan) is a chemist who developed a natural cleaning product from renewable resources. He’s sunk his last pennies into the project and has been making the rounds of large retailers hoping to sell it.

He’s about to go on one last cross country sales trip before throwing in the towel. After flying to New Jersey, Andy is staying at his mother’s home and plans to leave from there on the eight-day journey. At the last minute, he invites his widowed mom, Joyce (Streisand), to accompany him.

And there you have the template for what no doubt was intended to be a heart-warming voyage of discovery, where mother and son find common bond and understanding. But “The Guilt Trip” breaks the mold — and not in a good way.

Both Brewsters are caricatures rather than full blown characters. As a result, what the press notes describe as “mashugana situations” are cringe-inducing affairs. What else would you call an early scene where Joyce tells her son that his father was a rebound? Her true love was a man named Andrew Margolis, who wasn’t interested in getting married. So when Andy’s dad proposed, she accepted — and named her only son after her former suitor.

The entire plot revolves around that unlikely revelation. Andy locates the man in California, discovers he’s still single and asks his mom to accompany him, though keeping secret his plan to reunite the pair.

Along the way the two have road trip misadventures — the “mashugana situations” that are presumably intended to be funny. For example, the first night when they check into a motel the desk clerk assumes they are a couple. Streisand looks good for a woman her age —70 — but not that good.

Don’t let the fact that Joyce’s last name is Brewster or that she named her son to honor a living person fool you. She is definitely Jewish. This is, in part, why I so much wanted to like ” The Guilt Trip.” I come from that environment and rarely see it portrayed with the affection and humor hinted at in the trailer.

But Joyce isn’t just a stereotypically annoying, overbearing, suffocating coupon-loving Jewish mom. She’s an annoying, overbearing, suffocating coupon-loving Jewish mom totally oblivious to her actions which defy logic and common sense. Sitting in a business office, not even my mother would spit on her hand and fix a cowlick on my hair. And that’s saying something.

Andy is no better. It’s possible that a person with a masters degree in organic chemistry smart enough to develop an FDA-approved cleaning product is ignorant about marketing. (Does the FDA really approve cleaning products?) It’s possible that he would pay to manufacture 10,000 bottles without a customer in sight, and that he would give the same pitch over and over again, knowing no one laughs at his jokes and that buyers’ eyes glaze over when he begins. But is it really possible that he would give pitch after pitch without once demonstrating how his product cleans?

Very few things these caricatures do are organic to the story, and destroy what little momentum the film has. So who’s to blame?

The most obvious target is screenwriter Dan Fogelman, but that’s a bit too easy. Fogelman based the film on a cross-country trip he took with his own mom, who coincidentally was named Joyce. But I am willing to bet that the screenplay he wrote is not the one that you see on the screen.

He’s too smart. His first screenplay was “Cars,” a great Pixar film where animated autos demonstrated more logic than Streisand/Rogan. Frankly, even Fogelman’s less successful efforts (“Crazy,” “Stupid Love”) tend not to be as crazy or stupid as this one.

According to the press notes, the process of getting Streisand to sign on “evolved slowly over numerous meetings and re-workings of the script.” These kinds of meetings are not unusual, but Streisand has a reputation of being unusually demanding, and I’m certain has to shoulder a share of the responsibility.

Then there is director Anne Fletcher, whose story-telling skills seem wanting. The editing is disjointed and there are scenes in the film that add nothing and seem like filler. Another sign: often a comedy’s best and funniest scenes are in the trailer. Here the funniest scenes from the trailer aren’t in the film.

There is the requisite happy ending. Andy takes mom’s advice and finally makes a sale. Joyce finds closure from Andrew and love in the form of a cowboy who likes the way she eats. Really.

Watch the trailer for ‘The Guilt Trip’: