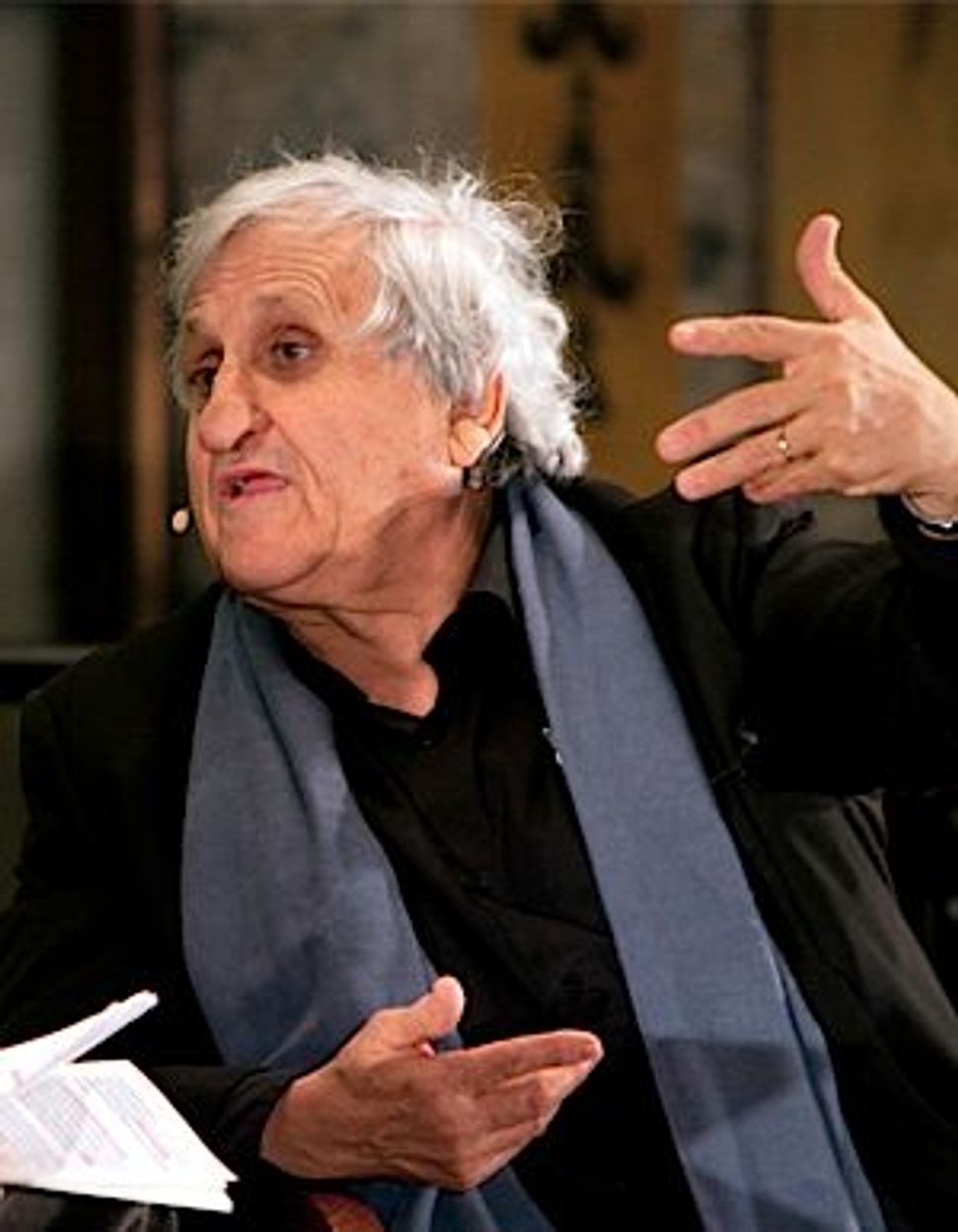 Politics was indeed an inescapable subject at Yehoshua’s talk. The recent election has given Yehoshua cause for optimism, since the chiding of Netanyahu by the franchise helps “stop the glide towards a binational state,” a solution Yehoshua believes to be implausible. Israelis and Palestinians are “two different nations” with separate “religions and history,” he said — they are “connected to different worlds.”

Yehoshua’s bold proclamations came at the conclusion of the packed second day of Jewish Book Week, London’s nine-day literary festival that began February 23, celebrating the best of Jewish literature and ideas. Yehoshua was preceded on Sunday by Laurent Binet, discussing his debut novel “HHhH,” about the assassination of Reinhard Heydrich, and by David Miliband, the former Foreign Secretary, talking about the legacy of the late historian and social democrat, Tony Judt. Later this week Simon Schama, the Chief Rabbi Lord Sacks, Shani Boianjiu, Sayed Kashua, and Deborah Levy will also be in attendance.

Yehoshua’s presence in London was connected to the publication of his most recent work of fiction, “The Retrospective,” due for release in the United States in March. In the novel, elderly film director Yair Moses notices a reproduction of the scene of Roman charity in his hotel room. The sight carries him back to the breakdown of his relationship with his former student, Shaul Trigano, thus setting the tone for a well-crafted and reflective, if somewhat flawed novel on creativity and mortality.

“We are living in an age of creation,” Yehoshua said in his talk, noting that anyone with a laptop or a phone is now a writer, filmmaker or photographer. The purpose of “The Retrospective” is to “enter and analyse” the various forms and processes of creation, he said.

The choice of a filmmaker as a character, rather than a novelist, was a deliberate one. In the first instance, Yehoshua did not believe that the world needs another tale of an aged writer detached from his muse who rediscovers his vim. Picking apart the act and art of filmmaking allowed Yehoshua to explore the dynamics and tensions within the creative process in a way he could not do with novel writing. The problem with the novelist as a character, as Yehoshua put it, is that he is the scriptwriter, the director and the cinematographer all in one — there is, then, only an inner conflict.

In the original Hebrew the novel’s title is “Hesed Sefaradi,” which translates either as “Spanish Charity” or “Compassion.” Sephardic identity is a theme that runs through Yehoshua’s novels, and he continues to see the tension between Ashkenazim and Sephardim as central to life in Israel. The real difference between citizens of Israel is “between those Jews who lived in Christian countries, and those from Arab and Muslim countries,” he argues.

While the use of the term Sephardim in Israel has come to encompass Jews whose origins span from Spain and Morocco through to Iran and Yemen, Yehoshua asserts that the Sephardic identity is essentially a Mediterranean one. In fact, Yehoshua believes that Israel should itself have a Mediterranean outlook. At the moment, Israel is “too much influenced by America,” he said, describing the relationship with the United States as “erotic,” and an obsession. Rather, he sees Israel as being closer to Greece and Turkey, Mediterranean nations that were once the “cradle of civilisation,” and part of the region that gave the world its earliest forms of philosophy, including Judaism and Christianity.

“This is our identity,” Yehoshua said. “We should insist it.”