Abba Kovner on Page and Stage 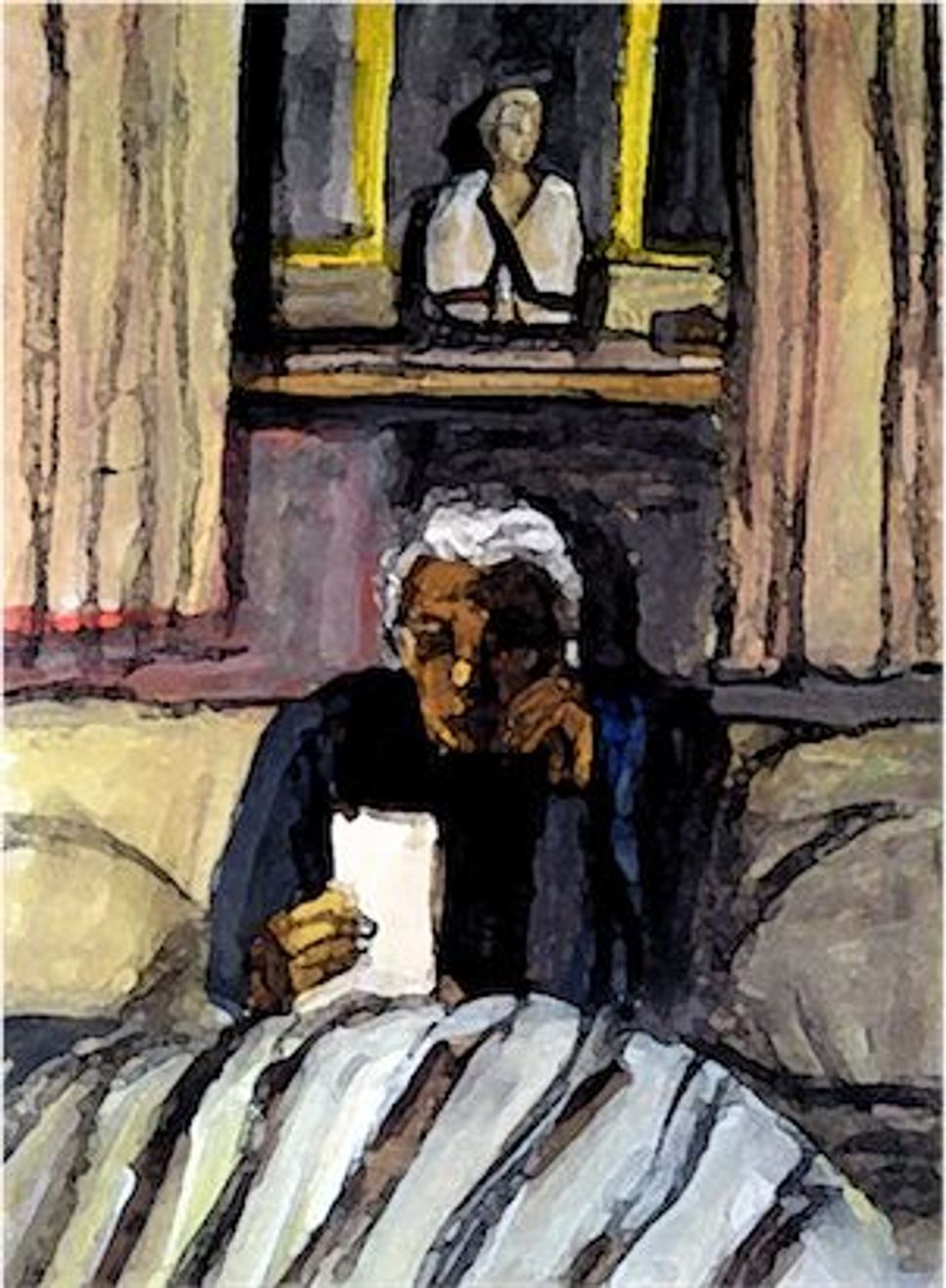 Michael Kovner’s first graphic novel, “Ezekiel’s World,” recently adapted for the stage by playwright Jenny Levison, peers into the uncomfortable world of things left unsaid between father, (Ezekiel) and son, (Amos); husband, (Amos) and wife, (Yvonne); and of history itself.

An Israeli painter who studied in New York with artist Philip Guston in the 1970s, Kovner is also the son of Israeli poet and Vilna Ghetto fighter, Abba Kovner, who died in 1987. Seen in its February premiere at the JCC in Manhattan, directed by Michael Barakiva, “Ezekiel’s World” finds the protagonist, a thinly disguised Abba Kovner, portrayed as a forgotten man – a writer whose poems and ideas, as well as his place in history, are no longer part of contemporary culture.

Downgrading one’s father is tough business, but it’s an excellent way to strip-down a hero’s identity. In the first scene, a physical therapist (Na’ama) visits Ezekiel’s Jerusalem home, giving the poet someone to not only fix him, but to speak to. Set in several cities, including San Francisco, where Ezekiel’s son and family live, as well as in Jerusalem and Vilna, the story moves between the 1991 Gulf War and World War II, and culminates in the pivotal moment of Ezekiel’s life, the Vilna Ghetto uprising. (Abba Kovner and the Partisans escaped through the sewers, but his mother was left behind and died.)

While graphic novels are usually drawn in a highly stylized serial and episodic manner, Michael Kovner anchors his drawings and paintings in a more modernist, painterly approach, incorporating the shorthand of illustration as a way to telegram ideas. Where the novel relies on visual language to propel the story, with occasional captions, the play uses music, sound design and voice as its primary dramatic vehicle. On stage, Michael Kovner’s art appears in the background as a more conventional video projection. This rebalancing alters the weight of information in the play, creating a more linear approach to dialogue.

Though neither bio pic nor documentary, the unique form of Michael Kovner’s graphic novel involved complex choices for stage. As Levison notes: “To be on stage, the work needed to be compressed, with stream-lined storytelling.” Because there are so many nuances and sidebar events in “Ezekiel’s World,” from trips to the beach taken by Na’ama and Yvonne, to military misconduct outside Hebron, Kovner’s ambitious work presents compelling problems to any director or playwright. While family relationships are dodged or thwarted, a central narrative emerges as Ezekiel invites his grandson, Noni, to rebuild the Vilna Ghetto out of legos. As Levison adds: “Noni becomes a vehicle for something that Ezekiel can’t say to his own son.” The lego scene recalls Tom Sachs’ “Prada Death Camp” (1999), where the artist reconstructed Auschwitz out of a Prada hat box, as well as Libera Zbigniew’s “Lego Concentration Camp Set” (1996).

Interestingly, Abba Kovner studied sculpture at the University of Vilna before the War and was a founder of Beit Hatfutsot: The Museum of the Jewish People, which was first conceived as a museum of ideas. This scene points to Abba Kovner as a sculptor and someone with no need for spoken language. This idea is worthy of further development in the play, especially given the fact that not only was Abba Kovner outspoken as a partisan, telling the Jews in Vilna that “Hitler plans to destroy all the Jews of Europe,” but also that at the end of his life he could no longer speak because of throat cancer.

In “Ezekiel’s World,” the protagonist emerges not only as a super-hero with doubts, but also as someone who rescues himself from obsolescence to perhaps rebuild his life. As Michael Kovner states: “Abba Kovner lived with contradictions that had no resolution.” Given the early run for the play, one hopes the project maintains its momentum.

Abba Kovner on Page and Stage