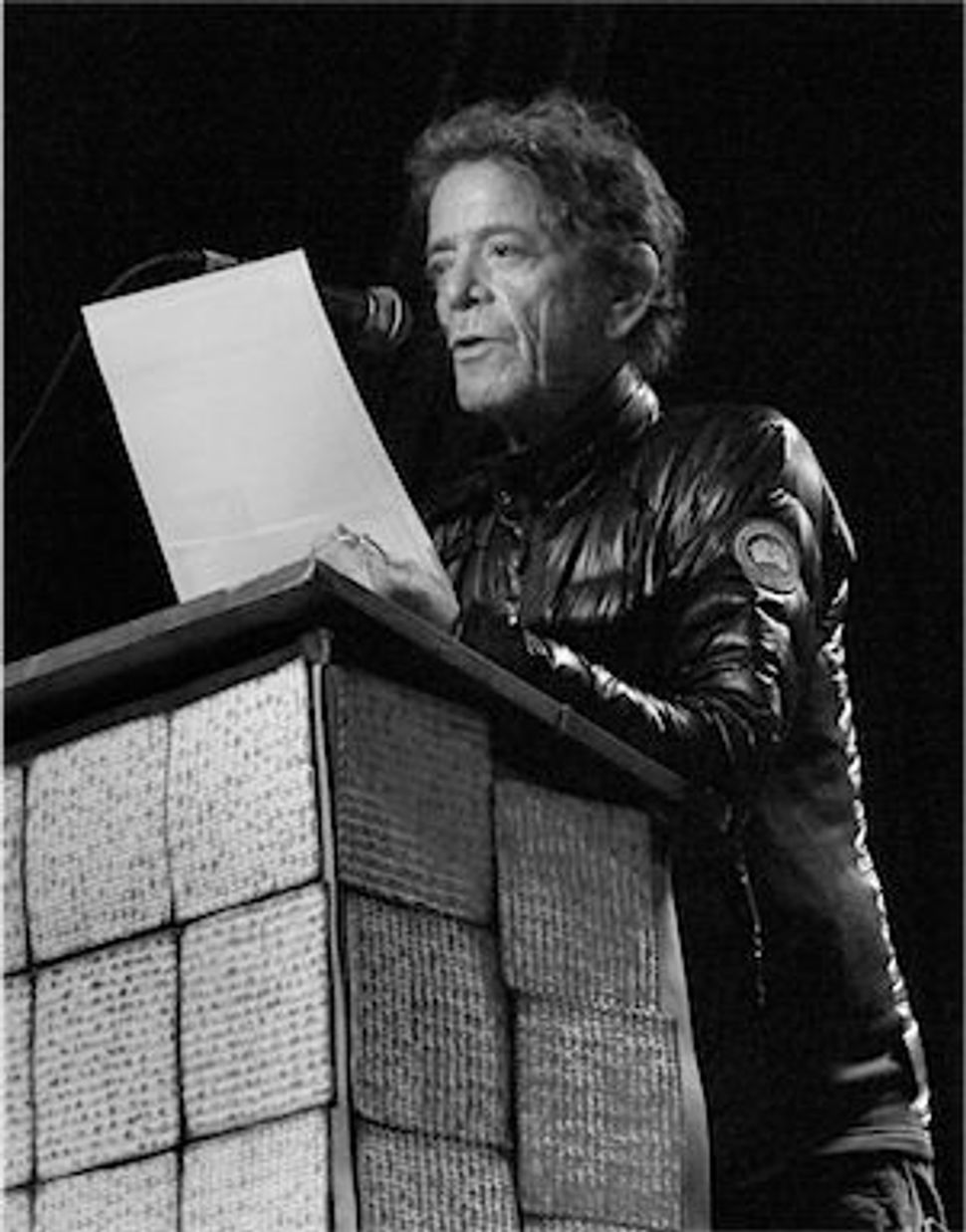 Editor’s note: Lou Reed would have turned 79 on March 2, 2021. In honor of him and the upcoming holiday we have republished this piece, which first appeared in March of 2013, about the singer-songwriter’s historic “Downtown Seder.”

Lou Reed is standing in front of a room full of Jews on Varick Street on a night that is unquestionably different from all other nights. “Exodus, movement of Jah people. Send us another brother Moses from across the Red Sea,” Reed intones with the cryptic, stentorian sermonizing of a downtown, denim-clad rocker-turned-street rabbi. The text, culled from Bob Marley’s “Exodus,” is a politically charged retelling of the biblical tale — Reed’s assigned passage for the star-studded March 19 Downtown Seder at City Winery — and his interpretation is anything but orthodox. “Move, move, move, move, move, move!” he rasps with a risible if unleavened air from the de facto bimah. “Park… or move.” 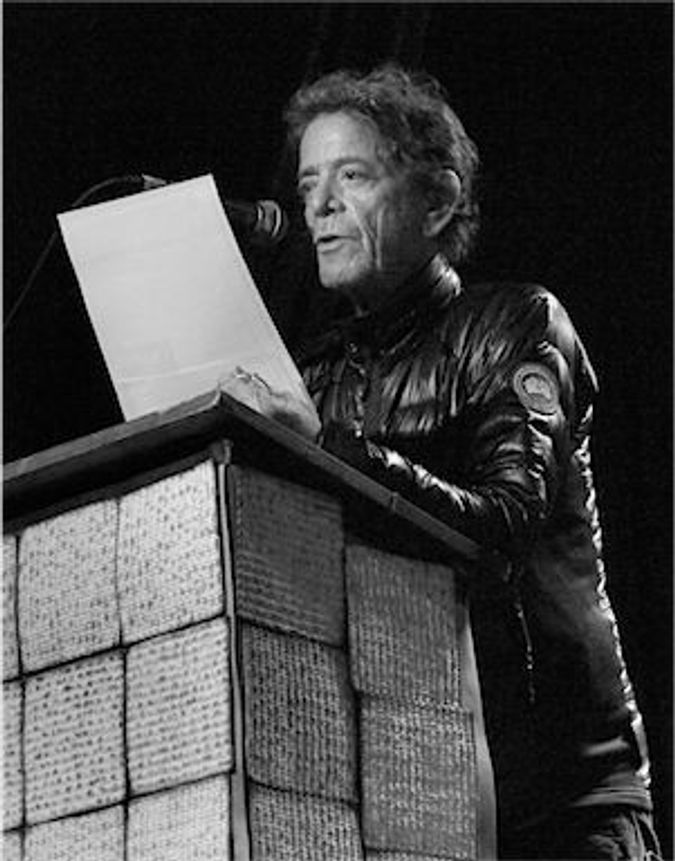 Now 71, the former Velvet Underground frontman and downtown prophet held the bibulous congregation, perhaps slightly hipper than the typical minyan, in rapt if compromised attention to receive the hard-earned wisdom of the “wise child” between their second and third glasses of wine. Or fourth or fifth, but at this Seder, who’s counting?

“Feel free to drink in any order,” City Winery impresario Michael Dorf stipulated before the first glass was tipped. “You are leaning as free men and women, leaning neither to the left nor to the right.”

At a Seder that was more deconstructionist than Reconstructionist, the other three children all betrayed a youthful innocence that mined the Haggadah for its symbolic depth. Performance artist Laurie Anderson, Reed’s wife, as the simple child, recited “The Dream Before,” a contemplation of the meaning of history. Rockapella founder Sean Altman, the rebellious child, performed a whimsically irreverent papal tribute penned by fictional Pope Antisemiticus titled “Blame the Jews,” as well as “My Phantom Foreskin,” a circumcision ballad. Cast against type as child who does not know how to ask, Philip Glass opted out of the interrogative mode in typical Zen fashion by tickling the ivories with his “Etude No. 10.” There are few reasons most Jews would consume the bread of affliction earlier than absolutely necessary; this was one of them.

In lieu of the typical four questions, the Downtown Seder Haggadah expands on socially conscious quandaries that have not yet been answered. Leading figures from the public and non-profit sectors addressed modern plagues — gun violence, the modern slavery of human trafficking, climate change and global poverty — in an attempt to part a deadlier kind of Red Sea. Among them were Julie Menin, a candidate for Manhattan borough president, Maurice Middleberg, executive director of Free the Slaves, and Dan Gross, president of the Brady Center to Prevent Gun Violence.

On the cantorial side, avant-garde trumpeter Frank London growled a New Orleans front-line style “Go Down Moses”; Israeli singer-songwriter David Broza performed “Things Will Be Better,” the first song he ever composed, and a gathering of Shlomo Carlebach acolytes interpreted the catalogue of the “singing rabbi” with Neshama Carlebach, his daughter, Jewish gospel singer Josh Nelson, guitarist Jon Madof, and a representative sampling of other intrepid jazz daveners.

Despite a dearth of hametz, laughs were not in short supply. Comedian Mark Normand held forth on the anxiety of being a gentile performer at a Jewish event; stand-up comic and author Joel Chasnoff extolled the virtues of kosher for Passover candy, the dog-hair-covered afikomen hidden underneath the couch, and life in the Israeli army; comedienne Judy Gold performed a modified “Dayenu,” enumerating Lance Armstrong’s more than sufficient misdeeds.

For humor more conducive to reclining, screenings included Internet video star Michelle Citrin’s ode to the many uses of leftover matzah, a comic trio from the off-Broadway show “Old Jews Telling Jokes” (“A guy hands a piece of matzah to a blind man. The man says, ‘Who wrote this crap?’”), and a reading by essayist and author Rachel Shukert detailing the fictitious tongue-in-cheek tale of the legal defamation battle that created the Hillel sandwich.

The night ended, belt buckles a little tighter from a festive meal of matzo ball soup, eggplant lasagna, and red bliss potatoes, with the obligatory macaroon dessert. Then, as though possessed by the spirit of Elijah himself, liturgical folk singer-songwriter Jeremiah Lockwood sang a fiery rendering of “Eliyahu Hanavi,” leading the crowd back into the urban desert.