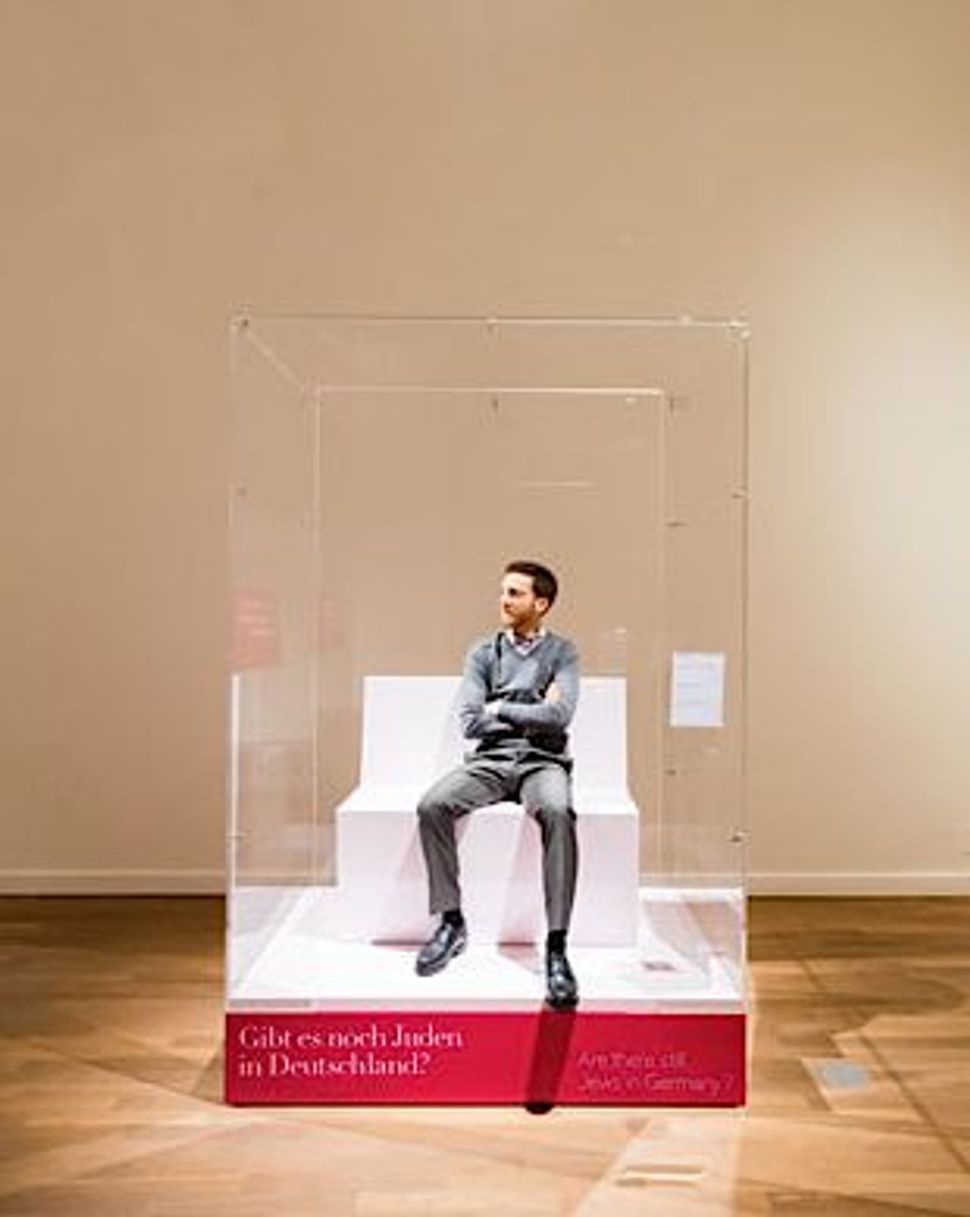 What does it mean to reduce the contemporary Jewish experience to a series of quotes, objects and stereotypes, and to conclude an exhibit by placing a live human in a glass box to answer the questions of museum-goers? On March 22, Jews gathered across the world to observe the start of the Passover holiday, recalling our central narrative of what it means to move from slavery to liberation. On the same day, the Jewish Museum Berlin opened an exhibition promising to “showcase Jews,” hoping to create a space for dialogue. The show, entitled “The Whole Truth…everything you always wanted to know about Jews,” runs through September 1, 2013. The timing of this exhibition takes on a new level of irony ⎯ liberation seems to have taken holiday in Germany!

How is this exhibition at the Jewish Museum Berlin different from all other exhibitions about Jews? Promotion for the exhibit included an illustrated trailer beginning with the moment of conception asking, “What makes someone a Jew?” thus framing the entire exhibition from a biological or racial perspective. A few moments later, a series of changing faces further illuminate the point, asking, “How do you recognize a Jew?” In keeping with centuries of tradition regarding Jewish caricatures, viewers will be astonished to realize the nose is the only thing that does not change with each face and grows larger towards the end of the digital mash-up.

As visitors walk though “The Whole Truth” exhibit, a vote is cast using coins to determine if Jews are “good at business,” “smart,” “good looking” or “animal lovers.” The votes are tallied and displayed at the conclusion of the walkthrough. For the finale, you cannot miss the most controversial inclusion of all — a Jew in a box. Yes, that’s right, an installation in which German Jews sit in a glass box to answer questions posed by curious onlookers.

The museum’s press release explained that the concept of the box was their way of responding to the critique most often levied at them: How can their institution mount artifacts telling the story of German Jewish culture in an authentic way, given the complicated reality of a post-Holocaust Germany? Objects in vitrines and museum labels could, in the museum’s words, “unethically use Jews as ‘exhibition objects’ and subject them to voyeuristic curiosity […] Searching for the ‘whole truth,’ visitors now have the opportunity to confront their confused feelings about Jews.”

Given the problematic history of Germany, one should be extra careful when considering how to be “provocative.” This was a moment for the Jewish Museum Berlin to think outside the box, rather, than placing Jews, literally, on display inside of one. Given Germany’s sordid past with the pseudo-scientific practice of physiognomy and racial profiling, we did not need to be reminded of how Jews have been likened to a circus sideshow.

I have dedicated over 10 years to creating new approaches to Jewish cultural engagement. Currently, I work as the co-director of the Shulamit Gallery, in Los Angeles, which seeks to engage Angelenos through cross-cultural exhibitions and programming focused on the Middle East with a special interest in Israeli, Iranian and Jewish artists. Thus, I want the Jewish Museum Berlin ⎯ as the institution preserving the cultural legacy of Jewish people in Germany ⎯ to get this right! They provide an important perspective reflecting a commitment to remembrance. The building’s architecture and core exhibition produce a strong narrative, translating the complicated themes of destruction and survival. The very creation of a Jewish museum in Germany is meant to highlight the Jewish renewal effort and the continuation of Jewish heritage, after the Shoah, in a powerful way.

Exhibition curator, Miriam Goldmann, has been quoted saying, “We wanted to provoke, […] and some people may find the show outrageous or objectionable. But that’s fine by us.” While Goldmann and others need to be able to respond to trends in popular culture and create opportunities for dialog, they also must do so with sensitivity. Haven’t we been placed under a microscope enough times throughout history? Instead of a box, they could have had Jewish volunteers and non-Jewish German’s talk to each other as equals. If you want the “whole truth,” the only way to get it is when you treat everyone with dignity and respect.