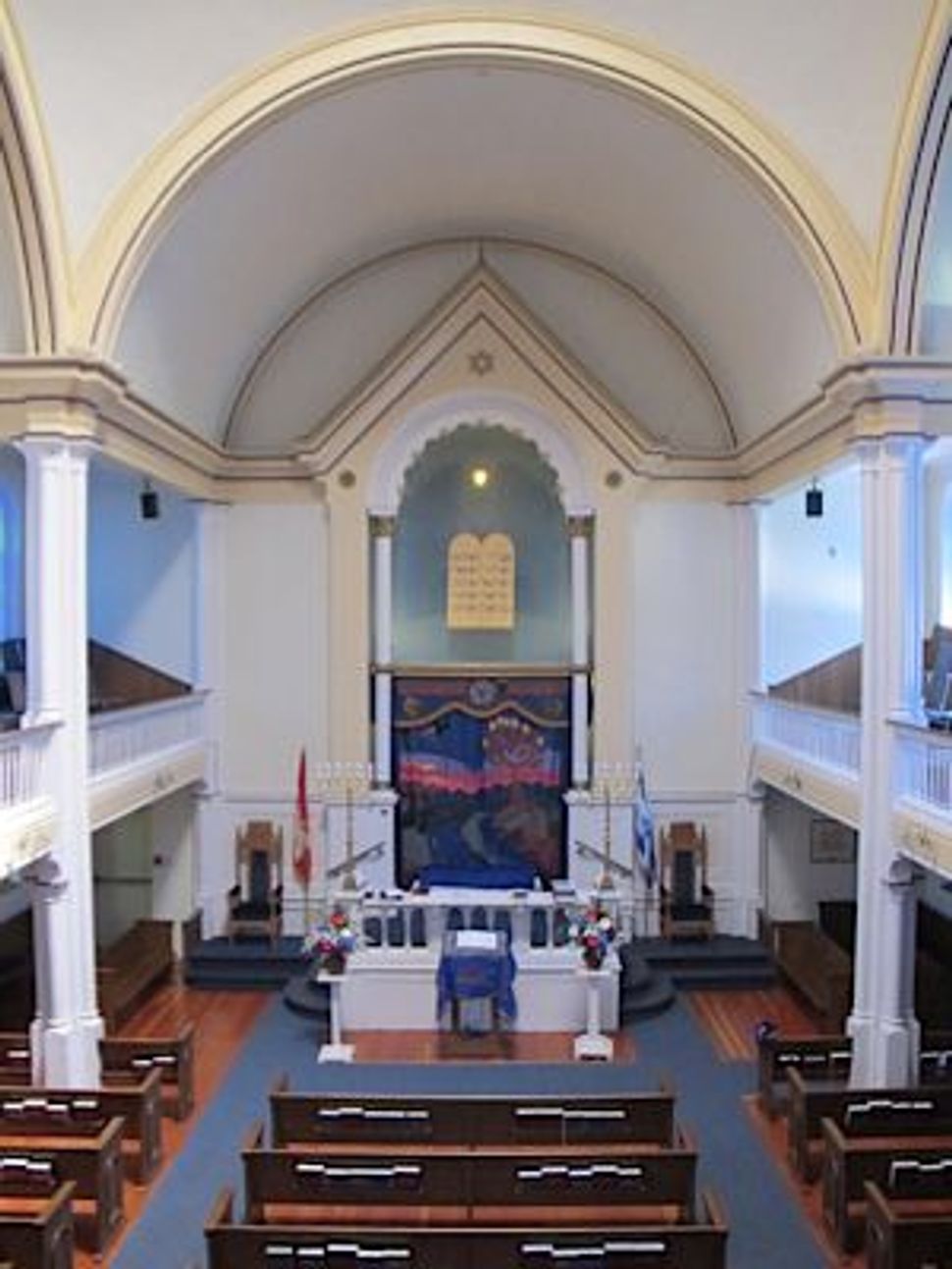 It’s all because he looked up one day during services and noticed a crack in the ceiling of Congregation Emanu-El that Major General (ret.) Ed Fitch, an engineer with the Canadian Forces, ended up spearheading the 150th anniversary celebrations for the Victoria, British Columbia synagogue. Emanu-El is Canada’s oldest synagogue building still standing and still in use as a synagogue, and Fitch intends to ensure that it stands for another century and a half.

“For me, it’s all about the building,” Fitch told The Arty Semite about the rare Romanesque Revival building, considered one of the three most significant buildings in British Columbia. It was designed by Wright & Sanders, architects who went on to build many large and prestigious San Francisco buildings, most of which were destroyed in the city’s 1906 earthquake.

In addition to fundraising for the repairs and restoration required because of the shifting of the building’s roof supports over time, Fitch and other members of Emanu-El have been hard at work preparing for an all-day, high-profile celebration marking the congregation’s sesquicentennial on June 2.

Congregants and other locals will dress up in period costume to parade through town to the synagogue’s location at the corner of Pandora and Blanshard, where there will be a reenactment of the laying of the building’s cornerstone.

While the ceremony will be as true to history as possible, there will be one element that will be different. “Back in 1863, there were no representatives of the First Nations [Native Americans] present,” said Rabbi Harry Brechner. “This time, the chief of the Esquimalt nation, on whose land the synagogue stands, will be with us. I will blow a shofar as a symbol of the jubilee, and then we will present the ram’s horn to the chief.”

In the evening of June 2, there will be a gala dinner at the Fairmont Empress Hotel, attended by the mayor of Victoria, the lieutenant governor of British Columbia, and Miriam Ziv, Israel’s ambassador to Canada, among other distinguished guests. Irwin Cotler, a member of Canadian parliament, will give the keynote address on “Jewish Values and the Pursuit of Justice.”

According to Brechner, this major anniversary has spurred the congregation “to look at its grounding narrative, which is one of pluralism, collaboration, and a pioneering spirit.” Now a congregation of 200 member families and one of five Jewish congregations in the city, the synagogue has managed to survive and thrive through a century and a half of boom and bust times.

Its inception was during the 1858 Fraser Valley gold rush boom, which attracted people who had originally made their way out to California during its 1849 gold rush. Among those who made their way north to what was then known as the British Colony of Vancouver Island were a significant number of Jewish merchants. By 1859, they had bought land for a Jewish cemetery, and on June 2, 1863, they laid the cornerstone for Temple Emanu-El, as it was initially called. It is believed that the synagogue was named after the one of the same name in San Francisco.

Victoria’s Jews rose to prominence. The city’s second mayor was a Jew, as was one of the first two members of parliament from Victoria. Samuel Schwartz, the grandson of one of Emanu-El’s founders, was Canada’s first Jewish judge. However, “it was mostly a downward trend,” Fitch said in regard to Victoria’s Jewish population. With the extension of the railroad to Vancouver on the mainland, and the building up of that city, many Jews left Vancouver Island. “By 1948, we had only seven families paying dues,” Fitch said. “We almost lost the shul.”

Members of the public will be able to gain a glimpse into the congregation’s history though an exhibition of 100s of historical and contemporary artifacts on display in the synagogue’s social hall until mid-September. “There will be photos, artifacts, ritual objects and textiles,” said Janna Ginsberg, who has helped put the show together. Among the items are auctioneer billets belonging to a founding member, and musical compositions and baseball bats that belonged to Schwartz, who was, in addition to being a jurist, an accomplished musician and athlete. Other featured items will include a pioneer’s watch and a huppah made by the Hebrew Ladies of Victoria in 1864 and used at weddings for more than a century.

For Fitch, the most telling thing to look at is the impressive synagogue building itself. He noticed something just as critical as the crack in the ceiling — the seats. “When the synagogue was built, it had no more than 100 members, but it had 350 seats. It was built for the future.”