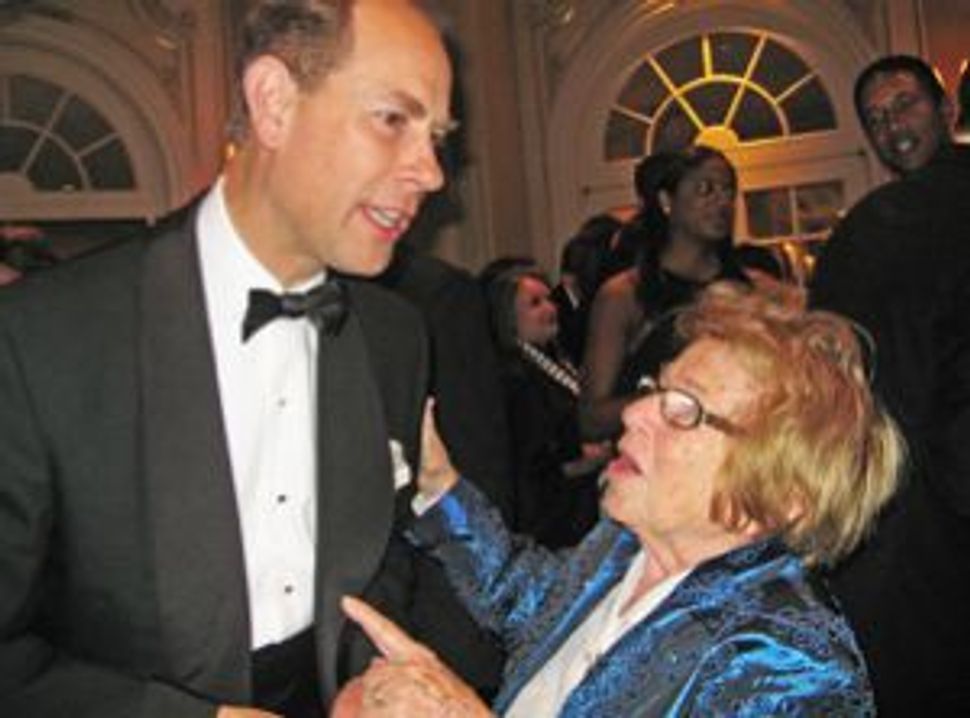 “Quick! Put down your drink! The prince is coming!” I called out to Ruth Westheimer during the pre-dinner mingling at the May 22 Red, White & Blue Duke of Edinburgh International Award Gala held at the Essex House. During my chat with Prince Edward, Earl of Wessex at the gala’s pre-dinner’s private reception, I recalled our meeting when he hosted this same event in 2011. Dr. Ruth, aglow in a shimmering teal blue satin ensemble, dashed to the over 6’ tall prince who graciously leaned to be at eye-level with the 4’10” petite sexpert. They shook hands and engaged in an animated chat. She told the “prince” she missed him when she was at Buckingham Palace because he had to be with his children… and that he looked wonderful.” Based on her animated signature index-finger pointing gestures, I suspect there may also have been some advice.

Following Moet champagne toasts “To the Queen” and “To the President of the United States,” guests were treated to a performance by two members of the Dance Theatre of Harlem.

Introduced as “Prince Harry’s uncle,” Prince Edward touted The New York Metropolian Area Program of the Duke of Edinburgh International Award Program. Since its founding by His Royal Highness Prince Philip Duke of Edinburgh in 1956, hundreds of thousands of young people ages 14 to 25 from all backgrounds have participated in numerous Award Programs in over 140 countries (including Israel where it was founded in 1985 and known as the Israel Youth Award in Herzliaya). ” Programs include fitness in sports, dance, career and college-ready skills, and self-reliance.

Among the guests: New York Rangers hockey great Rod Gilbert (with whom I reminisced in French about Old Outremont and Montreal). I also had a quick chat with dean emeritus of the Actors Studio James Lipton, “who studied with Stella Adler, and hosts the Bravo TV series “Inside the Actors Studio.” When I told him that his father, Lawrence Lipton [from Lodz, Poland], had been a columnist for the Jewish Forward, he shook his head. I told him I’d send him proof.