Plays That Test the Limits of Jewish Experience David Winitsky, artistic director of the Jewish Plays Project (JPP), wants to clarify something: “This is not ‘Old Jews Telling Jokes,’” he said. “Don’t get me wrong. I love that kind of comedy and Jewish humor runs through the festival’s plays. But we’re not looking for the next Neil Simon. We’re looking for the next Tony Kushner.” JPP’s second annual festival of new works is scheduled to run June 10 to 30 at the 14th Street Y in Manhattan. 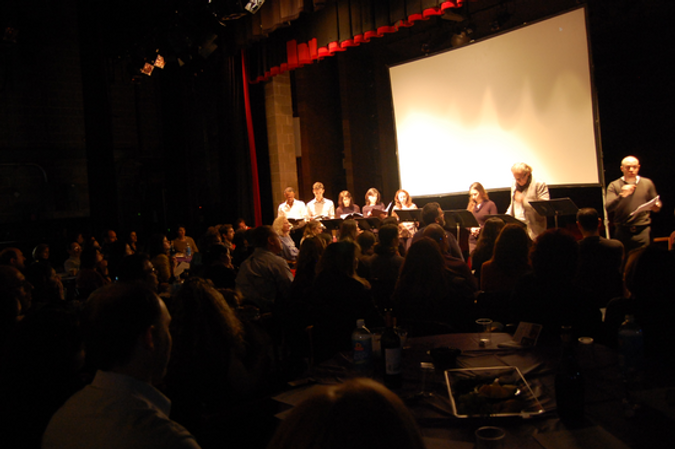 Landing a gig in the festival is no easy feat. Among 340 submissions from 26 states and eight countries 11 have been tapped for staged readings in either “Series A,” featuring six works deemed production ready, or “Series B,” presenting newer plays out for a first spin. The contest winner, “Estelle Singerman” by David Rush, will wrap up the festival on June 29 and 30 with a full workshop production. Industry insiders are invited in the hope that some of these works will move on to the next level.

Tapping plays that embody the most compelling theater experience is the festival’s primary criterion. But within those parameters, the scripts must reflect Jewish experience in some way, not least how “Jewish identity informs us as global citizens,” Winitsky noted. “We’re interested in how the Jewish belief system affects ethical decisions. We look for plays that deal with personal identity and what it means to be Jewish in a modern world.”

The plays, written by writers aged 25 to 40, are initially vetted by a panel of 45 artists and then chosen via audience vote in live events in Jewish communities throughout the Northeast.

Martin Blank’s bio-drama “Law of Return” is an obvious choice. It centers on Jonathan Pollard’s espionage career and the shadowy netherworld he inhabited. A creepy, almost non-descript figure with a deep commitment to Israel and to his cat, Pollard becomes a classic example of how life is stranger than fiction.

At the opposite end of the dramatic spectrum, playwright Misha Shulman’s “Martyr’s Street” hits a chord with identity politics. Set in a futuristic — arguably apocalyptic — Hebron, Shulman zeroes in on two embattled families, one Arab, one Jewish, and the unexpected, self-destructive bond they forge.

Awash in magical realism and comic elements, “Estelle Singerman” recounts the relationship between an eccentric, isolated older woman and an equally alone, emotionally disenfranchised middle-aged man named Warren. Foreseeing her imminent death, Estelle searches for someone to say Kaddish for her and decides that Warren is the one. They form an odd duo on an overnight journey through a surreal Chicago where they meet the angel of death in the form of a unicorn and a talking giraffe who speaks with an East Indian accent.

In some ways, the work is anomalous in its exploration of religion, oblique though it may be. In Jonathan Caren’s “Let Me Go,” a drama focusing on an end-of-life crisis, religious and ethnicity feel incidental. Despite a dying matriarch’s experience as a Holocaust survivor and a colorful rabbi’s presence throughout, the ethical dilemmas are not informed by the family’s Jewish roots. The daughter of the dying woman has a gentile boyfriend and like the ties among family members are not consistently binding.

Likewise, Gary Winter’s “Centrifugal Force” portrays an unraveling family that is coincidentally Jewish. The widowed father was married to a Hispanic woman and the adult son who lives a continent away rarely visits his deteriorating dad and delusional sister who makes her living selling bait and tackle.

But nowhere is the new Jewish family more strikingly drawn than in Adam Kraar’s “The Karpovsky Variations,” in which disparate family members meet up in airport lounges over the years as one or another flies off to some distant place.

In most of these works Jews are wholly assimilated and do not perceive themselves as the “other.” In Brooke Berman’s “1300 Lafayette East,” set in 1967 Detroit, a bored housewife forms a friendship with an aspiring African-American Motown singer. Despite far-flung worlds from which they emerge, the two women make a genuine connection. Still, in the end the troubling question remains: How authentic can that bond be? It’s an uneasy conundrum. But that’s what makes for a thought provoking, albeit disturbing play.

Winitsky is optimistic about the future of Jewish theater in general and the festival in particular, though he hopes to see more plays that explore ethnic and racial diversity within the Jewish community. “We have very little on Sephardic Jews and while we’re getting many more plays from Israel than we did last year I’d like to see more. But translations have been problematic,” he noted.

“It would be interesting to hear about civic life in Israel and what it’s like to live in a place where being Jewish is the norm. But we will need translators on board who are also playwrights and understand the nuance of theater. [In addition to their translating skills and mentoring role] their relationship with the Israeli playwright would also work as a kind of cultural exchange.”

Plays That Test the Limits of Jewish Experience