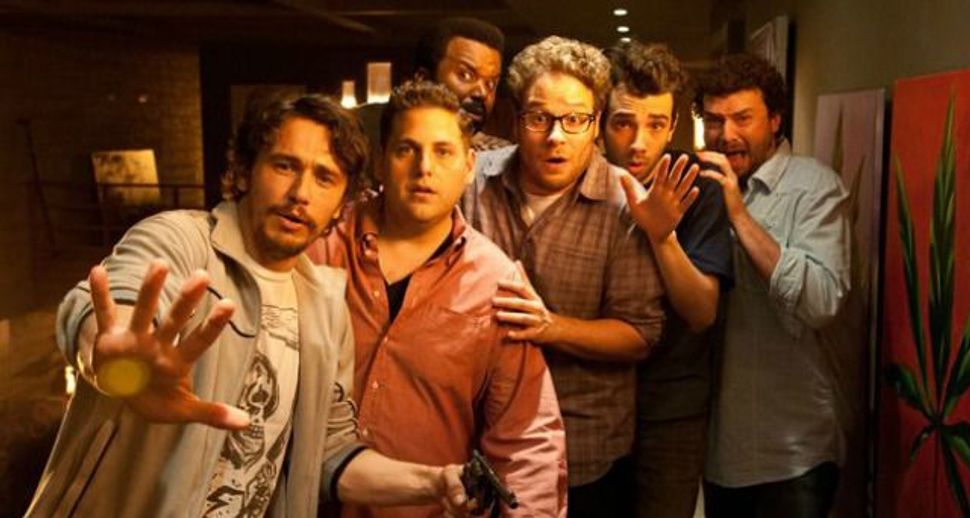 Rogen, 31, and Goldberg, 30, said that they wanted to push the boundaries of comedy by having actors play themselves dealing with an apocalypse in the film, which will be released in North America on Wednesday. 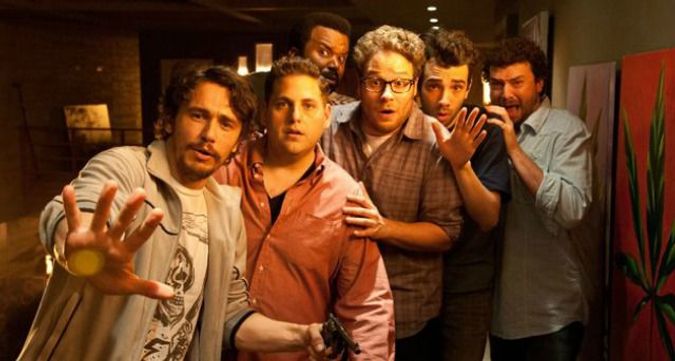 “It always seemed weird for all of us to all be in a movie and not acknowledge that we all somehow know each other, because we’ve been in so many movies together already. To me it was almost distracting that we didn’t play ourselves,” Rogen said.

“We’ve never seen it in a movie done like this, so it was exciting,” he added.

The revelers are interrupted by the apocalypse. Fireballs ravage the Hollywood Hills, leaving a trail of destruction and a giant fire pit that swallows up many celebrity guests, including pop singer Rihanna, in front of Franco’s house.

Rogen, Franco, Baruchel, Hill, Robinson and McBride survive by locking themselves into Franco’s house and proceed to engage in absurd survival stunts.

Hollywood has a long-standing fascination with the end of the world such as 1998’s space fantasy “Armageddon” and 2004’s environmental disaster film “The Day After Tomorrow.”

“This is The End” takes a unique twist by giving the topic an R-rated comedy treatment with celebrities playing themselves.

Goldberg said Rogen, Baruchel and Robinson play characters similar to their real identities, while Franco, Hill and McBride play a version of themselves far removed from reality.

“We’re friends with all (the cast) so they trust us … I think the fact that we knew all the guys really well made it so we could do what we did,” Rogen said.

Rogen, with his curly hair, thick-framed spectacles and unique rumbling laugh, has become a Hollywood poster boy for slacker films. Behind the scenes, both he and Goldberg are fast becoming big names in movie comedy.

Rogen and Goldberg said their biggest challenge for “This Is the End” was securing funding and convincing studios to come on board with the film’s premise.

“All the studios were against the idea of (the cast) playing themselves, which if you’ve seen the movie, seems preposterous. That’s the best part of the movie, without a doubt, but they were afraid of it,” Goldberg said.

After surviving the apocalypse, Rogen and Goldberg are moving onto their second directorial project “The Interview,” where Rogen and Franco will play journalists on a mission to “assassinate the president of North Korea,” Rogen said, calling it their “comedic ‘Argo.’”

The duo will also be making their animated film debut with an R-rated comedy “Sausage Party,” about sausages in a grocery store, teaming up with producer Megan Ellison of Annapurna Pictures, the company behind “The Master” and “Zero Dark Thirty.”

Watch the trailer for ‘This Is the End’: