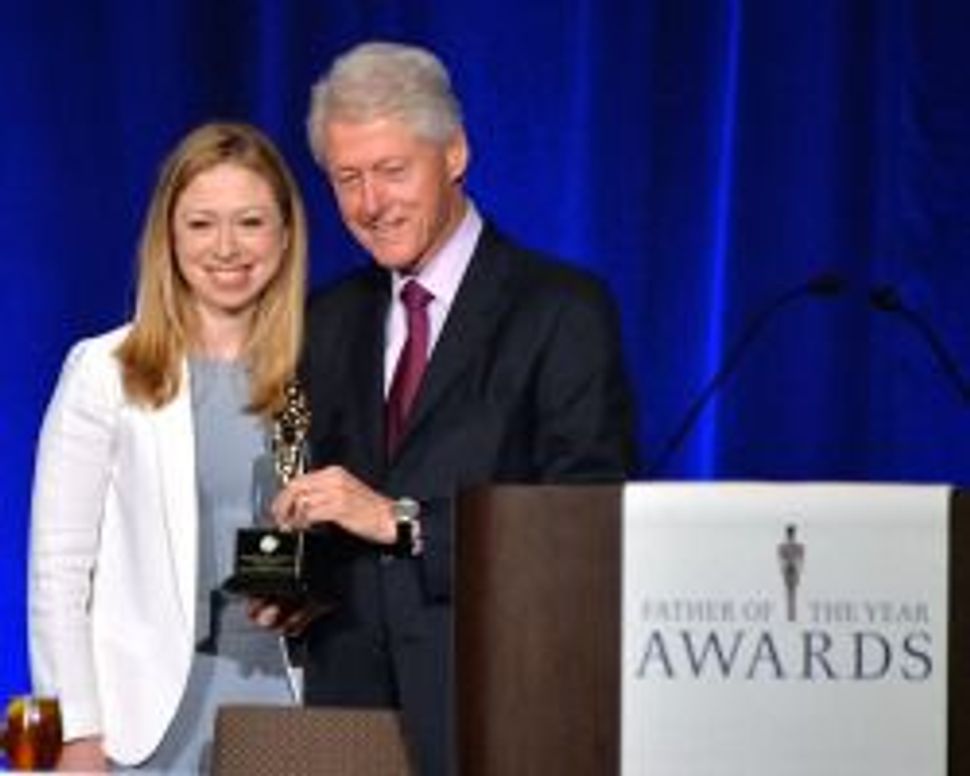 It’s not everyday that your achievements in fatherhood merit both recognition from the community and a TextFromHillary.

Former President Bill Clinton was honored by the National Father’s Day Committee at the 72nd Annual Father Of The Year Awards, during a lunch benefiting Save The Children on Tuesday. Presented with the award by daughter Chelsea, he joked:

“I [received] a text message from Hillary [Clinton] saying, ‘Congratulations. I think you deserve this.’ In our family, that’s a very big deal,” he said in his acceptance speech. The honor has been given out by the National Father’s Day Committee since 1942.

It’s unclear which was more significant (after all, quips from Hillary are rare gems.

Chelsea, whose presence at the ceremony was a surprise, gushed over her daddy.“Every day he’s my dad, and I don’t need an award to tell me he’s the best that I ever could have hoped for,” she said. “But I’m grateful he’s getting the recognition that I, of course, his unapologetically biased daughter, think he’s always deserved.”

The 33-year old added that hubby Marc Mezvinsky will have a hard act to follow. “Of all reasons that I’m proud of my father, I’m most proud that he’s my dad and that he’s always been there for me. And he’s set the bar very high for my husband, as Marc [Mezvinsky] and I think about having our own children,” she said. “He has always provided me a safe place to land and a hard place from which to launch.”

In his acceptance speech, Clinton added that despite his heavy load of responsibilities, first as Governor of Arkansas and then as President of the United States, his daughter has always been his first priority. According to Parade magazine, he concluded by recounting an episode from Chelsea’s birth, during which he had to fight with the hospital staff who wouldn’t let him be present for his wife’s Cesarean section “If you send her into that room without me, I think you’re making a big mistake … I want to see my daughter born,” he remembered saying. Eventually, the doctors gave in. “They let me go in and hold Hillary’s hand. I saw Chelsea come out, and it changed the hospital’s policy on letting fathers into the delivery room when surgery was required. And from that day to this, I have believed without the shadow of a doubt that it was the greatest thing that ever happened to me.”