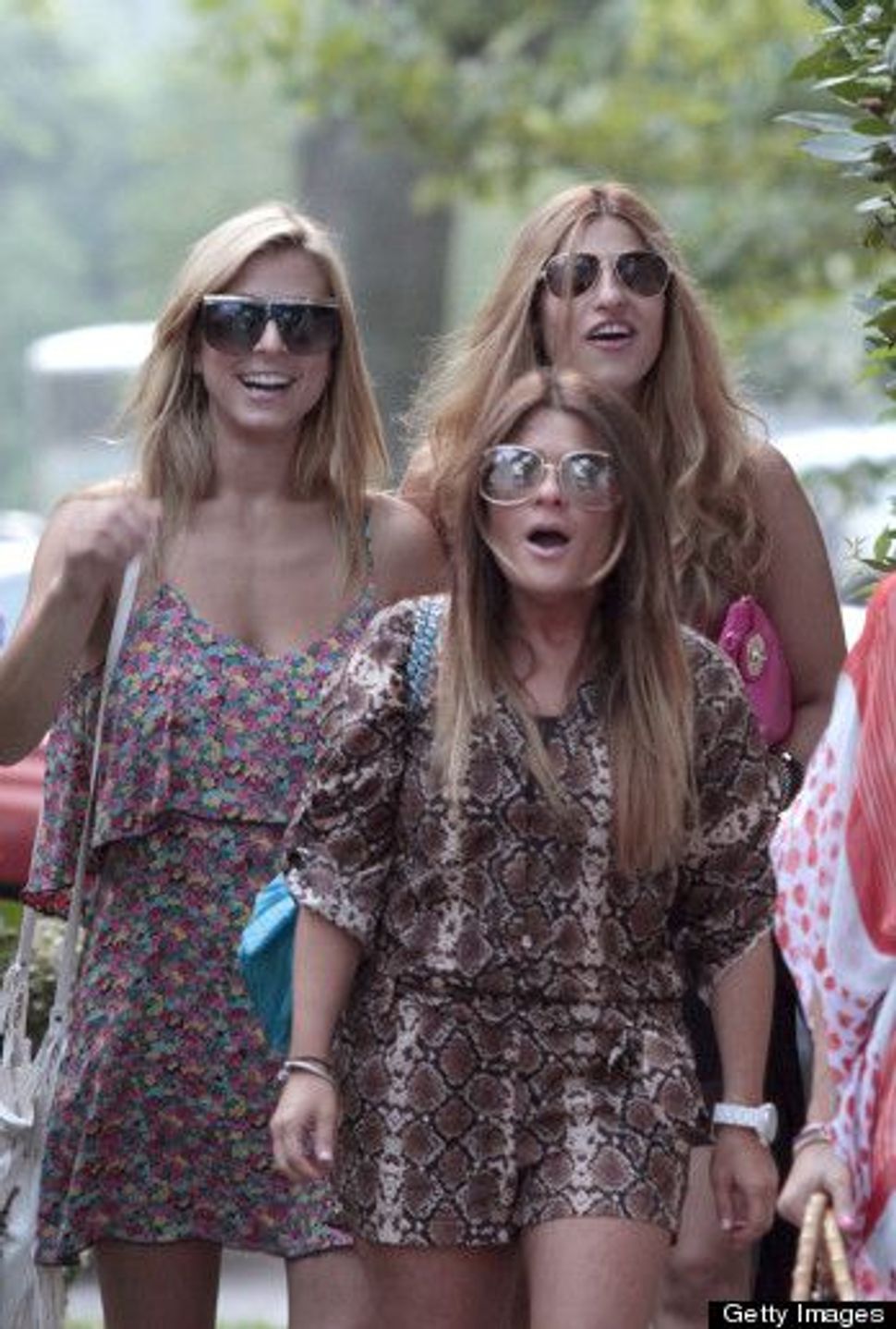 Image by Courtesy of Bravo

I had the idea to compare Bravo’s “Princesses: Long Island,” the Jewish-tinged reality show about aspiring Real Housewives, to Amy Schumer, the Long Island-born stand-up comic and star of Comedy Central’s “Inside Amy Schumer.” The idea was to talk about how misguided these Princesses were, and about how depressing it is that their goal in life is to marry a banker, lawyer, or doctor — it doesn’t really matter which, so long as he can afford to pay for days and days of shopping at the Americana.

The idea was to cast Amy Schumer as their foil: She was the one who got away. Amy was the one who escaped status anxiety and the need to measure her self-worth by how many men she dated and the shiney presents they give her. I would cast her as somewhere between a refugee and a role model. Look past the surface, young Jewesses and Forward readers! Look past the shock value of her humor. Look past the initial parlor trick of hearing a beautiful, polite-seeming blonde woman tell crude jokes about the most unglamorous parts of sex. Realize that Amy is actually a brilliant, hard-working career woman determined to blaze her own path.

But there are two problems with that review. First, “Princesses: Long Island” is a much sadder, darker show than I thought it ever would be. And second, “Inside Amy Schumer” is the most inventive sketch show on television. It throws all formulas out the window. It keeps sketches going. It allows them to twist and turn into something far richer and deeper. It challenges our impressions of women in comedy and then challenges the challenges to those impressions. It’s also an insightful commentary on dating, technology, and the breakdown of etiquette. (No, really.) “Inside Amy Schumer” is not always funny; sometimes it’s painful. But the effect is always exhilarating.

Amy Schumer is too old to be a Princess of Long Island. We’re all about the same age, Amy, the Princesses, and I. Schumer is newly 32, the Princesses range from 26 to 30, and I may write like an old man, but I’m still only 29. I could easily have met one of them at a party, a Bat Mitzvah, or a Jewish fraternity-sorority mixer.

Yet those extra two years make it impossible for Amy to be on the show. The not-so-hidden, Edith Wharton-esque theme of “Princesses” is that the older you become, the less-marriageable you are. Men are no longer interested in women above the age of 27. As if to prove this point, one of the show’s lead storylines is the relationship between the 26-year-old Amanda and her 38-year-old boyfriend. Amanda is one of the only Princesses dating anyone. It’s the only relationship that appears to have a shot at marriage.

Everyone else is in decline. “Coco,” who seems like a genuinely nice person, is lost and living with her parents. She’s certain she’ll never meet another man. Then there’s Erica Gimbel, 29. The other characters talk about her as if she’s hopelessly past-her-prime. Once she was the hottest girl on Long Island, they whisper. She’s now in an on-again, off-again relationship with a guy she used to keep on the back burner, in the friendzone. She’s a legend, a story you tell to young girls to warn them of life’s horrors. Once everything seemed possible… You couldn’t invite an unmarried 32 year-old woman with a career to go to the Hamptons with these girls, not even if she had a wildly successful TV show of her own, especially not if she had her own show. She would be seen as a tragedy.

In the end, however, what’s really disconcerting and depressing about “Princesses: Long Island” is that the show and the characters in the show exist in different moral universes. By that I mean, it’s an ideal for the subjects to marry young and live at home, not for the audience. We’re not supposed to approve of their choices; we’re supposed to judge them and question their motivations. We’re invited to watch them slink farther and farther away from their dreams of marriage, to watch them go to pool parties with men they don’t respect, and to act out 10-year-old feuds on their getaways. Here’s the Catch-22 of “Princess of Long Island”: in order to stay on the show, the girls have to stay unmarried and stay dependent on their wealthy parents for money. The moment they grow as people, they have to stop being characters on a screen. The saddest part of “Princesses: Long Island” is that Bravo wants us to root for them to fail.

I already enjoyed “Inside Amy Schumer,” but this is the sketch that made me realize how on-to-something new-Amy actually is. [WARNING: Sexual content ensues. I will be vaguely discrete, but I cannot talk about Amy Schumer without talking about sex.]

We open on a pure white room with a ratty brown couch in the middle. Amy faces the camera wearing only black boots and a robe. “Hi, I’m Amy Schumer and I’m proud to say that I’m a feminist,” she says. “That’s why today I’m hosting my very own gang bang.” She then talks about female empowerment and transforming from object to objectifier. It’s a nice little joke at the expense of women’s studies and feminist theory and particularly about the defense of certain types of pornography by feminist critics. It’s also a good joke about how Amy’s seen in the world of comedy, or how she’s seen by adult male fans. She’s seen as the girl who does “male” jokes. She’s seen as the one who gets why a rape joke is funny. She’s the rare funny woman because she understands “comedy.” She gets it.

That’s when Amy really starts to roll. A series of unattractive, lumpy men enter and Amy recoils. Them? She says that she’s not going to go through with it, and they start to leave. One of them says that’s fine. Amy is puzzled and demands to know why. He tells her that it’s because he isn’t that attracted to her. “As far as body types go, I’m more into that girl Whitney from that show ‘Whitney.’” Then, a second later he says again, “You’re cute, but you’re no Whitney.”

Am I wrong to hear this as a submerged critique of Hollywood? This isn’t a casual allusion to Whitney Cummings, the comedienne, creator and star of “Whitney,” and co-creator of CBS’s “2 Broke Girls.” Cummings, like Schumer, is known for her language and for using the word “vagina” on TV. Yes, Amy and Whitney have different body types, and yes, at least part of the joke is that this guy is one of the only people on the planet who watches “Whitney.” But the real reason to mention Whitney is to say something about the Hollywood system that only allows one woman to be the risque envelope pusher or that only allows one Black man to be the star of summer action movies. Only one, Whitney or Amy Schumer, may exist and have her own show. “Whitney” is a clue that there is so much more going on here than a joke about feminism or a joke about women comics. This is a meta-joke on top of a meta-joke about discourse. Or something.

It should be clear from my description of that scene that a lot of what I think is great about “Inside Amy Schumer” happens by accident. The show tries things. The core joke switches mid-sketch. “Inside” throws things at the screen to see what sticks: man-on-the-street reporting, sketches, stand-up, and hilarious mock-serious, mock-Charlie Rose conversations with people in unusual jobs. One episode “Amy Goes Deep” with a stripper; the next, a bodyguard; the next a dominatrix. She asks serious questions and politely teases them in response. This is not a show that knows where it’s going, but it might get there anyway.

To put it in a phrase that I can only hope will be blurbed, Amy Schumer embraces the discordances of modern life and becomes the comic laureate of the breakdown of etiquette. Her jokes are only partially about being a woman and gender. In one mad-cap sketch, Amy receives a sext from a guy. She tries to respond with a sext of her own. She grabs her iPhone and contorts herself, bending into acute angles to film the perfect selfie. She fails and fails and eventually calls a friend who sends over a professional sext photographer to help her shoot a picture that will look like she took it nonchalantly by herself. Yes, part of the joke here is about the steps that women take to look beautiful, to look “natural.” But the joke is also about the uncertainty in the 21st century and what we expect from each other. The joke is that we’re close to going from finding sexting inappropriate and degrading to normal, even expected. The joke is that we don’t know what’s taboo any more.

Amy Schumer sets herself up as the butt of her jokes, yet she’s really asking us to laugh with her. She wants us to laugh at all the weird rules and conventions of modern life, the ones that should be there and aren’t, and the ones that should have disappeared years ago. She wants us to see what she sees: how funny it is that none of us know what to do.