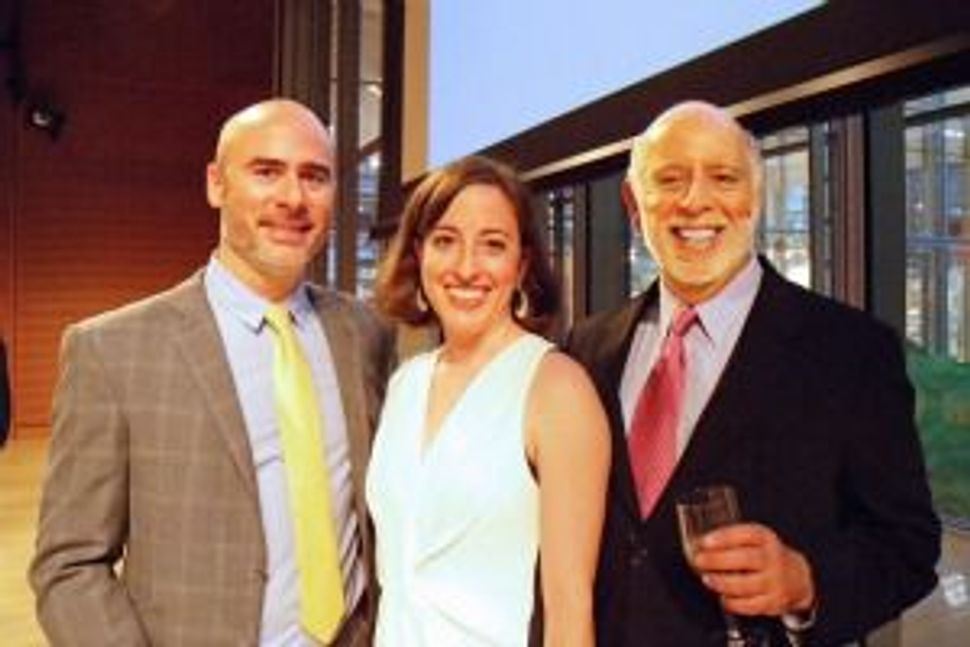 “Do you know why the sea is salty?” I asked Mark Russ Federman, third generation owner of Russ & Daughters during the champagne reception at the June 10 Foundation for Jewish Culture’s 2013 Jewish Cultural Achievement Awards at The TimesCenter.

Without missing a beat, he gave the classic shtetl wisdom answer: “Because herrings swim in the sea.” At opposite ends of the Yiddish mameloshn spectrum — he of the Galitzianer persuasion and me a Litvak — we parsed the merits of white fish, schmaltz and matjes herring, before he introduced me to the fourth generation Russ & Daughters owners — inheritors of the 100–year old company’s lox and keys — Niki Russ Federman and Joshua Russ Tupper.

“True story,” a farklempt Niki Russ Federman told the 300 festive guests. “A man walks into an appetizing store on the Lower East Side. He breathes in the aroma of the co-mingling smoked fish, pickled herrings,fresh breads, dried fruits and sweets. He breathes out, ‘Ahhh…I smell Judaism!’ That actually happens pretty regularly at Russ & Daughters.” Noting the upcoming centennial next year, she mused: “That’s 100 years of four generations’ worth of slicing fish, kibitzing across the counter and obsessing over quality… It’s 100 years of brises, bar and bat mitzvahs, weddings and inevitably shivas… Really — how else do Jews say ‘I love you,’ ‘I’m sorry for your loss,’ or ‘mazel tov!’ than with a fatty whitefish, a nice herring, bagels and babka?”

“I stand before you as a member of the People of the Pun. A Jew de Mots,” said award recipient Michael Chabon, Pulitzer Prize-winning author of “The Amazing Adventures of Kavalier and Clay” and the “Yiddish Policemen’s Union.” “I am the son and grandson of punsters and heir of Jewish punsters going all the way back to Abraham who couldn’t even name his son ‘Yitzhak’ without laughing about it. I can’t see anybody who claims to love language and fail to marvel at the beautiful slipperiness of meaning that puns — like aquarium nets — catch and bring shimmering to the surface.”

In her acceptance speech, award recipient Deborah Dash Moore, prize-winning author of “At Home in America: Second Generation New York Jews,” editor of “City of Promises: A History of the Jews of New York,” recalled a third grade class trip to do rubbings of manhole covers. “We learned simultaneously about the city’s infrastructure and the beauty of design in ordinary objects… Jewishness was also interwoven into the urban fabric.”

The evening also honored film producer Scott Berrie, founder and CEO of Impulse Creative Productions and president of Bard College [since 1975) Leon Botstein — a celebrated conductor and musicologist and principal conductor of the American Symphony Orchestra. The evening’s emcee was president emeritus of The New York Library, Paul LeClerc and the nibbles were inspired by Russ & Daughters.