Is Rick Moranis ‘Too Jewish’? 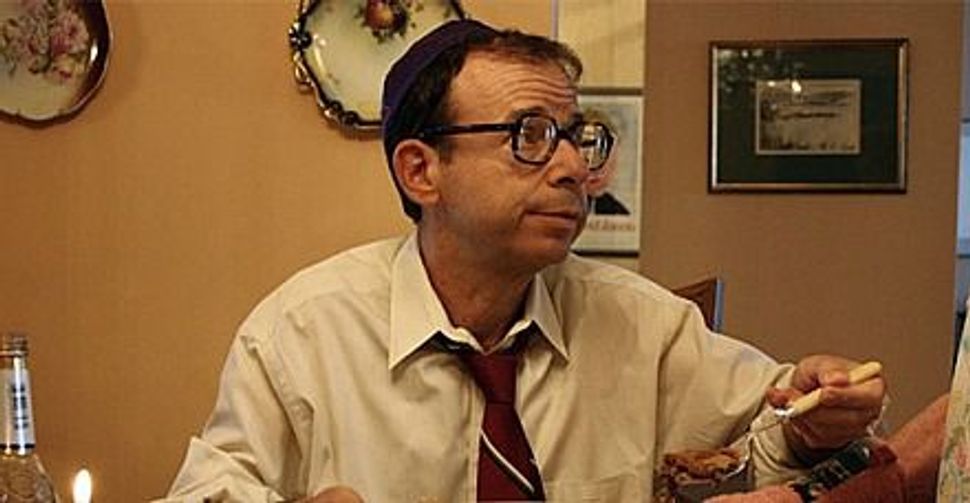 Writing about Rick Moranis required that I remind myself what he’s done. After all, his great comic roles in Mel Brooks’ “Spaceballs” and the first “Ghostbusters” movie are pushing 30. So I sneaked over to YouTube to watch Moranis order his starship to “ludicrous speed,” and in “Ghostbusters” ask, “Okay, who brought the dog?” 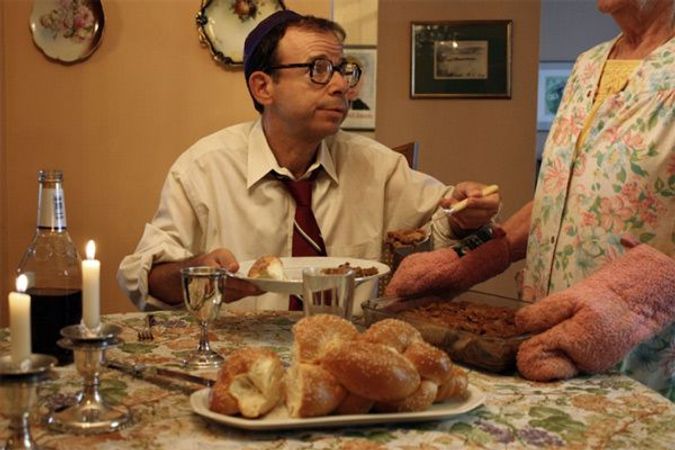 But what has Moranis done lately? Well, in 2005 he released a Grammy Award-nominated comedy song album called “The Agoraphobic Cowboy,” a parody of the freedom-loving cowboys that complain about being fenced in. And now he has an enjoyable new comedy album called “My Mother’s Brisket & Other Love Songs” that will please many in the Jewish community and provoke students of popular culture to wonder if Moranis will be the one to finally reach that frightening land of commercial failure known as “Too Jewish.”

On his website Moranis tells us that’s exactly where he’s headed. “When I first began writing jokes and sketches with various Jewish partners one of us would inevitably stop at some point and announce, ‘Too Jewish!’ Too Jewish for the star, the show, the network, or the audience. The songs on this album are all in that category.”

Yes, they are. And some of them are terrific. In the klezmer-style “Pu-Pu-Pu,” the Toronto-born Moranis pays homage to the sanitary North American version of the Old World spitting that helped ward off the evil eye.

We ran into the Feldmans
Man did they look great.
Mindy graduated with a three point eight
Milty says they’re just about to renovate
And don’t tell anybody but Debbie is late.

“Kiss My Mezuzah” is a Jewish “Baby, It’s Cold Outside.” Moranis-as-seducer shows off his apartment and woos his love with, “Blessed are you, and oh yeah me too / You’re in the home of a mensch.” “Brisket” is up-to-date, not nostalgic, and so can lampoon society’s latest excesses. The man who wants his mezuzah kissed shows off his “60-inch plasma,” and in another song a social media obsessed guest records that “I’m fressing with one hand so I can live blog.” Live blog what? “The Himel family bris.”

It is easy to see why Moranis cites early 1960s Jewish song parodist Allan Sherman as one of his inspirations. Sherman was among the first to be warned that his Jewish material would cause him to fall off the edge of the earth. Instead, his three “My Son” albums led Sherman to a land of fame and riches. It is kismet, then, or bashert, that “Brisket” ushers in this summer’s 50th anniversary of Sherman’s “Hello Muddah, Hello Fadduh.” (And would it kill you if I should plug my new Allan Sherman biography, ”Overweight Sensation” that’s gotten such nice reviews? Pu-pu-pu!)

The cover art on “My Mother’s Brisket & Other Love Songs” features a Friday night Shabbos table complete with candles, silver Kiddush cup, a four-sided wine bottle that announces from across the room it’s Manischewitz, and a challah. At the center of it all is Moranis, helping himself to some brisket offered by a motherly figure wearing a frumpy housecoat and oven mitts. On his head, Moranis wears a yarmulke. It is brown and almost invisible against his brown hair. Would a white yarmulke have been too Jewish? Maybe not. But before we go crazy let’s see Brisket’s sales figures.

Listen to ‘Pu Pu Pu’ from ‘My Mother’s Brisket & Other Love Songs’:

Is Rick Moranis ‘Too Jewish’?