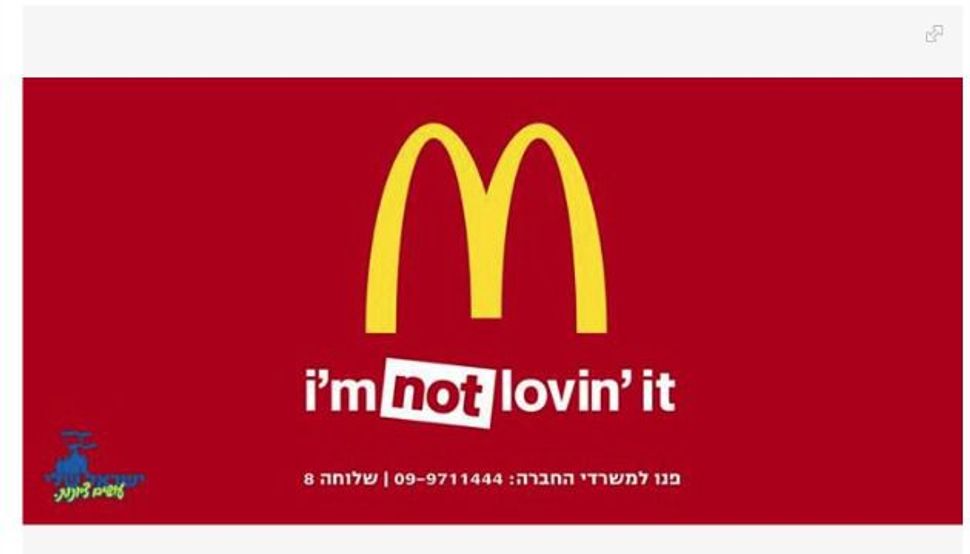 The battle between Israeli settlers and the worlds most recognized fast food chain, which began earlier this week with McDonald’s decision to prevent the opening of a new branch in the West Bank, just went up a notch.

The leaders of settlers groups are now calling for a boycott against the hamburger empire.

“McDonald’s has turned from a business into an organization with an anti- Israeli political agenda,” said Yigal Delmonti, deputy director of the Council of Jewish Communities of Judea, Samaria and the Gaza Strip, in an interview for the Jerusalem Post. “We expect that Israeli citizens, especially those living in Judea and Samaria, will take this into account before entering the company’s franchises.”

A poster altering Mcdonald’s campaign slogan from ‘I’m Loving It’ to ‘I’m NOT Loving it’ was posted Thursday on the Facebook page of My Israel, a right wing grassroots group founded by MK Naftali Bennett , the leader of the Bayit Yehudi party which is part of the Israeli government. Also published in the same post was the phone number of the offices of McDonald’s-Israel and a request to supporters to flood the company with complaints.