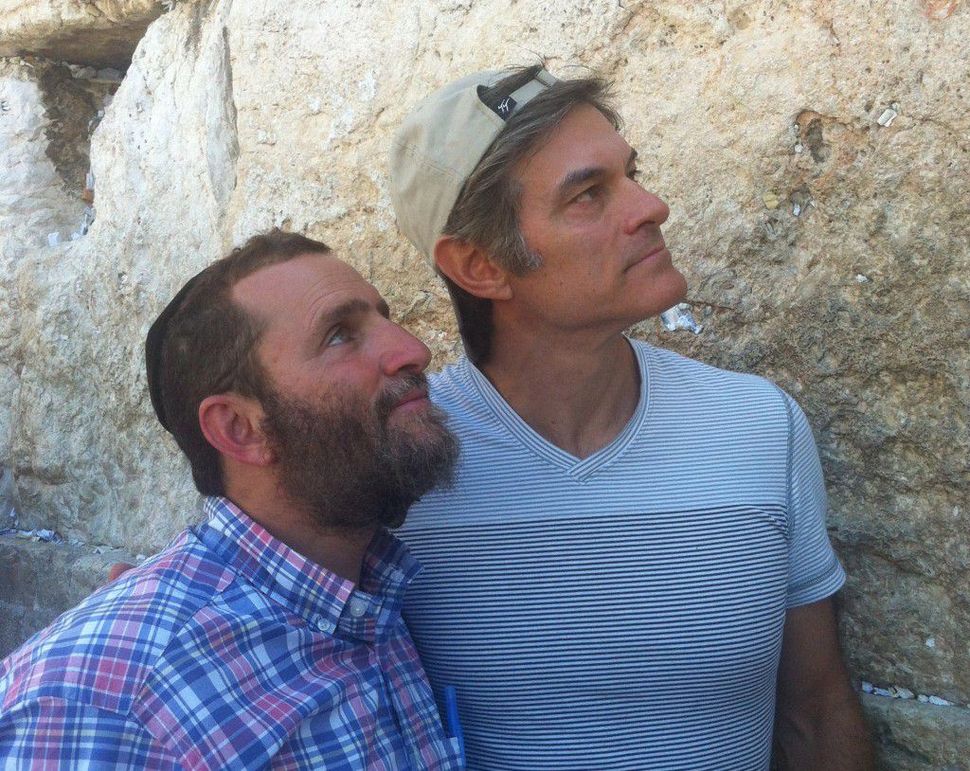 (JTA) — Dr. Mehmet Oz sat down to talk with JTA on the Tel Aviv coast last week, but what he really wanted to do was go to the beach.

Oz, the surgeon and well-known TV personality, was in Israel for the first time and had a packed itinerary. He traversed the country from the Red Sea to the Golan, lectured Israeli physicians in a northern Israeli hospital and met with Prime Minister Benjamin Netanyahu.

His host on this whirlwind tour was Rabbi Shmuley Boteach, the author and sexpert who lives in New Jersey. The two met when they were both on an Oprah Winfrey radio program. Boteach recently gave Oz an award for being a “champion of Jewish values,” and the trip was paid for by casino mogul Sheldon Adelson, another recipient of the award.

A Muslim of Turkish descent, Oz delivered a relatively conservative line on Israel in an interview, even casting doubt on the viability of the two-state solution. He also explained why he went to Hebron and Psagot, two controversial Israeli settlements deep in the West Bank.

BEN SALES: What drove you to come to Israel and what has surprised you most about the country?

DR. OZ: I come every summer to Istanbul and keep meeting Israeli tourists. What was most surprising was that I knew about the historical sites, I traveled the whole country, and I know now that that’s the tip of the iceberg. What’s special is the energy of this nation, which was able to build a thriving modern society out of the desert. Israeli-Palestinian negotiations restarted recently and it’s assumed that any final deal would involve the dismantling of Israeli West Bank settlements. Why did you decide to visit Hebron? Was it problematic for you as a Muslim?

I went there especially because I was a Muslim, to the burial place of the patriarch of my religion. Hebron meant connecting to a place that represents that connection, and to be able to see Islamic writing, Jewish writing, Christian writing and all three [religions] worshiping at the same tomb.

I went out of curiosity to see a place that is sacred to me. There will be political discussions forever, and we should follow an inner instinct. I went with love in my heart.

In addition to practicing Western medicine, you’re a big believer in non-Western cures and you preach the importance of patients having a positive mindset. In that regard, what’s your takeaway from Israeli culture and Jewish values?

It’s difficult to understand the world if you don’t understand Israel. There’s a clear intersection of Jewish values, modern society and coping with the modern world. In a society like Israel, where there’s tremendous stress, it is important to remember those deep values. If you don’t love yourself you can’t love your neighbor.

The most important thing in life is to have purpose. If you give your heart a reason to keep beating, it will always keep beating. Because of their will to take on the physical forces of the desert and their neighbors, [Israelis] have a clear purpose to change the world.

What has been the most challenging part of the trip?

We were driving and I saw workers from South Asia, and I wondered, “Why are South Asians working in these fields when there are workers who live in the West Bank?” We must find a way for people to work together peacefully.

There are such wonderful opportunities to work together. We should build a bigger pie. Israel is a microcosm for so many problems you have around the world. It’s the gold standard of conflict. If we could solve this, it’s a toolkit for solving other problems.

How has visiting Israel and the West Bank changed your perspective on the Israeli-Palestinian conflict?

You learn about the fictions you create around solutions. It would be very difficult to pass laws that intersect between people living next door to each other. It’s not as easy as being for or against it. You realize it’s much more difficult. It’s much grayer. It’s not black and white.

The ultimate solution will be driven by financial means. Peace is an imperative for that. When people love their children so much, they’ll do whatever it takes to make their future brighter.