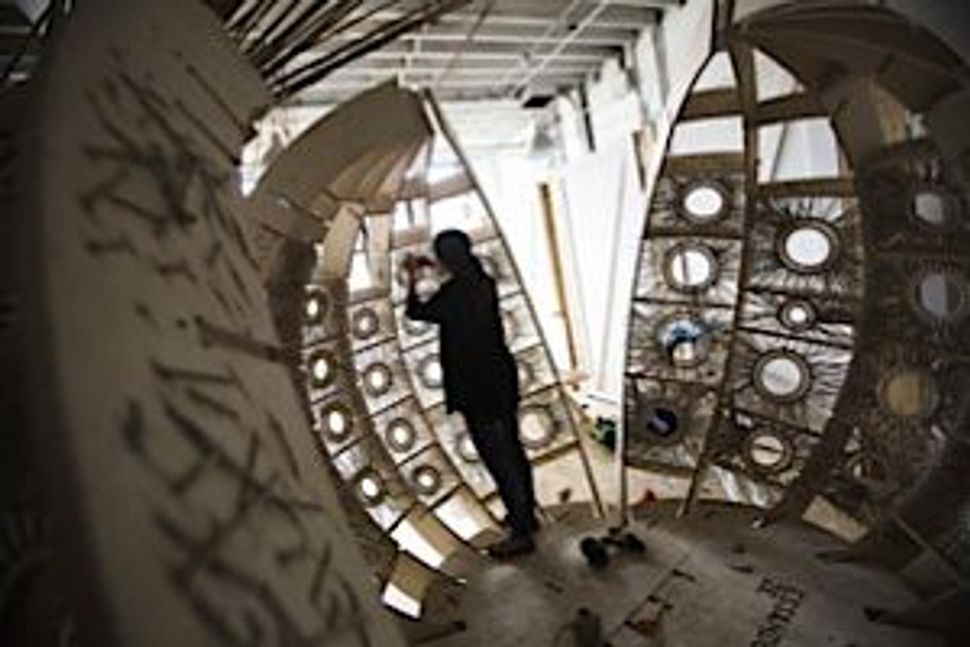 Fortunately for us, Jason Hutt decided not to let another Festival of Tabernacles go by without completing his “Sukkah City” documentary film about the 2010 architectural design competition and exhibition of the same name. Having had its world premiere in Jerusalem this past summer, the film is now ready for Jewish holiday prime time, with New York screenings next week, during the intermediate days of Sukkot. One screening will take place in Union Square, where the contest’s 12 winning designs stood three years ago for just two days.

Although Hutt, 36, is not an architect or designer, he answered the request for proposals issued by Sukkah City co-creators journalist Joshua Foer and Reboot co-founder Roger Bennett in the summer of 2010. A filmmaker focused on how creative, innovative lenses can be applied to Jewish tradition, Hutt told the creators he wasn’t interested in designing a radical sukkah, but instead in building a cinematic narrative chronicling this unprecedented venture from start to finish.

Impressed with Hutt’s idea, and perhaps also seeing the filmmaker’s last name as a sign, Foer and Bennett decided to give him full access as the project unfolded. The result is a 67-minute-long exploration of how cutting-edge architectural design and highly thoughtful craftsmanship can inform and interpret a 3,000 year-old Jewish ritual structure for the 21st century.

It is equally intriguing to learn how the architects (almost all of whom are non-Jews) were deeply affected by designing and building a sukkah. (For some of them, this was the first time they actually built a structure with their own hands). Challenged, rather than deterred, by the strict Jewish laws prescribing how a sukkah must be built, they embraced the metaphysical concepts behind the temporary structure. This motivated them to think far outside the box (or in this case, the booth), leading to sukkahs resembling bubbles, porcupines, funnels and cocoons. It seems the theological notion that adherence to the laws leads to greater freedom played itself out in terms of the the wildly imaginative designs that emerged.

“It was an intense day with a lot of passionate discussion,” Hutt recalled. “But with my small, [unobtrusive] video camera, it seems they were open to letting me be part of that experience.”

“Sukkah City” which has a chronological arc, ends with throngs of New York’s everyday citizens coming to see the sukkahs. You’ll smile as a girl exclaims how the sukkahs remind her of clubhouses and that she wants to build one. You’ll chuckle as a couple of Orthodox school boys earnestly take a tape measure to one sukkah, make notes with pencil on notepaper, and question its kosher-ness, but admire its design. Ultimately, you will be moved by how for two days, an obscure Jewish ritual object is the center of attention in the country’s largest city.

Some of us are still sorry we were unable to make it to New York to visit the extremely short-lived exhibition. However, we should be far less so after seeing this film. They say that good things come to those who wait, which in this case is an edifying behind-the-scenes tour of Sukkah City that wasn’t available three years ago.

Upcoming NYC screenings are on September 22 at 7 pm in Union Square – North Plaza; and on September 23 & 24 at 7 pm at the JCC in Manhattan.