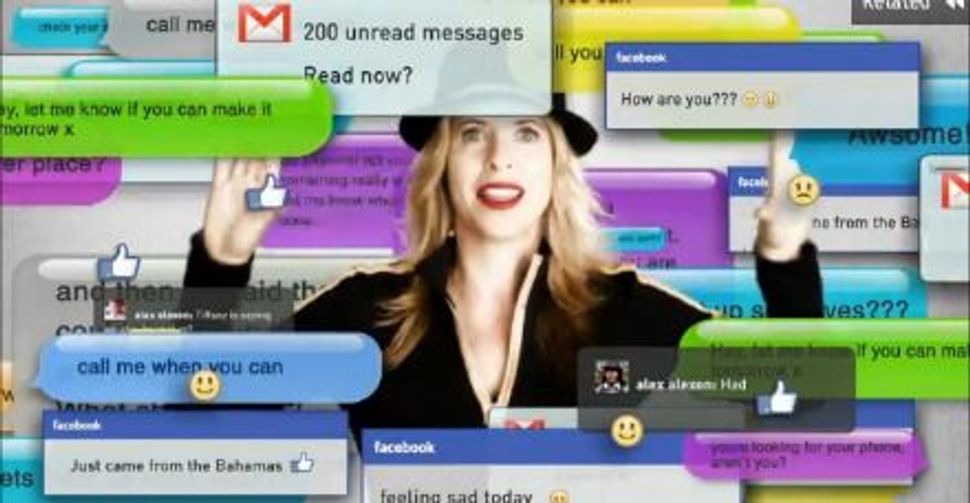 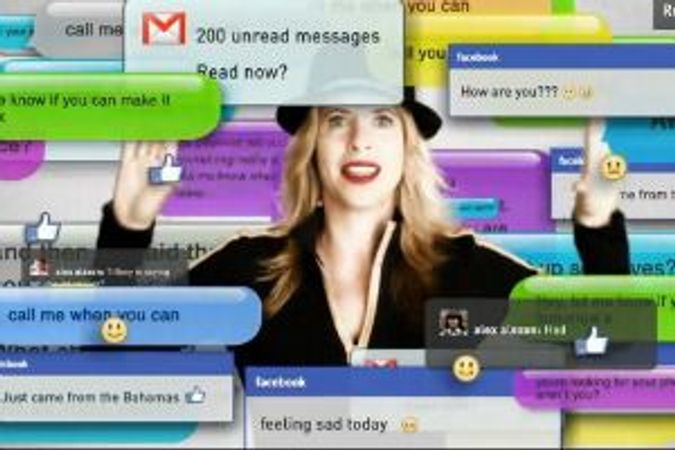 Tiffany Shlain has a lot of ideas.

But until fairly recently, the 43-year-old founder of the Webby Awards was reluctant to own them on film. No longer — in her new web-series, “The Future Starts Here,” which premiered October 11 on AOL, Shlain is loud, proud and vocal about thoughts ranging from 21st century motherhood, to acceptable online etiquette (hint: Emails masquerading as the great American novel are a no-no.)

She also has a thing or two to say about the tribe she’s such a proud member of.

As a self-described “filmmaker, woman and Jewess (‘I love that word, we need to bring that word back.’)” Shlain’s work has explored the various connections that exist between community and technology and the role both play in shaping the future. Her 2005 short film “The Tribe,” traced the history of the Jewish people through the lens of the Barbie doll, created by Ruth Handler in 1959. In “Connected: An Autobiography About Love, Death & Technology,” Shlain brought things even closer to home, exploring technology and science through personal experiences like her father’s fight with brain cancer and her own high-risk pregnancy.

Next on the list? “The Science of Character,” a film shot using Shlain’s “Cloud Film” method, gathering footage through submissions from people all over the world — the idea train rides on.

In honor of Ada Lovelace Day, which celebrates women in technology, the Forward’s Anne Cohen chatted with Shlain about unplugging for Shabbat, finding her voice, and her advice for women seeking jobs in male dominated fields.

Anne Cohen: You chose to open “The Future Starts Here” with an episode about “Technology Shabbat.” What is that?

Tiffany Shlain: Technology Shabbat is [something] my family and I have been doing for 3 and half years. I’ve been with my husband for 17 years. He’s Jewish [and] actually did Shabbat growing up which I thought was really beautiful. I did not — I’m much more of a cultural Jew. I’m part of Reboot [an organization that encourages Jewish innovators and thought-leaders to engage and impact the Jewish world in creative ways] and they were doing a national day of unplugging. I had just lost my father (American surgeon and author Leonard Shlain), and I was thinking a lot about how little time we have on this earth, so I [asked my husband] ‘Can we really take this seriously?’ We did it, and it was such an amazing experience. We’ve done it every week since and it’s changed our lives.

So, why open a web series with a video about unplugging?

I think out of all the episodes, it most clearly shows my struggle. And that’s very Jewish too — Israel means to wrestle with God. I’m wrestling with [technology]. I love it and I hate it and I hate how people are so not present anymore. “Motherhood Remixed,” which is a lot about my thoughts about being a working mother in the 21st century, used to be the first one. And we realized that “Tech Shabbat” really sets the tone for the whole episode because in all aspects I’m kind of going through the good, the bad and the potential of technology and to be mindfully using it and directing how we use it to shape the future.

What are the first words that come to mind when you think about Jews and technology?

When I think of the web and Jews, it’s very Talmudic in a lot of ways because people are commenting on comments and comments. And there’s also something about Jews all over the diaspora and the Internet and technology reconnects us in all these new ways.

How does your Jewish identity inform your relationship with technology?

It informs everything! My Jewish identity is the lens [through which] I look at the world: always questioning things, I always feel like I’m doing things differently — always somewhat of an outsider of the norm. Those are all very Jewish things.

In “The Tribe,” you asked: “What does it mean to be a member of any tribe in the 21st Century?” A recent study on American Jews released by the Pew Research Center showed that more and more Jews are marrying outside the faith, and that those who do tend not to raise their kids Jewish. What does that say about the Jewish community in 21st century?

I think people are always worried about [assimilation]. When I made ‘The Tribe’ that was actually something I was tackling. But I just don’t buy it. I see so many people around me reinventing, rethinking, re-shaping old traditions for the 21st century. I mean big synagogues do not work me at all. I love the intimacy of Shabbat, I love reimagining what tradition and ritual are, which is what the tech Shabbats are about. I feel like we have been through much worse than assimilation and we’re still here. I believe in Jews caring about the lineage and the tradition, and I see the most incredible creativity being applied to Judaism.

Technology and programming are fields predominantly dominated by men. How did you feel starting out as a woman and launching the Webby Awards in 1995?

It’s never been an issue for me. I was raised by two feminists: my mother and father were both feminists. The Internet space is really exciting because a lot of my female director friends are directing their own shows and series. I was also a woman in technology when there were very few women but I never think about that I just do my own thing and hire a lot of women and I have a lot of women mentors and funders.

How did you start inserting yourself and your personal history into your work?

It’s only been in the last four or five years that I’ve been in my own films. I think turning 40, [I thought] ‘Why am I having other people read my words?’ It was a big epiphany. These are my ideas, these are things I’m thinking. So why do I need a man to say it? So, it was really about moving my life from the third person to the first person and owning my voice.

How can technology empower women to collaborate on feminist goals?

The web plays to all female strengths. It’s about empathy, it’s about connecting, it’s about collaborating, it’s multi-tasking. I always say it’s not the World Wide Web, it’s the woman wide web, it’s completely made for us. My father wrote a whole book about it, in “The Alphabet Versus the Goddess,” he wrote how the alphabet kind of rewired culture’s brain to be more patriarchal, and took women down. Now that we are becoming more visual as a society, women are on the rise.

I think everyone is going to be online in like 10 years. I used to really be worried about the digital divide in the 90s; I’m not at all [anymore]. My 10-year-old daughter has been coding with this program in beta called Tinker and it’s a visual programming language. I think there is a barrier — there are image people and there are numbers people. I think that people aren’t comfortable with coding because it’s in a language that they’re not familiar [with]. The fact that there’s now a visual language to code I think is going to bring so many more people into codes, just like the Apple computer was a visual way to use computers.

There are so many more tools available to program, code, to reimagine the world and create solutions and new ways of engaging with the world with all of these new tools. I think it’s a very exciting time to be alive.

What’s your message to young women seeking to go into filmmaking or technology?