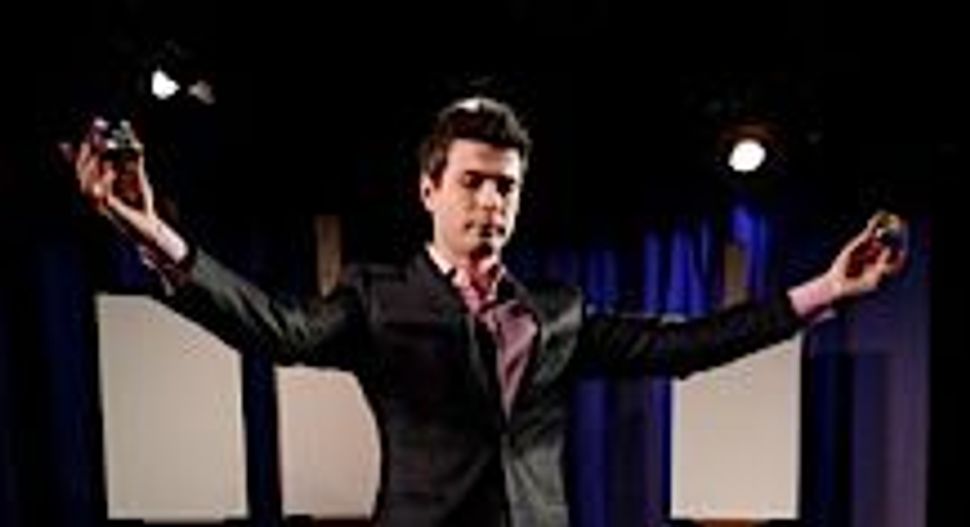 From an early age, mentalist Asi Wind knew he had to prove himself in some spectacular way. The Tel Aviv native was dyslexic, but not diagnosed as such, and everyone assumed he was slow and dim-witted. 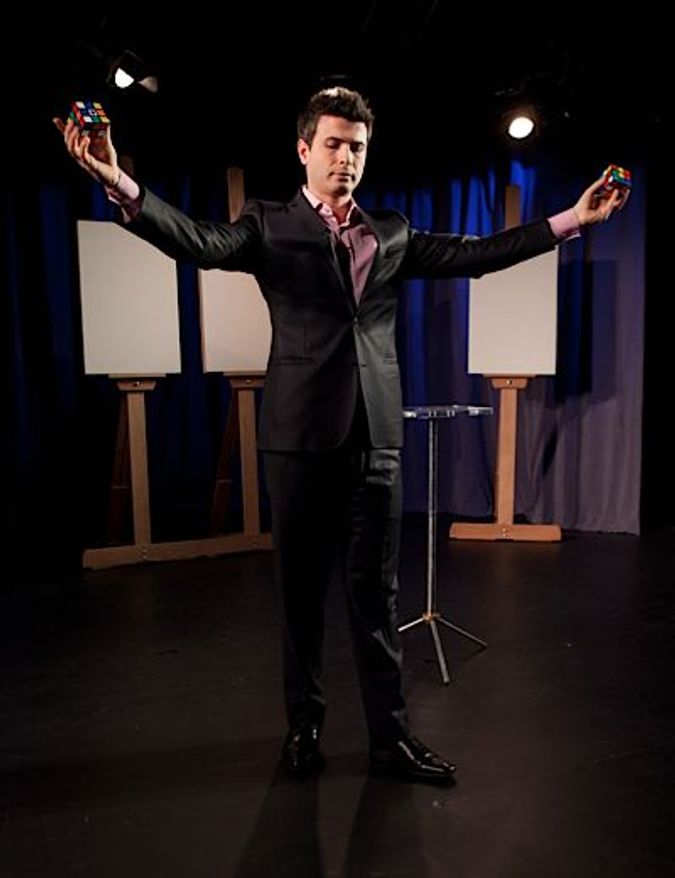 “And I believed it about myself,” he said with a slight Hebrew accent. “It was an enormous weight. Every thing was a struggle. Focus and concentration has been my biggest challenge.”

That’s hard to fathom in light of his mind-blowing memory, not to mention his stunning magical skills, displayed in his show, “Asi Wind Concert of the Mind: Exceeding Human Limits,” now playing Off-Broadway at the Axis Theater (One Sheridan Square), through October 30.

Evoking an easygoing host at a party, Wind quickly solves two Rubik’s Cubes, one held in each hand, instantly remembers the order of cards in a thoroughly shuffled deck, and identifies everyone in the audience by name simply on the basis of greeting each theatergoer in the lobby before the show. It’s general seating so he has no way of knowing who is sitting where ahead of time.

“When we introduce ourselves to each other I am able to tie a name to a particular expression or outstanding feature,” he said. “Everything I do in the show is in the realm of the possible, though I’m trying to push the limits of what’s possible to new extremes.”

Wind describes himself as a cultural heir of Houdini — not Uri Geller — asserting that 20-plus years of self-training has given him the skills he now has.

From the outset Wind was drawn to the magic shows he saw on TV, at birthday parties, and magic shops. Magicians were “super-heroes,” he recalled. “They redefined the possible.” Though magic clearly has a universal appeal, it’s especially popular in Israel where, interestingly enough, mentalists far outnumber the card and rabbit magicians. “Israelis love anything to do with the power of the mind,” Wind continued. “We’re fighting for our identity, our land, our nation. We’re surrounded by enemies and always on that road to survival, which makes us push and try harder. Intellect is essential.”

In 2001 Wind moved to New York to give his talents a shot on this side of the Atlantic, but he was fearful, not least thanks to the language barrier he faced. Nonetheless, he booked several touring shows almost immediately, performing alongside musicians and comics. In his spare time he studied English and supplemented his income twisting balloons into various animal shapes on the street.

Mercifully, his rugged times were short-lived and it didn’t take long for him to develop a following that included such celebrities as Woody Allen and the late Paul Newman and he is now serving as a consultant to David Blaine on his upcoming TV special. Most impressive, his peers have honored him with the International Merlin Award for the Most Innovative Show, an award previously presented to David Copperfield and Penn &Teller.

Aside from boasting extraordinary skills, Wind aspires to originality, showmanship, and human connection. If the audience leaves the theater feeling delighted and empowered he has done his job. Though he is very much the rationalist, magic has to have that elusive sense of mystery.

Wind admits he has a complicated relationship to religion. He grew up in a traditional Jewish home and as a kid loved his rabbi, a terrific storyteller and showman. “He was an early influence,” Wind remarked. “But even more important, he had a great sense of humor, was fun, and accepting. He didn’t push religion on you. He was a wonderful human being.

“I wish all of the religious experience I had was like that,” he continued. “Unfortunately, I also experienced another kind of religion. It was forceful, judgmental and critical. For me the whole idea of freedom of opinion and expression is very important. Painting is my other passion and I express those feelings in my art.”

Wind’s thoughts are now focused on his show and future, although he eschews the notion of an “ultimate goal” because that suggests something definitive and final. “And then where do you go after that?” he asked rhetorically.

Before ending the interview I challenge him to describe what’s on the magazine page I’m clutching — it is page 20 I tell him — and one of among dozens of pages that he ripped from a magazine the night before, distributing tear sheets at random throughout the audience.

Without missing a beat he said, “It’s an ad for the Bartok Quartet Cycle that will be performing at the Metropolitan Museum of Art. Tickets can be purchased for $40 or $100 for all three concerts and tickets will also be available for kids at a special price.”

That is exactly what is on the page.