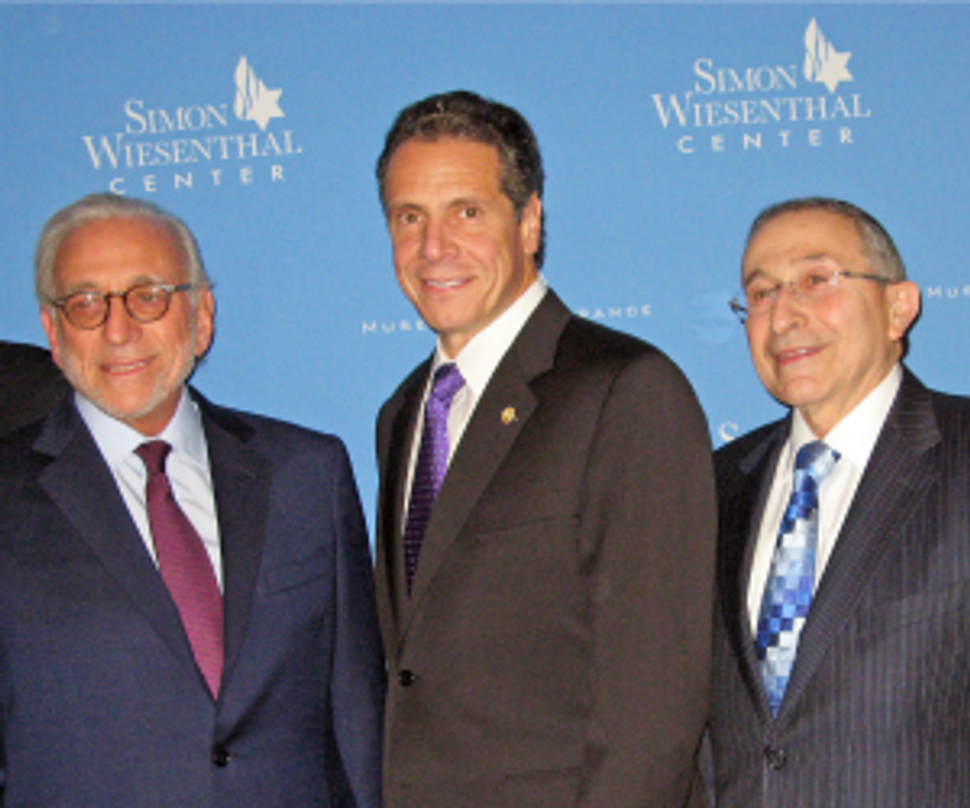 In what was its most successful event, the October 16 Simon Wiesenthal Center’s Humanitarian Award dinner at the Waldorf-Astoria raised a whopping $1.6 million.

Dinner chair Nelson Peltz introduced the Center’s Distinguished Service Award recipient —New York State Governor Andrew Cuomo who good humouredly led off with: “When Nelson [told me] ‘I didn’t vote for you,’ I thought it was a joke. He wasn’t kidding.” Cuomo touted Peltz, CEO and founding partner of Trian Fund Management LLP, as “an icon of the American dream, a great American and New Yorker, a great philanthropist.”

Touting the Wiesenthal Center as “a living memorial to the memory of a great man — Simon Wiesenthal — who died eight years ago at the age of 96, sixty years after his liberation,” Cuomo said: “Now some will say that the Center’s mission is complete.” Apropos the emergence of anti-Semitism worldwide, Cuomo cited incidents in France when “last month a group of Jews were attacked by a gang of teenagers…in Spain two months ago…’Adolf Hitler was right’ was painted across a bullfight arena…. It is very much a real threat in the world we live in…. So Simon Wiesenthal was right and you are right to be here this evening. We need a strong Israel and we need a strong America…working hand-in-glove because they are the bulwarks for democracy on this globe.”

“Anti-Semitism around the world has never been stronger and more dangerous,” Rabbi Marvin Hier, founder and dean of the Simon Wiesenthal Center, declared. His documented scroll of statistics included: “an estimated 150 million Europeans harbor anti-Jewish sentiments…. Seventy years after the Holocaust, in the same country that initiated the Holocaust, a study showed that 20% of Germans living today are anti-Semitic.”

Speaking with the help of an interpreter, 86-year old Medal of Honor recipient Czeslawa Zak — who was a young girl in Warsaw when her parents helped harbor 14 Jews from 1940-1944 — played down her family’s heroism. The family was designated as Righteous Gentiles at Yad Vashem. During the reception I got to chat with Ambassador Yehuda Avner author and star of the Moriah Film documentary “The Prime Ministers” and shared some pre-war Warsaw memories with Zak, who joined me in singing Polish folk songs.

The Wiesenthal’s newly opened exhibit/installation in Los Angeles in memory of Anne Frank brought back my 1982 visit to the Anne Frank house where we chanced on an elderly British couple musing: “One wonders if it really happened?” I retorted: “Does one also wonder about the London Blitz?” They apologized. “Yes. Yes. It must have happened.” In Litvishn Yiddish I asked an elderly German woman [from Aachen] with granddaughter in tow, why she came. In German she replied: “My neighbors, my friends, they were taken away in the night to Theriesenstadt…” Tearfully she added: “Ach ja! She needs to know this.”