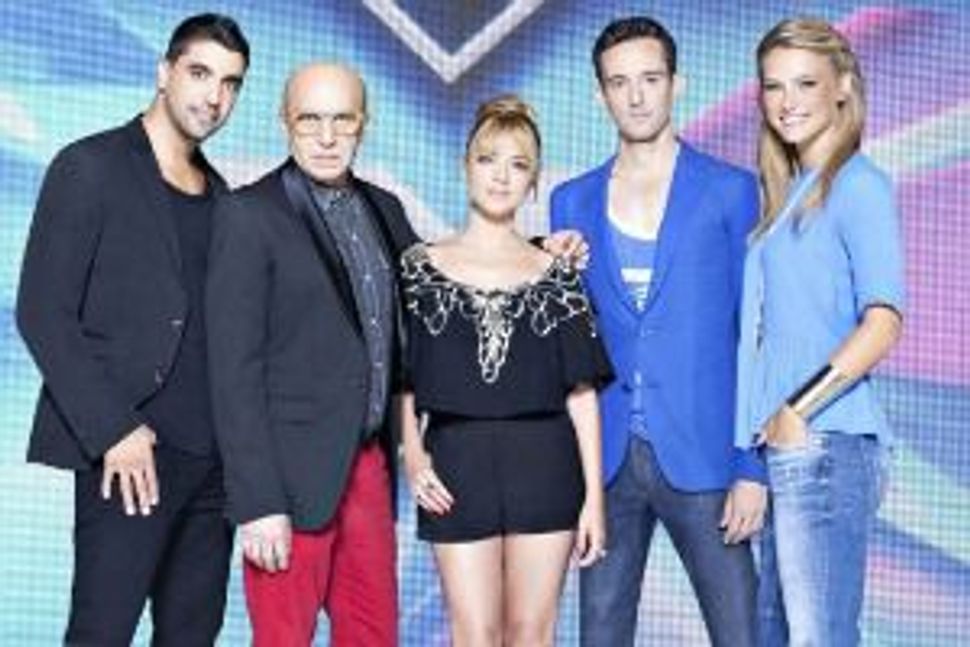 Israeli X-Factor judges with Bar Refaeli (on the right). Image by Haaretz

By now, we expect reality singing talent programs to be emotionally manipulative. It’s all part and parcel of the ratings game, and has been from the very first episode of American Idol, the show that spawned the genre. Without these narratives, after all, how else could so many people be convinced to watch performance after performance of mostly mediocre singers?

But sometimes – in spite of ourselves and our awareness of the corporate marketing machine behind the tear-jerking personal stories of the starry-eyed hopefuls – we are moved. Come on, who couldn’t help feeling great when they saw dumpy middle-aged Susan Boyle blowing away the judges back in 2009 with her rendition of “I Dreamed a Dream” in the YouTube moment that will live forever?

And so it happened again on Saturday night, as the endlessly-hyped Israeli version of the Simon Cowell cash cow “The X-Factor” made its debut. Was it pure coincidence that over the week leading up to its premiere, Cowell both helped raise $20 million for Israeli soldiers and said he was considering learning to dance the hora? Hmmm…

Anyway, the first audition show shot at massive Nokia Stadium was all the franchise is meant to be: big flashy, exciting, star-studded, with the biggest gem in the crown being show host Bar Rafaeli, arguably Israel’s most successful export.

The fare wasn’t anything new or original. We’ve all – even here in Israel – seen it before on American Idol, The Voice and now on the new original Israeli format Rising Star, coming soon to Europe and for which there may be a bidding war in Hollywood even as we speak.

There are so many shows at this point that it’s getting fairly hard to remember which is which.

But some individual performers stand out. On Sunday, it was young Daniel Amit’s audition that stole the show, not necessarily in terms of vocal power, but emotional power. The smiling curly-haired brown-eyed 16 year old stepped onto the stage wearing a T-shirt saying “I am Proudly Autistic.”