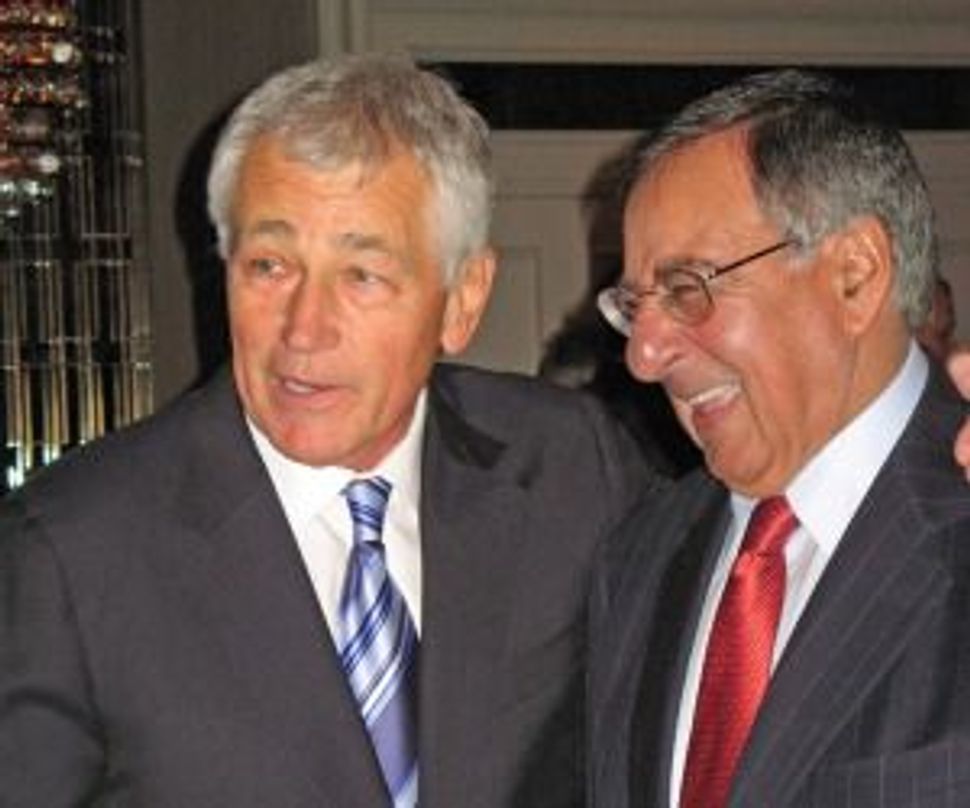 “I think it appropriate for the 100th celebration to honor Leon Panetta,” said Hagel. “His career has embodied the ADL”s continued fight for justice, equality and security.” Hagel recalled taking his young son to Yad Vashem. “I wanted him to see the harsher realities of the depths of evil and the beautiful tribute to the victims of the past. Like all great memorials, it is a warning to never again stand idly by in the face of hatred and bigotry.” Invoking Rabbi Hillel’s injunction, Hagel articulated: “‘if I am only for myself, what am I? …If not now — when?’ As Leon Panetta often says: ‘Our future is not guaranteed. We have to fight for it.’”

“I have always been proud of…having the good sense of timing of when to get the hell out of Washington,” Panetta led off his acceptance speech. “I have never in my fifty years of public service seen so many people dedicated to screwing things up.”

Continuing in a lighthearted mode, Panetta told of the “three missionaries — British, French, Italian —captured by cannibals. Given the option by the chief that they could either take their own lives or jump into the pot of boiling water — either way, said the chief, ‘your skins will be used for our canoes.’” Panetta paused, smiled: “The British missionary plunged a knife into his heart and proclaimed, ‘God Save the Queen!’ The Frenchman slit his wrists and shouted, ‘Vive la France!’ The Italian took out his stiletto and started punching himself in the chest and stomach. ‘What are you doing!’ exclaimed the chief. The Italian replied: ‘I am trying to screw up your canoe’— and there are a lot of people trying to screw up the canoe right now in Washington.”

Reflecting on his family’s immigrant history, Panetta touted the American dream. He told that among his early memories was washing glasses in his parents’ restaurant “because they believed child labor was a requirement.” With gravitas he stated: “I believe deeply in our obligation to maintain close ties with Israel so we could confront our common enemies together… Over the course of time, we did everything we could that would insure Israel would have the wherewithal to provide for its safety. We have no better ally in the world than Israel.”