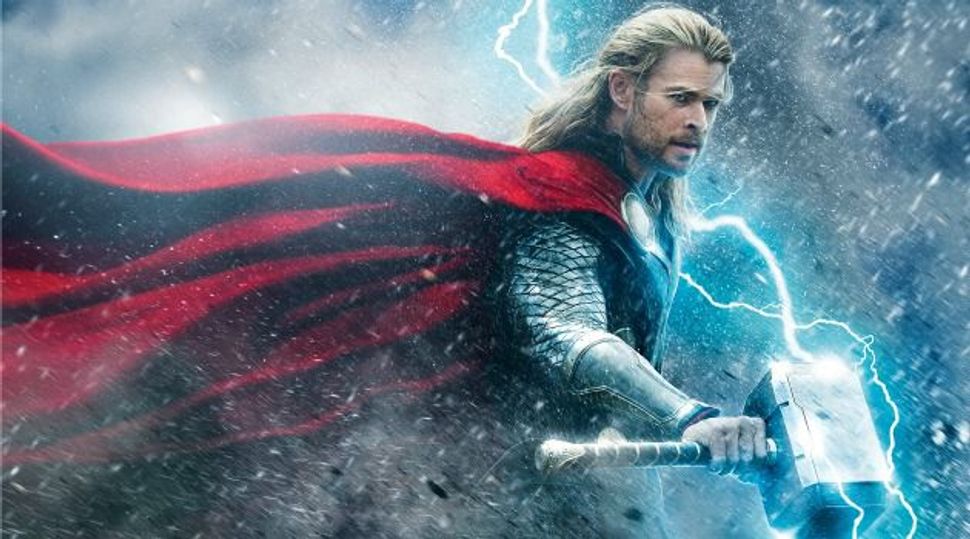 Wanna see ‘Bad Grandpa’ or ‘Thor’ — and daven at the same time?

There is just one problem: the theater is a synagogue — and quite a famous one at that.

“They came to the door wanting to know if the 3:05 showing was on schedule,” said Mark Heutlinger, the administrator of Congregation Emanu-El, the shul named in the listing. “And the answer was, excuse me, you can’t believe everything you read in the New York Times.”

Upon hearing that the synagogue was supposedly showing “Bad Grandpa,” Heutlinger was incredulous. “Really, ‘Bad Grandpa?’ That’s one of our favorite Shabbos films,” he joked.

Emanu-El was New York City’s first Reform congregation and owns one of the largest synagogue buildings in the world. While it occasionally holds private screenings of Jewish-themed movies, the synagogue has no plans to show “Thor: The Dark World.”

In a case of a synagogue mistaken for a cineplex, Congregation Emanu-El now appears as a movie theater in a variety of showtimes listings, including movietickets.com, showtimes.com, and even the New York Times “Movies” website.

But Emanu-El is not showing movies. “It’s not a theater, it’s a synagogue,” said Prince Davis, an administrative assistant in the synagogue office, who was mystified as to how the glitch occurred. “It’s a mistake.”

Calls about movie times began rolling into the synagogue office over the weekend. Since then, a few moviegoers have actually come to the synagogue hoping to see a movie.

Heutlinger and Davis are frustrated by the volume of calls about movie times. “We even have temple members calling and saying, ‘Are you showing a movie or something,’” Davis said. “Do not call Temple Emanuel to see ‘Dances with Wolves’ part two.”

The administrators do not know how to fix the problem, though they are trying to contact the offending websites. Heutlinger assumes the mistake was caused by “lack of attention to detail” by one of the website operators. “

“It also could be somebody’s sense of humor,” he said. “Who knows?”