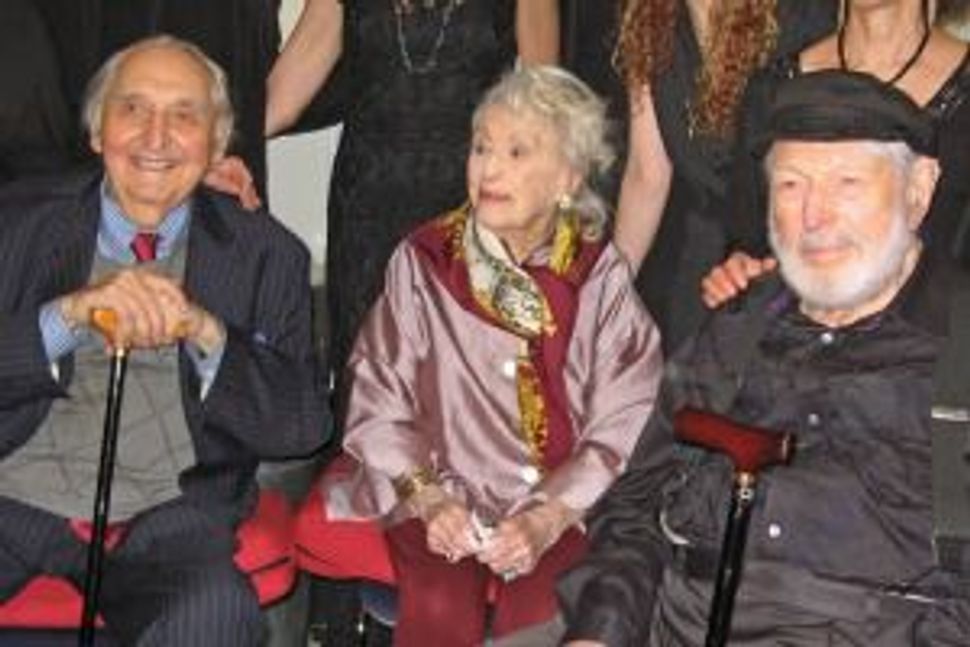 The stars illuminating Symphony Space’s Peter Jay Sharp Theater at the December 2 “Miracle of Miracles” Hanukkah Gala were “Sunshine Boys” (almost 90) Theodore Bikel, (91 year young) Fyvush Finkel and (102 year sharp-as-a-tac stunner) Bel Kaufman. Honoree Bikel — who has portrayed Tevye more than 2500 times worldwide — witnessed the arrival of Hitler in Vienna and escaped to Palestine. It was noted, “When the Jews of Russia needed advocates, Bikel was the prominent vociferous voice performing their songs of defiance.”

Bikel, with irrepressible Emmy Award winner Finkel, performed a scene from “Fiddler on the Roof,” the Sheldon Harnick-Jerry Bock blockbuster musical which is about to celebrate its 50th anniversary.

Looking like a fashion plate in a pale silk lilac jacket over maroon silk pants with a Hermes scarf around her shoulders, ad-libbing Kaufman introduced herself to the sold out audience as the “granddaughter of Sholem Aleichem,” creator of the character Tevye. When the thunderous applause subsided, she joshed, “You greeted me before I said a single word…. Bikel is our personal, private Tevye. But, there was a real Tevye, a small, slight man. He had no daughters.” There was a murmur in the audience. Author of the blockbuster “Up The Down Staircase,” which was made into an award-winning film, Kaufman concluded, “I am truly happy to be standing here in front of you. I love you Theo.” 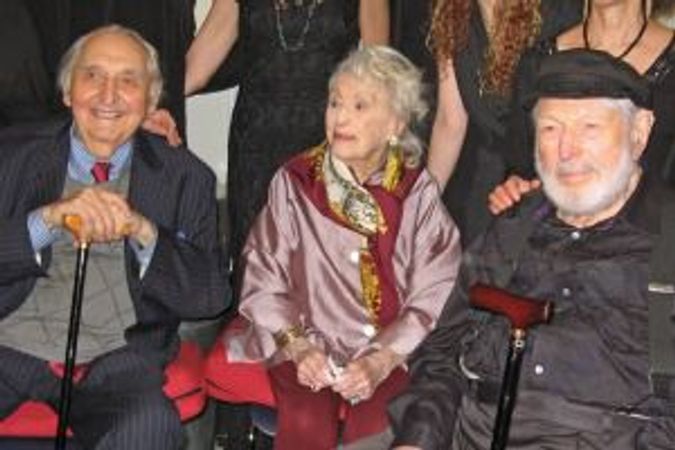 “Never in my life did I have a love declaration from a woman who is 102 year old,” said a beaming Bikel. “I love music. I love Yiddish. It keeps me young.” Yiddish-lover and Academy Award nominee (for “The Defiant Ones” starring Tony Curtis and “Sidney Poitier”) Bikel can boast an acting portfolio that includes a fake Hungarian count in the classic film “My Fair Lady,” a Russian submarine captain in “The Russians are Coming! The Russians are Coming!” and an adoptive father of a Klingon in the TV series “ Star Trek: Next Generation.” The audience was on a high.

Produced by the National Yiddish Theatre-Folksbiene, the event was conceived by Folksbiene director Zalmen Mlotek. The evening offered a lineup of talent that included Elmore James — who, it was noted, was inspired by Paul Robeson — in a beautifully articulated Yiddish singing “Vi Azoy Trink der Kayzer Tey” (Here’s how the Tsar drinks tea); Greek-Israeli singer and bouzouki virtuoso Avram Pangas offered Sephardic Hanukkah medley; multiple-threat cantor Magda Fishman — voice, trumpet, drum and more —bringing a bit of Woodstock to the event, getting the audience to join in singing a wall-vibrating “This Little Light of Mine — Let It Shine!”

Following the curtain calls, a crush of photographers, well-wishers, fans jammed backstage as the trio—elated and exhausted—bravely posed for photo-ops and smiled, smiled, smiled.

Isaiah Sheffer, founder of Symphony Space, who died last year, must have been kvelling — wherever he may be producing another extravaganza.