How Jennifer’s Bat Mitzvah T-Shirt Ended up in Africa 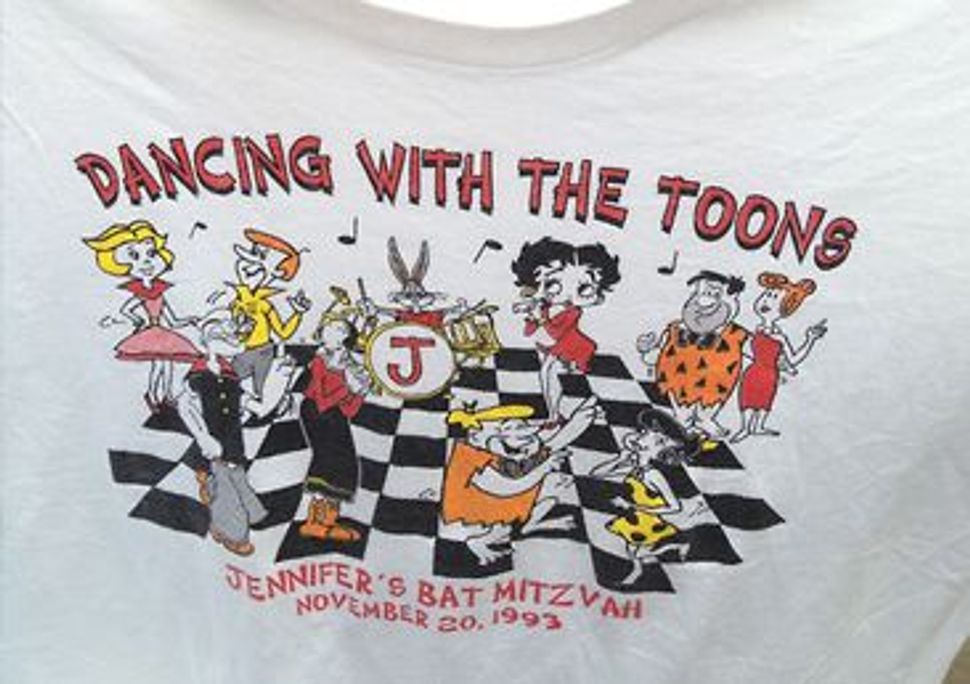 (JTA) — While reporting on the phenomenon of T-shirts originating in the U.S. and winding up in Africa, NPR Planet Money recently turned up a Bat Mitzvah T-Shirt in Nairobi and asked for help tracking down the owner.

What we Know: Jennifer’s Bat Mitzvah was on November 20, 1993. The theme may have been cartoons. And there’s a nametag in the shirt labeled Rachel Williams.

After some Facebook sleuthing — and pinging the wrong Rachel Williams a couple of times — I finally got in touch with Rachel Aaronson, who led me to Jennifer. Interviews with both below.

RACHEL: It is my shirt! Williams is my maiden name. The bat mitzvah girl is Jennifer Slaim, she is married now. That picture is crazy! (Brief Jewish geography interlude)

Can you give me your best guess as to how this shirt wound up in Africa? Do you remember ever donating it? (Or travelling to Africa and forgetting it?)

My mom donated it and a bunch of clothes to Purple Heart. She thinks it might have been five years ago. I had a huge collection of bar and bat mitzvah shirts and wonder if lots of them ended up there!

Wow, that was nice of your mom. How’d you score an invite to the now-internationally-renowned “Jennifer’s Bat Mitzvah”? (i.e. How did you know Jennifer growing up?)

She lived in my neighborhood, we went to school and Hebrew school together. It was one of the earlier bat mitzvah parties for my grade. She really liked Betty Boop.

Don’t we all. Do you generally hang on to random Jewish artifacts like this (e.g. Old Bar/Bat Mitzvah T-shirts)? Or are you more of a no-clutter person?

I kept all the shirts and some of the giveaways for a long time. I also made a scrapbook with all of invitations that I think is still in my parents’ house. I try to be a no clutter person generally!

Three thoughts. First, I’m glad the shirt is getting used instead of sitting in a drawer or landfill. Second, I feel a bit guilty that some people have so little that they might end up wearing a silly shirt from my childhood. And third, I’m impressed that the name tag my mom ironed on for overnight camp has lasted this long!

Thanks for your time, Rachel. Last chance for shout-out to that summer camp that presumably forced your family to label your clothes and brought everything full circle today…

Tamarack! It was the best and they are on Facebook. In Michigan.

Moments later, I spoke over the phone with Jennifer Rasansky, who inspired the bat mitzvah T-shirt seen round the world.

What was your reaction to seeing this photo of your Bat Mitzvah shirt in Africa?

JEN: It was kind of insane to be honest. I just couldn’t stop laughing. It’s amazing how big the world is and how small it is at the same time.

How do you know Rachel?

We grew up together in Metro-Detroit.

Tell me more about your bat mitzvah party:

My theme was cartoon characters. I was really into Betty Boop. At the time, we all did different themes. It brings back really fun memories. I’m kind of in shock that that picture found me, and how you found me & Rachel. Oh, my husband’s on speaker phone.

MICHAEL: I gave out boxer shorts at my bar mitzvah party. It was at a comedy club.

What did they say on them?

‘I laughed my tush off at Michael’s Bar Mitzvah.’

I don’t suppose you donated those…

I’d have to ask my mom what we did with them. It was 1993… I don’t think you usually donate underwear.

How’d you meet each other?

MICHAEL: We grew up one town over from one another.

JEN: We went to the same bar/bat mitzvahs and didn’t know each other; two different school systems.

Are you nostalgic for the nineties?

JEN: A lot of people in our generation are — early nineties, not mid-nineties.

Who were your favorite cultural icons of the 90′s

JEN: It was a fun theme, we thought it’d be a fun thing to do.

MICHAEL: We know that a lot of bar/bat mitzvah T-shirts get to downtown Detroit in the inner city.

Had you known about this phenomenon, of American shirts winding up in Africa?

MICHAEL: I haven’t read the NPR story yet, but when I see news photos about Africa, I’ve seen people wearing Chicago Bulls jerseys; I’m sure there’s not an NBA store in Botswana.

Back to the bar mitzvah shirts in downtown Detroit — are those donated directly by the community?

MICHAEL: We donate our clothes to Salvation Army, Purple Heart, and from there it gets dispersed to wherever its needed. Some synagogues have clothing drives, but people usually bring mittens and coats, not T-shirts.

JEN: In high school, [our friends] did a purge and got rid of all of our bar and bat mitzvah shirts and donated them. It’s just really funny that someone took that picture, and that mine happened to be one of them.

How does it feel to see your donated shirt in Africa? Does this affect how you plan on giving to charities in the future?

JEN: We’re really good about cleaning out our closets and giving, both of us have already donated our clothes, we never throw out any of our old clothing. It’s nice to see it’s paying off and goes across the world. I don’t wanna say I’m in shock, but I can’t believe it. It was just the 20th anniversary of our bar and bat mitzvah.

MICHAEL: Another amazing thing is that [the bat mitzvah T-shirt] looks to be in such good condition, too. Seems like it was just passed around a lot.

I searched your name in Google and found a video of your daughter wearing parachute pants and dancing to MC Hammer. Can I post it?

JEN AND MICHAEL: Sure

How Jennifer’s Bat Mitzvah T-Shirt Ended up in Africa