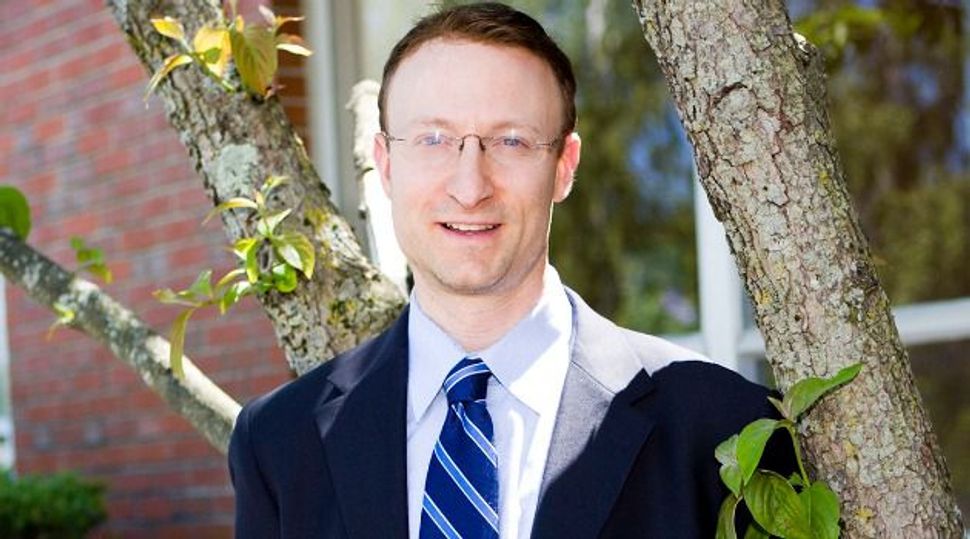 Oil Boom: Gregory Zuckerman, author of ?The Frackers,? explores the history of fracking, the Jewish players in the industry and how Israel and the United States are shifting away from oil dependency. Image by Josh Kuchinsky

Gregory Zuckerman, Wall Street Journal reporter and author of “The Greatest Trade Ever: The Behind-the-Scenes Story of How John Paulson Defied Wall Street and Made Financial History,” has just finished a new book. “The Frackers: The Outrageous Inside Story of the New Billionaire Wildcatters,” tells the story of the oilmen who led the charge in the recent American revolution in natural gas and oil extraction.

Since 2010, partly due to fracking, US oil production has increased, pushing America to surpass Saudi Arabia and Russia as the world’s largest energy producer. This eruption in extraction has U.S. dependence on foreign oil at a 20-year low and declining.

Former Forward intern Doni Bloomfield, who served as a research assistant on the book, spoke to Zuckerman about the surprising role Jews played in the surge, and what decreasing American reliance on Middle Eastern fuels may mean for Israel and beyond.

Doni Bloomfield: As someone who is not an energy reporter, what pushed you into this story?

Gregory Zuckerman: I’m a business writer first and a Wall Street-focused reporter second, but it was obvious to me when I started this that the most important issue in the business world today is taking place in the world’s energy fields. One needs to go away from the coasts, both the East Coast and the West Coast, to really find where the jobs are being created, where geopolitics is being impacted, where Americans are really taking remarkable risks: both business and, potentially, environmental risks.

What is fracking and why does it matter?

Fracking is just the act of breaking apart or fracturing rock far down below the earth — rock that’s packed with oil and gas. This rock is very tough, it’s very “tight” as they call it. And the way that these fractures are created, so that oil and gas can be set free, is by pumping large amounts of water and chemicals and sand into that rock. What’s unique since around 2000 is we’re fracking and drilling in a kind of rock called shale that has historically been too tight, too compact, to give up much oil and gas. Lately we’ve been able to get a lot of oil and gas from this very challenging rock which even the experts gave up [on] long ago.

I know from the book that Americans from every walk of life had a hand in this surge of energy production. What role have you seen people from a Jewish background playing in the early stages of this fracking revolution?

I was struck and surprised by the impact of various Jews on energy in general, on the evolution of the industry. George Mitchell, the father or grandfather of modern-day drilling and fracking, got his early boost by courting local Jewish investors in the Houston and Galveston area. I interviewed Mr. Mitchell before his recent death and he regaled me with stories of how — and this is something only a 90-something-year-old entrepreneur from Texas can maybe get away with — stories of how the Jews were both good backers and investors and supporters but also gave him a really hard time when he couldn’t find any oil and gas, but he had fond memories of going back and forth with his various Jewish backers, and frankly they kept him going when things were tough, when he was getting his start and even afterwards.

One of the more fascinating people who stood out for me in the book was Sanford Dvorin, who tried to look for gas in the city of Dallas. What was his role in this story?

Sanford Dvorin is someone I just stumbled upon. He’s a fascinating guy who left Newark, N.J., the Jewish son of a butcher who decides to head west to make his own fortune. He was one of the guys who was very early in believing that there could be a lot of gas that could be extracted from this shale rock in Texas, and all the experts told him he was nuts. He proceeded to bet his life savings [on drilling] in an urban area which is even more preposterous, according to the experts, both for logistics reasons and because someone else would have found it a long time ago. And he went out there, he served bagels and whitefish salad to his workers, his roughnecks in the field, he was on the cusp of something great. In my eyes he was a pioneer and gets credit in his own right because some of the same acreage, fields and wells that he bet his life savings on were worth hundreds of millions of dollars for others.

This isn’t entirely a new thing. Jews have been involved in the energy industry from the beginning.

That’s exactly the case. Everything from the Rothschilds’ financing the birth of the entire Russian oil industry, to people like Leon Hess and Armand Hammer who were early in Middle Eastern fields. And even the company Shell was started by children of a [Jewish] trader, [who] made his early fortune buying shells from British sailors.

Fast forwarding, one of the most important and vexing questions is how this surge of oil and gas production in the United States is going to affect geopolitics, and in particular Israel and the Middle East.

Right, and I think Israel is going to see some of this with their own discovery of natural gas off their coast, so natural gas itself is seeing a boom both in fracking and beyond.

Growing up it was drilled into us — no pun intended — how our country is constrained when it comes to energy and we rely on others and these others aren’t people we really want to depend on. Just like America has turned around and shifted on a dime from where we were dependent and worried about the future and is now moving towards exporting gas, shockingly, Israel too is in those same shoes where just a few years ago it wasn’t clear where it was going to satisfy its energy needs and now they too are talking about exporting.