How ‘A Gentleman’s Guide’ Got to Broadway 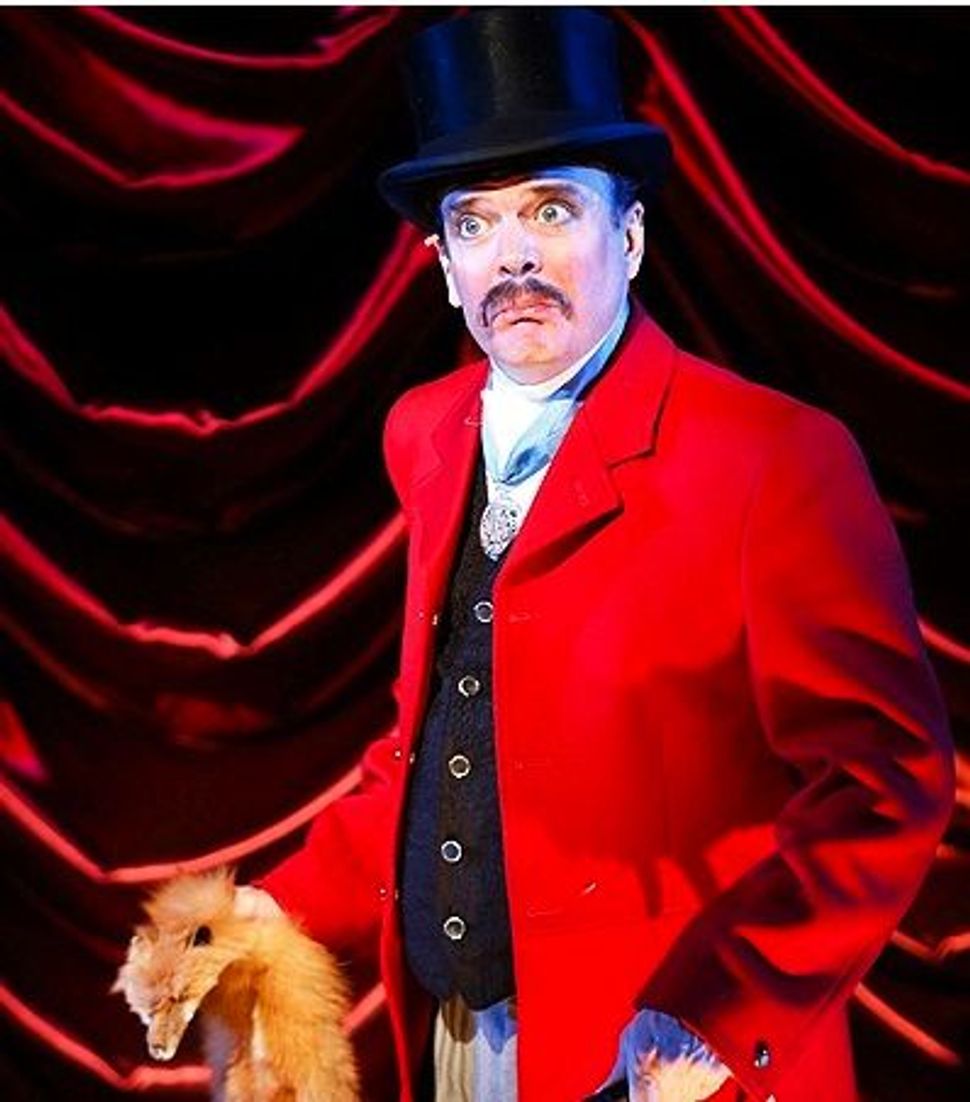 Jefferson Mays in ?A Gentleman?s Guide to Love and Murder.?

“A Gentleman’s Guide to Love and Murder” is easily the best reviewed musical of the season. It marks the Broadway debut of Robert L. Freedman (book and lyrics) and Steven Lutvak (music and lyrics), who were praised by The New York Times for a score that “establishes itself as one of the most accomplished (and probably the most literate) to be heard on Broadway in the past dozen years or so.”

The play is based on a 1907 novel by Brit Roy Horniman that was turned into a 1949 film, “Kind Hearts and Coronets,” starring Alec Guinness.

It’s a simple tale. Poor Monty Navarro (Bryce Pinkham) is visited by a friend of his late mother, who informs him that he is related to the Earl of Highhurst. It seems his mom was banished when she married Monty’s dad, a Castillian. Now Monty is just eight (soon to be dead) relatives away from an earldom.

Freedman (from Los Angeles) and Lutvak (in New York) spoke to the Forward about the long road from concept to Broadway, the plot’s Jewish antecedents, and creating underdog characters.

Curt Schleier: How did this project begin?

Freedman: Steve came to me several years ago and said that he always wanted to make a musical out of the story. He turned me onto it and I absolutely loved it. We were both attracted to the genre and the time period. Roy Horniman, who wrote it, was a contemporary of Oscar Wilde.

Lutvak: One of the things I love in the story is that culturally there was such a strict code of ethics at the time. The ideas that a lead character would be a murderer and a gentleman at the same time opened up enormous comedic and musical possibilities. The idea of keeping the musical formula going while he was killing all these people seemed like too much fun to pass up. The musical palate could borrow from classical music, Gilbert and Sullivan, and Noel Coward of whom I am a fan.

Freedman: One of the biggest challenges was how do you make a murderer sympathetic? That was an exciting challenge for us. But in our show you do care about him and root for him. He’s the underdog, a man who was tricked out of his birthright, denied not just money and position, but the love of the woman he loves, who won’t marry him because of his lower position in society.

Lutvak: The story of the outside and trying to succeed is as old as the hills. We are turning that story on its ears — an outsider who reaches his dream but does it by murdering people. We get to have our cake and eat it too; we’re traditional but subversive at the same time.

There’s something very interesting most people don’t know about the original novel, isn’t there?

Lutvak: The novel the show is based on is titled “Israel Rank: The Autobiography of a Criminal.” What’s interesting about the novel, which was written in 1907, Israel Rank is half Jewish and that puts him in an awkward place in society. Because his mother married a Jew, he was disinherited. In the 1949 movie, they changed his heritage from Jewish to Italian. They felt making even a half Jew a murder so close to the end of World War II would somehow be perceived as anti-Semitic.

You didn’t make him Jewish, either.

Freedman: We weren’t afraid of accusations of anti-Semitism.

Lutvak: It was his otherness we were interested in. We thought Castilian was funnier.

It took you, what, 10 years to bring this to Broadway? Why did it take so long?

Lutvak: We had a major producer who was excited to get on board. We were scheduled to have a meeting with him on a Monday but a few days before that he died.

Freedman: We were sad that he died, of course. But at that point it was almost comically absurd that we would have of piece of bad luck like that. There were also legal issues we hadn’t expected to encounter.

Lutvak: There was a righteous dispute with the film company that owns the movie based on the same underlying material.

Freedman: We were all set to go at La Jolla [Playhouse] and they sued us. It took over a year, and in the end the judge dismissed the case. But by that time we lost the theater, we lost the producer and had to start all over again.

Lutvak: But we did overcome all that, and here we are on Broadway.

Can you talk a little about your Jewish backgrounds?

Freedman: I was born and raised in Los Angeles. I was always in synagogue. I was very involved with United Synagogue Youth, and was president of the Pacific Coast Far West region.

Lutvak: I’m a native of the Bronx and was raised in Little Neck, Queens. I started playing piano when I was 5. I just kind of understood it. I officially started lessons when I was 6 and almost immediately began writing music. By the time I graduated high school, I’d written 350 songs; unfortunately none of them were published. Like Robert I was bar mitzvahed. We were kosher in the house and my folks spoke Yiddish at home. My father spoke only Yiddish until he was six.

Is there anything you bring from that background to your current work?

Lutvak: In a certain way, it’s impossible to write in the minor key without this music seeming Jewish.

Freedman: As musical theater riders and as students and appreciators of musical theater, it’s undeniable that we are greatly influenced by book writers and composers from throughout the last century, a great many of them were Jewish. Our work has the inherent influence of all those wonderful Jewish writers who came before us.

How ‘A Gentleman’s Guide’ Got to Broadway