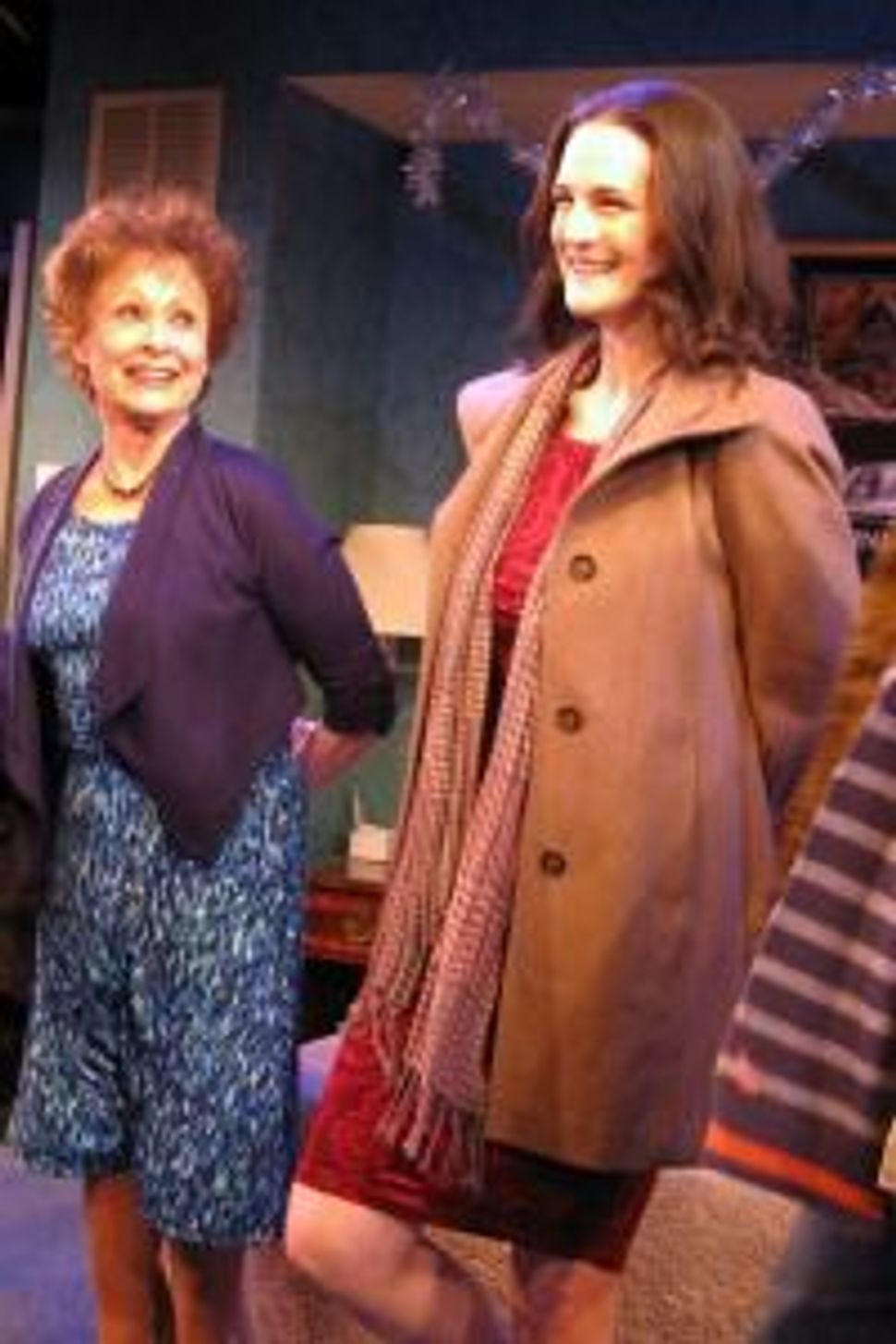 Celebrate 2014 by going to see “Handle With Care” at the Westside Theatre Downstairs and relish a delicious, funny play that raises the concept of farklempt to new heights.

There’s stunning, statuesque Charlotte Cohn as Hebrew spouting Ayalet whose “Safta’s” (grandmother’s) coffin has vanished in the wilds of Virginia. The hilarious provincial van driver Terrence (Sheffield Chastain) is at a loss about what happened to the corpse. He calls on his [half] Jewish friend, Josh (Jonathan Sale) who he assumes understands Ayalet’s rat-at-tat Hebrew because he’d had — what he refers to — as his “Hare Krishna” (Bar Mitzvah) celebration. No luck.

Not until a flashback setting in Act II do we meet the missing Safta, Edna — portrayed by the still gorgeous Carol Lawrence —the original Maria in Jerome Robbins’ Broadway “West Side Story.” A Holocaust survivor, Safta Lawrence — on a visceral search to find someone — gets the accent, the mannerisms and the essence of her war-ravaged character down pat.

Amidst double entendres and cross-cultural faux pas, Ayalet and Josh slowly diminish the linguistic gulf with — among others — a reference to “Fiddler on the Roof” here and a grasp about the meaning of Shabbat there… Was their encounter in a Virginia hotel a random accident, a coincidence-or a bashert destiny? Directed by Karen Carpenter, the poignant yet laughter-eliciting play’s unpredictable ending elicited a communal “Ahhh! from the opening night audience.

During my post-performance chat with Copenhagen-born Charlotte Cohn — whose husband Jason Odell Williams wrote the play — she told me: “My father was a Danish Jew…[He] returned after the war and their house was untouched…. I came to Israel at five. I joined the military…served five years — longer than the required two years —  and was on a trajectory to be a military lifer—a tank commander, an officer. One day I woke up and said, ‘I want to be an artist!’ I fell in love with acting …[yet] never acted in Israel.”

“I was Orthodox in Israel…did not want to be B’nei Akiba, Modern Orthodox. No driving on Shabbat, no TV. My mother was a Sabra—but not religious — grew up in Dgania Beth, near the Sea of Galilee. My separation was at sixteen. I still respect my mother and father and have kept intact what they taught me. My family is proud of me.” She paused. “Later my mother became secular. My father got more and more religious as he got older…They divorced. But I have great respect for tradition.”

When I asked why there were there no supertitles for her Hebrew monologue and give-and-take with other cast members, Cohn explained: “ It’s because—like my husband—we wanted the audience to experience [the events] just like [the character] Josh in the play.” Among the handful in the audience who needed no translation was Hebrew-fluent [and former Haganah sniper] Dr. Ruth Westheimer — sitting next to kvelling producer Douglas Denoff who joined in a standing ovation.