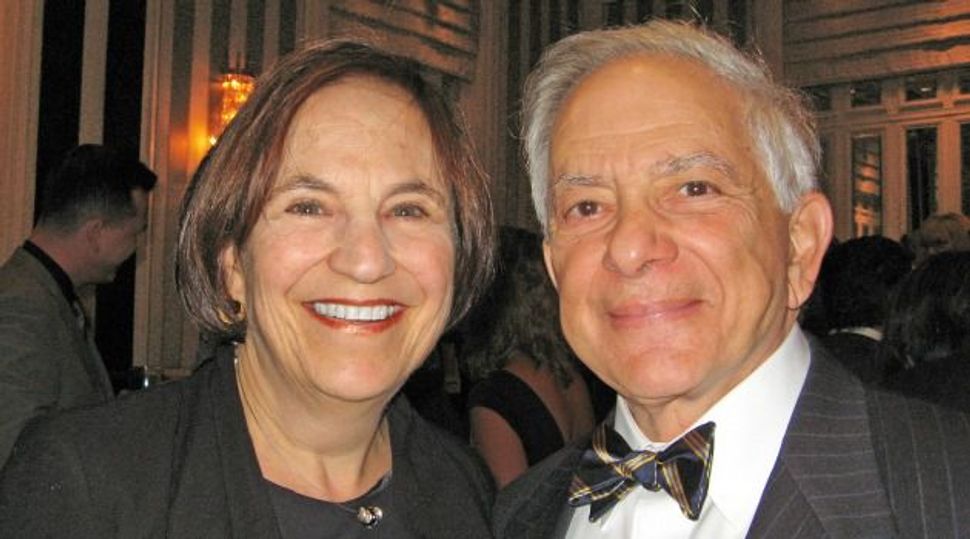 “We love the Forward!” Marian Scheuer Sofaer and Abraham Sofaer exclaimed in tandem when I was introduced to the husband-wife honorees at the American Numismatic Society’s 2014 Gala at the Waldorf-Astoria.

During our reception chat, the Sofaers confided, “Our favorite column is ‘Philologos.’ We’ve been Forward readers since we knew [about the paper]…. But, let’s talk later when we get back home [to California].”

The dinner notes informed: “Abe realized that coinage provided a unique opportunity to explore the rich cultural history of the Holy Land. Their collection includes coins from the early Persian period of the fourth century BC through the Macedonian, Seleucid, Ptolemaic, Roman, Byzantine, Jewish and Arab States to the Crusaders of the 13th century — a period of 1700 years…. Coins as manifestations of political and economic policy as well as religious and dynastic ideology which open a unique window on the past and present.”

Mrs. Sofaer, a Bryn Mawr College and Columbia law School graduate, boasts credentials that include New York City Asst. Corporation Counsel in the Affirmative Litigation Bureau from 1982-1985. She later represented families whose property in former East Germany had been confiscated by the Nazis and also co-produced the award-winning documentary “Poumy,” about an Alsatian-Jewish woman’s role in the French Resistance during World War II.

Mr. Sofaer — a Yeshiva University and NYU School of Law graduate —  is the George P. Schultz Distinguished Scholar and Senior Fellow at the Hoover Institution, whose work focuses on the power over war within the U.S. government and on issues related to international law, terrorism, diplomacy and national security. His most recent book is “Taking on Iran: Strength, Diplomacy, and the Iranian Threat.” An irrepressible spirit, during dinner, backed up by the band, Mr. Sofaer took the microphone to sing the lyrics to “I’ve Got You Under My Skin.”

He recalled his meeting with David Hendin, coin curator of a coin collection of New York’s Jewish Museum…”being introduced to Yaacov Meshurer, chief of Archeology and Numismatics at Israel Museum who taught me about coins and the history of the Holy Land…. and so I started collecting.” His first purchase was a shekel of the first year of the Jewish Revolt against Rome in 66/67 CE.

As benefactors of the American Numismatic Society, the Sofaers have donated part of their Holy Land collection — some 5000 coins — as a lasting legacy in the United States and in Israel with access scholars from both countries to study and publish. In 2013 The ANS published the two-volume catalogue “Coins of the Holy Land.”

When I asked Mr. Sofaer when his unlimited energy and joie-de-vivre, he replied: “I exercise. I walk every day. We have a gym in the basement, I married a young woman.”