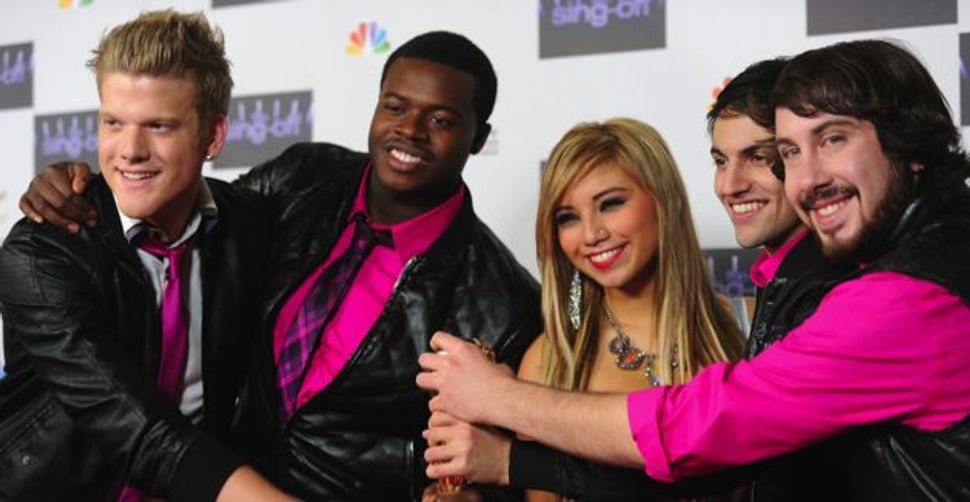 Listen to Pentatonix, and you’ll be sure that you hear instruments. In fact, it is an a cappella quintet of young singers — four men and one woman — who perform without any accompaniment, and manage to make a remarkable range of sounds in musical styles ranging from pop to electronica to R&B and dubstep.

Pentatonix emerged just over two years ago, when they won the third season of the a cappella reality show “The Sing Off.” They’ve put out three albums thus far and, with 4.5 million YouTube subscribers, are hugely popular. Pentatonix’s super-fun medley of Daft Punk songs has close to 47 million views on YouTube, and their cover of Lorde’s “Royals” more than 23 million. Pentatonix also sings original songs, like the delicate, powerful “Run to You.”

Avi Kaplan, 24, is Pentatonix’s baritone or “vocal bass.” Kaplan has been making music with a cappella groups since high school and was majoring in opera, as well as winning prizes as part of a vocal jazz ensemble, at a California college when he was invited to join the nascent Pentatonix right before “The Sing Off” auditions. He also plays guitar and arranges choral and a cappella music. Kaplan spoke with The Arty Semite from Texas, where the group was getting ready for a college performance, in a warm up to their 28-date sold-out North American concert tour, which began February 5 in Tulsa and will lead into a European tour.

Debra Nussbaum Cohen: Why do you think a cappella music is so popular?

Avi Kaplan: There has been a lot of exposure with (the movie) “Pitch Perfect,” “The Sing Off,” with “Glee,” people know about all these shows. I hope we’re helping it somehow. There has been so much fake music recently, so much electronic stuff and Auto-Tune. We love that kind of music but it comes to a point where you go on the radio and ask, “Is that person actually a good singer?” You never know anymore. Literally anyone can sound good now. I really do miss when you listen to somebody and know that they’re awesome. People love hearing something that’s new and real and natural, which is another reason people are gravitating to it.

Tell me about your Jewish background and education.

My family would go to temple; my parents always wanted me to understand my Jewish roots. Growing up in Visalia, California, there weren’t many Jewish people. I identify with my family being Jewish but growing up, it seemed like I was the only Jew around, was the token Jew. I was made fun of for being Jewish. One time in high school on the bus a girl was being really mean to me. I asked her why and she said, “Because you killed Jesus.” I said, “I didn’t personally.” …It was still hurtful. It didn’t happen all the time, but enough where I felt it was really annoying.

I’m around way more Jewish people now than I was growing up. Everybody I meet is Jewish now, all the CEOs of companies, managers, agents, producers. Almost our entire team is Jewish. Our tour manager is my sister, our agent, our lawyer, the head of the record label is Jewish.

My Jewish education ended with my bar mitzvah. We didn’t go [to synagogue] super often. I’m still very connected with my Jewish roots and celebrate all the holidays as much as I can. I come home for Hanukkah and Passover and Yom Kippur and all that, I try and stay connected. My dad always said “Be proud that you’re Jewish,” and I keep that dear to my heart.

What are your musical goals?

I just want us to grow our fan base, become a household name, be respected as musicians and who we are as people. We’d love to win Grammys but for me it’s about being able to do what we love and inspire people, and bring positive things to the world through our music.

When people listen to our music I want it to be uplifting, something you can listen to and it just takes you away to another world. It’s totally therapeutic and beautiful. If you listen to things that are giving you the wrong ideas or messages or ideals, it’s not a positive thing.

One of Pentatonix’s three albums is a Christmas album. (Pentatonix’s “Little Drummer Boy” was the first song to knock Mariah Carey out of first place on the Christmas best sellers list in a dozen years). Was it uncomfortable for you to sing Christmas songs?

It didn’t bother me at all. I’ve been singing about Christmas and Jesus, because of all of that in choral music. I love singing Christmas music, no problem at all singing that.

Have you heard any of the Jewish a cappella groups?

I’ve seen The Maccabeats. I’ve wanted to do a collaboration with them for YouTube. I haven’t reached out to them yet, because I’m so busy all the time. But I will.