Britain’s ‘Rainbow Jews’ Look to Past and Future 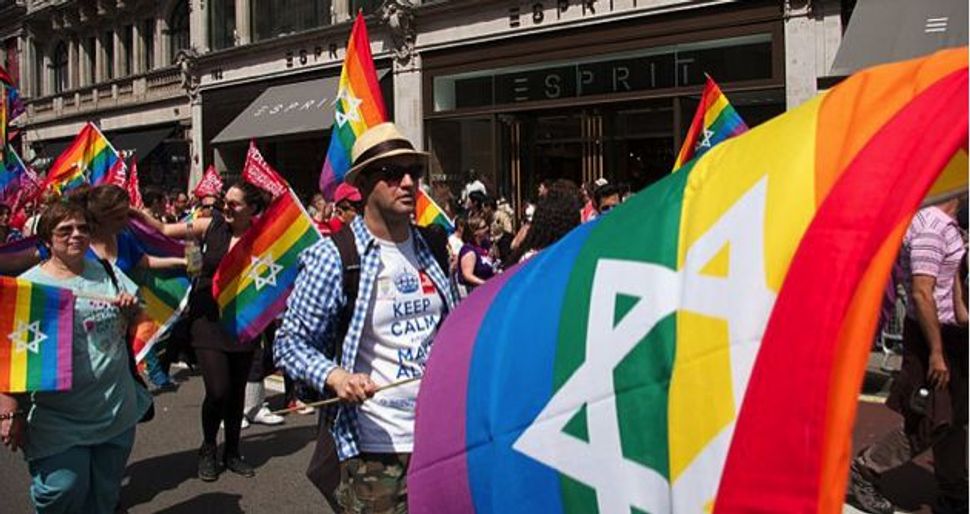 “I see a lot of young Jewish gay people today who are very confident about being out. I see them on Old Compton Street wearing their Star of David like it was just a piece of jewelry. They think it’s fun,” Russell Vandyk says. “But they have to be aware that things weren’t always so easy. The danger is that people get too relaxed and comfortable. Actually, it’s a serious matter and one needs to be on guard, because at any time the wheel could turn.”

Vandyk, who was immersed in the struggles of the 1970s and ‘80s and was a key part of London’s Jewish Gay Group, is one of several individuals who recorded their stories for “Rainbow Jews.” This oral history project, the first of its kind in the United Kingdom, seeks to capture and preserve the testimonies of LGBT British Jews, encompassing the range of experience from the 1950s until the present.

The persons interviewed for the project include Lionel Blue, the first British rabbi to declare his homosexuality publicly, Abi Jay, the only known Jewish intersex person in the U.K., and Sheila Shulman and Elli Tikvah Sarah, the first openly lesbian rabbinical students. “We were putting together what it meant for us to a lesbian, to be a Jew,” Tikvah Sarah says. “We could see strong similarities because in both cases [we had] minority marginal identities.”

Their experiences and their voices form the basis for a new exhibition at the London School of Economics, also named “Rainbow Jews,” staged to coincide with LGBT History Month in the U.K. Tikvah Sarah and Shulman are among those who feature in the two movies that make up part of the exhibit: “Now and Then,” an intergenerational conversation with eight Jewish people sharing stories about LGBT lives in Britain, and “Rainbow Jews: Pioneers and Milestones,” a historical narrative interlaced with taped interviews.

Liberal Judaism — one of the two streams of progressive Judaism in the U.K. — is host to the “Rainbow Jews” project. “We see ourselves as the inheritors of prophetic Judaism, and as such, we view the inclusion of the LGBT people and making heard their voices, including a people who have long been excluded, as part of this,” Rabbi Danny Rich, Chief Executive of Liberal Judaism, told the Forward. “Our communities are not perfect, but it is important we understand one another and celebrate the diversity of the Jewish community.”

Funding for the project comes from the Heritage Lottery Fund (HLF), an organisation which invests around £375 million per year in projects with a lasting impact on people and places. The HLF consider “Rainbow Jews” to be a “great project” and a “great success,” but future funding is considered on a case-by-case basis. In the long term, “Rainbow Jews” is dependent on further philanthropy and support from institutions like the HLF.

For now, the project continues to collect testimonies and to create educational materials, with the formal launch of the archive, associated with the London Metropolitan Archive, yet to come. “This is a travelling exhibition and we wish to take it around the country, for this is supposed to be a British project,” Surat Knan, founder and project manager of “Rainbow Jews,” told the Forward. “We were to inspire more people to learn about our community and about LGBT Jewish history and make this a real nationwide project.”

Come March 29, 2014, same-sex marriage will be legal in the U.K., and Liberal Judaism and some Reform synagogues will be ready to host these unions. The fact that the attitudes of Judaism and the state have evolved to the point where gay Jewish weddings are possible, in contrast with the stories recorded by the “Rainbow Jews” project, is a demonstration of the comfortable position of LGBT Jews within wider British society.

Moreover, it accentuates the division between the LGBT experience in Britain versus other parts of the world. Addressing the launch event, human rights activist Peter Tatchell warned that the situation for LGBT people in Russia today “has echoes of the treatment and vitriol visited against Jewish people in Germany in the late 1920s and early 1930s.”

Asked about what role this archive and the “Rainbow Jews” project can have, Tatchell said, “It is very important that the contribution of Jewish LGBT people, both to the Jewish community and the gay community, is recognized and recorded. So much of this history is undocumented. So many people in both communities are not aware of the valuable contributions LGBT people have made.”

Britain’s ‘Rainbow Jews’ Look to Past and Future