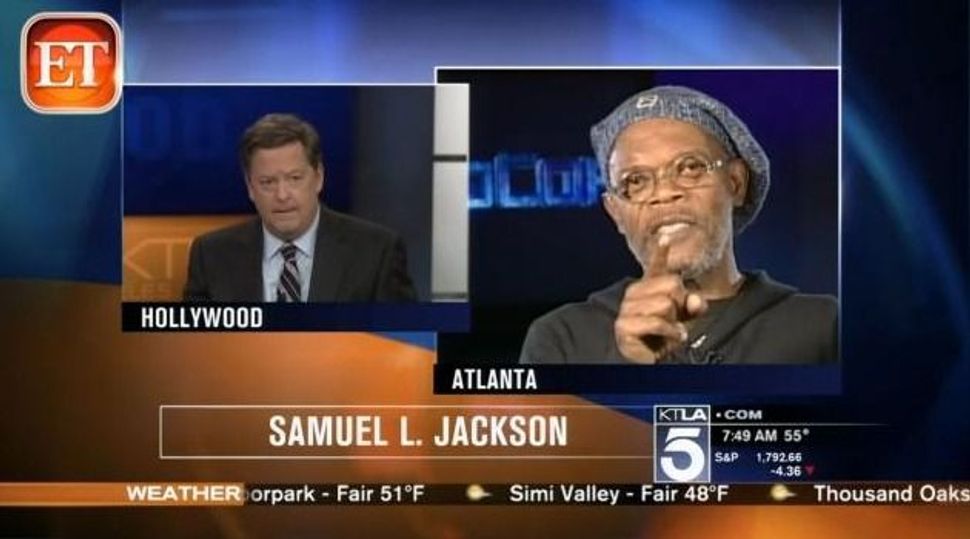 Sam Rubin needs to go back to sensitivity training.

The Jewish KTLA anchor, who once called out Mel Gibson on his anti-Semitic remarks, committed a major faux-pas yesterday when he confused Samuel L. Jackson with Lawrence Fishburne on-air.

It all started with Rubin asking Jackson, who stars in the upcoming “Robocop,” what the reaction to his Super Bowl ad was like, the New York Daily News reported.

“What Super Bowl commercial?” Jackson asked. (For reference, this is the Kia commercial that Lawrence Fishburne — Morpheus from “The Matrix” — starred in.)

Rubin can be seen looking off-camera clearly embarrassed. He awkwardly tried to diffuse the situation, but Jackson would have none of it.

“You’re as crazy as the people on Twitter,” the 65-year-old actor said. “I’m not Laurence Fishburne. We don’t all look alike. We may be all black and famous, but we all don’t look alike. You’re busted.”

“You’re the entertainment reporter for this station?” he asked. “And you don’t know the difference between me and Laurence Fishburne? There must be a very short line for your job.”

Rubin then tried to turn the conversation back to “Robocop.” Nope. Not happening.

Jackson, a spokesman for Capital One, then proceeded to give Rubin a cheat sheet for distinguishing black actors in commercials:

“There’s more than one black guy doing a commercial,” he pointed out. “I’m the ‘What’s in your wallet?’ black guy. Morgan Freeman is the other credit card black guy. You only hear his voice though so you probably won’t confuse him with Laurence Fishburne.”

Though the actor kept a smile on his face during the whole interaction, he was visibly annoyed. Rubin later publicly apologized his the misunderstanding, saying that Jackson’s tirade was “the shellacking I well deserved.”

“I pride myself on the fact — that unlike a lot of people who do this kind of work — more often than not, I really do know what I’m talking about,” he added. “I’m really embarrassed about (what happened), and I very much apologize to Samuel L. Jackson and anyone else who was offended for what was a very amateur mistake.”