What Do Menorahs Have To Do With Madonnas? 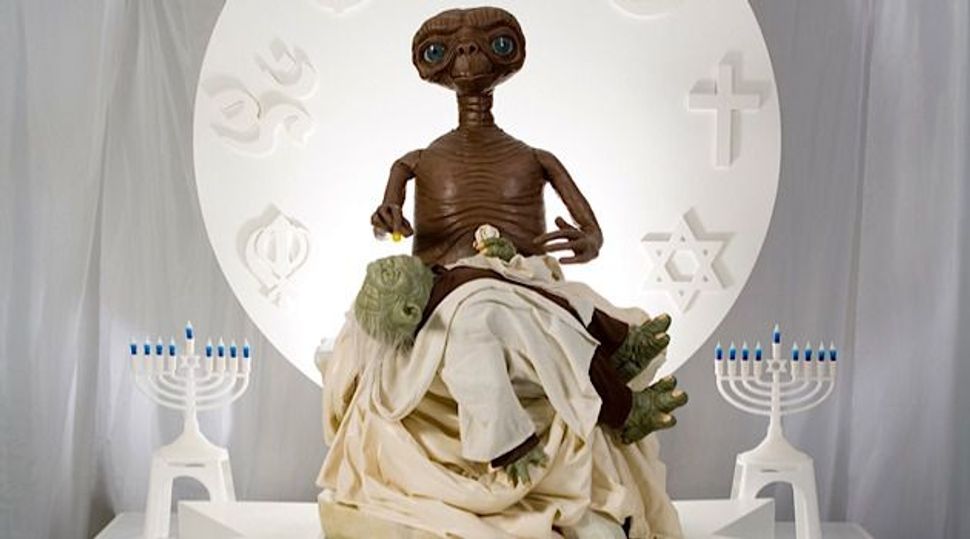 The Pietà, or the Virgin Mary mournfully cradling Christ’s dead body, is an artistic invention, which, as the Encyclopedia Britannica explains, “has no literary source.” One of the most important representations of the Pietà is Michelangelo’s late 15th-century marble sculpture at St. Peter’s Basilica. Michelangelo’s Christ lies on the Virgin’s lap, as limp as the folds in her flowing dress; Mary is not only a particular mother grieving for her dead son, but all mothers who have ever grieved for a child.

Sacred cows, however, are particularly prone to reappropriation and, on occasion, mockery. Denver-based artist Cedric Chambers’ “The Prophets” shows Darth Vader holding the dead Christ over a pile of skeletons in front of the toppled Twin Towers, some parts of which resemble crosses. (It seems that a Huffington Post write-up at one point questioned whether it was “the most offensive painting ever,” although that grandiose claim no longer appears.)

Poland-based Kordian Lewandowski’s “Game Over” maps out the Pietà over game characters, specifically Princess Peach holding a dead Mario. Online searches for Pietà reveal that the pose hasn’t gone mainstream like “Tebowing” or “planking,” but it is often interpreted unexpectedly, such as in this (NSFW) Annina Roescheisen work and this Nicholas de Lacy-Brown painting.

Jennifer Marman and Daniel Borins’ “piETa,” which is on view through April at the Art Gallery of Ontario in Toronto, also playfully interacts with the solemn art historical conventions surrounding the Pietà. The work casts ET (of the 1982 film) as the Madonna, and Yoda, of Star Wars, is the stand-in for Jesus.

The work, which the artists describe as an “intergalactic mandala,” includes a variety of interfaith props: two electric Hanukkah lamps, a Star of David, a cross, a star and crescent, the Dharma wheel, the nine-pointed Bahá’í star, the Sanskrit Om, and the Sikh Khanda.

“The Pietà is one of the most recognizable religious images in the world. Along with the Crucifixion, Last Supper, and Madonna and Child, these poses are easily identifiable to many museum visitors,” said S. Brent Plate, a visiting associate professor of religious studies at Hamilton College in Clinton, N.Y., and author of “Blasphemy: Art That Offends.”

“If you want to poke fun at something with religious significance, or expand some ideas, you only need to recast one of these poses. We all know it’s sacred, even if I don’t personally identify it as such, I know that others do,” said Plate, who notes that some Christians will be offended by the work although a great many will not. “There is such a silliness to this piece that I think many will just laugh it off.”

According to the AGO website, the installation creates a “contemporary deity.” Placing “these modern-day idols in a classical biblical pose, alongside religious symbols from multiple faiths raises questions about belief systems and the rise of popular culture.”

Although it is debatable how serious the questions that the installation raises about belief systems are — and the films “ET” and “Star Wars” arguably offer more thought-provoking reflections on religion — it is interesting to consider the connections between the Crucifixion and the Hanukkah story.

The canonicity of the story of Judith slaying Holofernes has been hotly debated by Jews and Christians alike, but the story, which relates to Hanukkah, has relevance to both faith traditions. Further, John 10:22-23 tells of the “Feast of Dedication” in Jerusalem, which is often interpreted to be Hanukkah.

And, two chapters prior in John, Jesus referred to himself as “the light of the world.” While he may not have had ET and Yoda in mind, the Hanukkah lamp symbol seems quite appropriate.

What Do Menorahs Have To Do With Madonnas?