Turning His Lens on Male Vulnerability 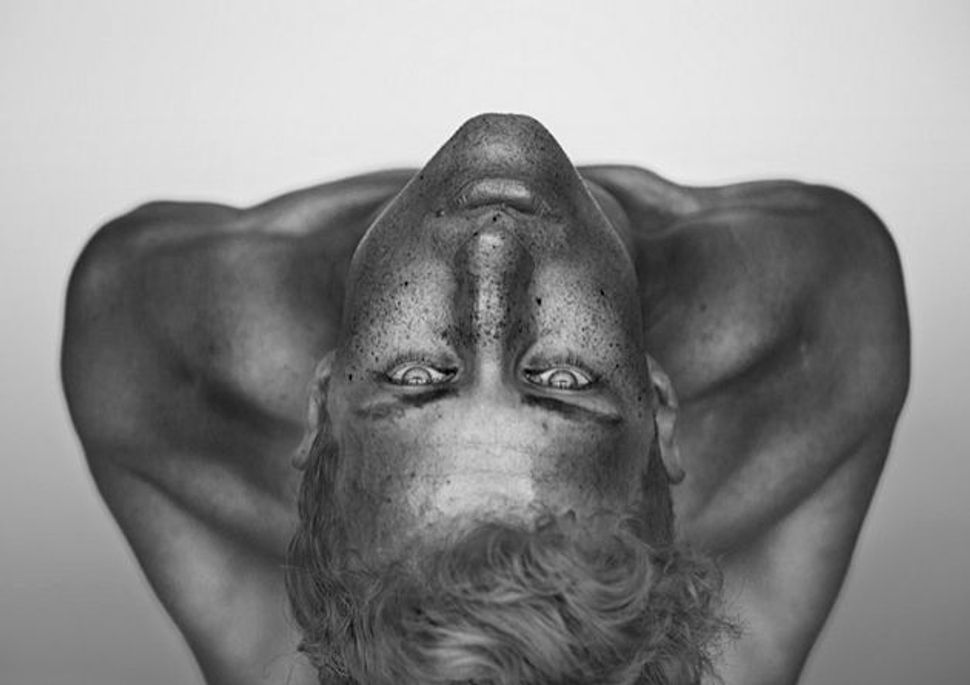 Photographing graceful male dancers in New York may seem a long way from taking pictures of gruff IDF soldiers in Israel. But for 27-year-old lensman Nir Arieli, the progression makes perfect sense. “I always had an agenda to find that gentleness and sensitivity hidden in the soldiers I photographed,” he says, “which is something I do in my current work.” For his new project, “Inframen,” on view at Daniel Cooney Fine Arts in Chelsea through March 8, Arieli used an infrared technique that emphasizes imperfections like scars, stretch marks, and sun damage on dancers; the effect’s beautiful and a bit spectral.

Born in Tel Aviv, Arieli served as a photographer for Bamachane, the official magazine of the Israeli army; after emigrating, he earned a BFA at the School of Visual Arts in New York. His career’s steamrolled since then, with clients including the Juilliard School, the Alvin Ailey school, and his alma mater, The School of Visual Arts, among others.

Michael Kaminer: You launched your career as military photographer for the IDF magazine Bamachane. How did that experience influence your work now?

Nir Arieli: I felt lucky that I could do something creative like photography in my service. I was sent to do both documentary and portrait work. It is then that I learned that I’m not a photojournalist but more of a director. I like to stage and interact directly with my subject. Supposedly, my work now is completely different. It’s about ideas that I’m interested in, people that I choose and themes like dance, which is a million miles away from the military landscape. However, back in the military I was photographing a lot of young men in uniforms who were busy with how their masculinity reflected and how well they can camouflage their vulnerability, which is considered unnecessary in that environment.

Your bio says you “expose a component of masculinity that was buried in the course of human history under the heavy burden of rigid gender conventions.” Does that specifically connect to being born and raised in Israel?

I honestly don’t think so. Men all over the world are educated by society that it’s not right to perform gentleness, show uncensored emotion or vulnerability. It’s true that the Israeli man is considered hypermasculine, but like anywhere in the world, I know Israeli men who prove that all of these false ideas can be knocked down. In my work I’m trying to show the beauty in giving up on these cultural codes.

The point of the work is that there shouldn’t be any emotions that we are allowed to feel or perform and are classified as masculine or feminine. The kind of masculinity that I’m trying to define is that it can be sensitive and gentle, without feeling the need to apologize for that.

Because of the focus on the male body, do people try to pigeonhole the work as gay or categorize it some other way? If that happens, what’s your response?

The work doesn’t deal with sexual orientation, and people don’t usually try to classify it as a “gay-only.” The models are both gay and straight and both social groups have work to do to get to the ideal emotions-free reality I’m talking about. However, the work was described before as one that has homoerotic undertones, and in that case that makes a lot of sense. I am a gay man and my artistic perspective and practice are naturally affected by who I am.

What kinds of reactions have you seen your photos draw from viewers? I’m wondering in particular how other men respond.

The “Men” series got a home-page feature on the Huffington Post, there were more than a thousand comments and eight thousand shares on Facebook, and a heated discussion. Most of the comments were mean and many of them by men who, I think, felt like their individuality was threatened. However, many women responded there too, claiming that they are not attracted to this kind of masculinity. The reactions that I get personally are always positive. I think that men who are confident with their masculinity are generally more accepting of these ideas.

Are reactions to your work different in Israel than here in the States? What about other parts of the world?

The reactions are similar everywhere. But I think in NYC people are having a less emotional response. I ones got an email from a women who lives in conservative Scottsdale, AZ. She told me that she never understood art and when she saw the work online she started uncontrollably crying. She said every image evoked something from her, and that really touched me. It made me realize that the web has such a great power in this age and time. If someone that I’ve never met and will probably never meet, could see exactly what I saw when I made this work, and started to value art, that’s just incredible to me. I do get emails from certain countries more than others, Brazil for some reason is the country that sends the most love.

Any plans to photograph women?

Every once in a while I try and I feel that I’m not getting as good a result. When I’m thinking about it, I believe that in order to make a really good portrait of someone you need to know something very private about them. With men I have that because I am one, and women in some sense are inaccessible to me on this level. I’m testing for a new project now that might include large groups of dancers together, women included.

Why have dancers have become the focus of your work the last few years?

My cousin Tal is an incredible dancer. When I was a student in SVA he was a student in Juilliard. He introduced me to his dancers friends and exposed me to their performances. I realized then that dance fascinates me. If I can say something personal, I don’t dance at all, not even at a party. I admire dancers because they can do what seems to me impossible. The training process of a dancer teaches the body to do things that it can’t do naturally. I observe it like a child, like it’s a superpower. Aside from the physical qualities, these are people who are so dedicated to what they do, subvert norms of gender and thrilled to collaborate on projects of different art mediums — It’s quite a pleasure collaborating with them.

What does the infrared process brings to your photographs?

The infrared processing brings to the surface everything that is in a warm tone, so everything that is under our skin suddenly comes out. Scars, stretch marks and sun damage are turning dark and more visible. This is not a flattering “look,” but with the dancers, who are in an excellent physical shape and in their early 20s, it’s interesting. The body is the dancer’s tool, it is so beautiful but also abused and often injured. It’s fascinating looking at it with this light. It also feels like creating a new kind of intimacy of the portrait, stripping someone from not only their clothes, but their skin too.

Turning His Lens on Male Vulnerability