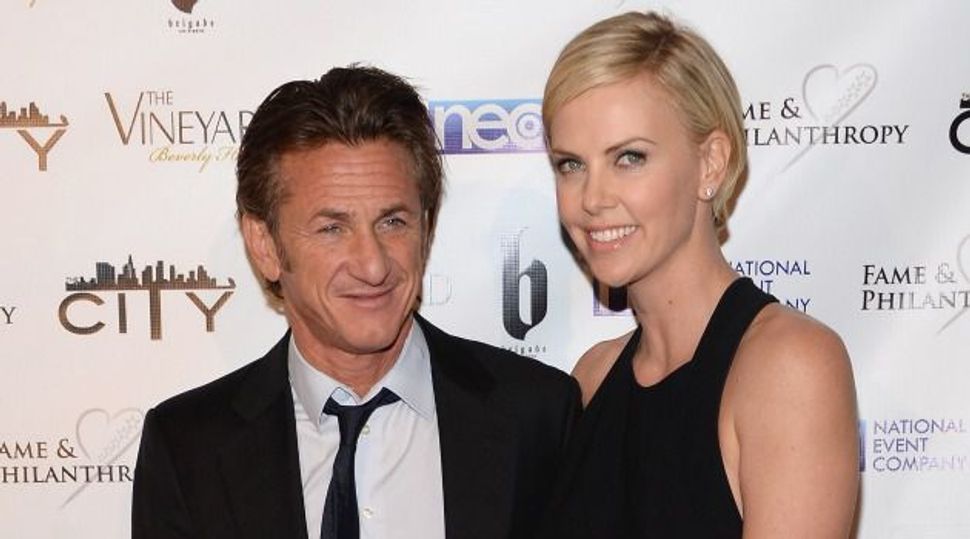 (JTA) — Who needs another Oscar when you’re about to be crowned the 2014 Champion of Jewish Justice? Not to put words in his mouth or anything, but we’ll bet that was what two-time Academy Award winner Sean Penn was saying to his girlfriend Charlize Theron as soon as they stopped “making out like crazy“ at Madonna’s Oscars after-party.

Okay, so maybe we’d lose that bet, but for reals, Penn is set to receive the honor at This World: The Values Network’s annual dinner in May. The organization is helmed by Rabbi Shmuley Boteach, who singled Penn out for his above-and-beyond efforts to help free Jacob Ostreicher, an Orthodox Jew from Brooklyn imprisoned in Bolivia.

“One of the highest Jewish values is to rescue a person from imprisonment,” Boteach told 6NoBacon.

While the former rabbi to Michael Jackson admits to disagreeing with the left-leaning Penn on most issues, he was amazed by the actor’s commitment to the Ostreicher case. “You never judge a man by his views, you judge him by his actions,” he said.

Ostreicher was in Bolivia in 2011 working on a rice-growing venture he’d invested in when he was arrested on suspicion of money laundering. He was also accused of doing business with drug traffickers. No proof was ever provided in court. The father of five was held in what has been described as a squalid, inhumane prison for 18 months before being placed under house arrest. According to The New York Times, Penn had a hand in the transfer.

Penn’s involvement in the case made headlines in May, when he spoke at a congressional hearing intended to pressure Bolivia to release Ostreicher. In December, Ostreicher finally escaped, thanks to what Penn called a “humanitarian operation” that moved Ostreicher across the border into Peru. Penn, who was reportedly part of the operation, remained by Ostreicher’s side upon his return to the U.S.

“Penn had no obligation to risk his life for Ostreicher,” said Boteach. “I’d like to think he was moved by the simplest of reasons – to save another human being in need.”

No word on whether the rights to this truly remarkable story have been optioned for the big screen, but it sounds like the stuff of a great thriller. Or a buddy comedy about a spunky rabbi and a surly actor who, against all odds, find some common ground. Oscar material, for sure.