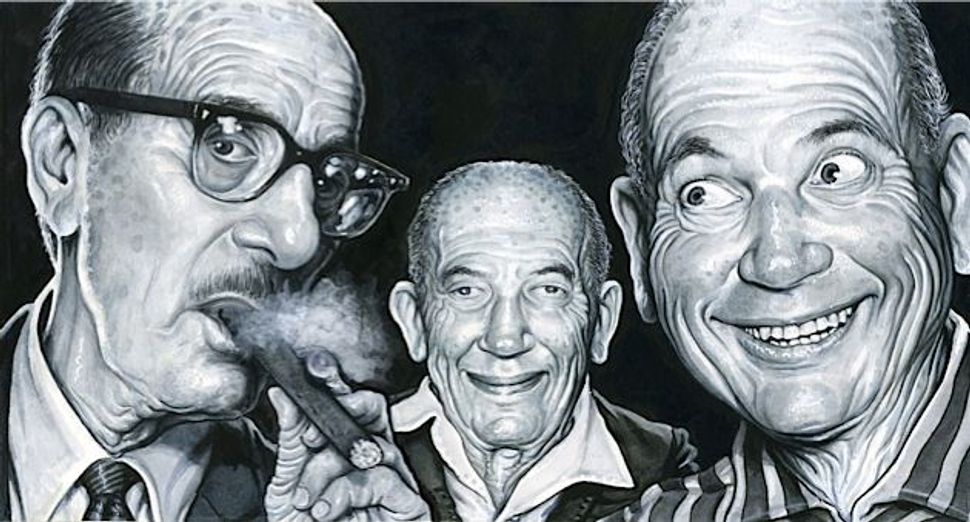 Did you hear the one about the old Jewish comedians who got hung on the wall?

Seriously, a new show at the Society of Illustrators gallery in Manhattan is showcasing original paintings from Drew Friedman’s cult trilogy “Old Jewish Comedians” (Fantagraphics), along with a trove of memorabilia from Friedman’s own collection.

Spread across two floors, the 110 nightmarishly funny illustrations also include Friedman’s warts-and-all illustrations for media outlets like The New York Observer, and a terrifying Woody Allen portrait for “He Said/She Said,” a 1996 comic book about the director’s split from Mia Farrow.

Friedman attended New York’s School of Visual Arts from 1978 to 1981, where he studied under legendary comics masters like Will Eisner, Harvey Kurtzman, Edward Sorel, Stan Mack and Arnold Roth, as his bio explains. He launched his career in the 1980s writing and illustrating what he calls “morbid alternative comics,” often collaborating with his brother, writer Josh Alan Friedman. He’s gone mainstream since then, supplying illustrations to everyone from The New York Times to Esquire to The New Republic.

It’s hard to pinpoint exactly why the old comedians have struck such a chord. “The subject of humor speaks to everyone, and the cultural aspect of Yiddish theater and comedy has huge appeal,” says Anelle Miller, the Society of Illustrators’ executive director. “But I’d also rank Drew with people like Ed Sorel, who did this great satirical work while continuing his illustration practice.”

The Forward caught up with Friedman a week after the show’s opening, where he mugged for photos with OJC subjects like Robert Klein and Abe Vigoda — and future OJCs like Gilbert Gottfried.

Michael Kaminer: What is it about these portraits that’s struck such a chord?

Drew Friedman: I can only speculate. For these kinds of projects, I’ve always wanted to be truthful to myself, and I never think about reactions. People pick up on that, and find it refreshing. And also, people are fascinated by liver spots. People at the opening came up to me asking why I wanted to draw liver spots. I’m sure one day I’ll be cursed with thousands of liver spots — serious payback time.

When you started the Old Jewish Comedians project, did you think they’d hang in a gallery one day?

I never considered that. They were done specifically for the books. It was never on my mind that they’d be hanging in a gallery one day with some of the old Jewish comedians looking at their own portraits.

Abe Vigoda came to a reception, and Larry Storch is on your panel. How have they reacted to the work? What was it like meeting them at the opening?

They had a ball. Robert Klein complained a little bit because his portrait was downstairs. I told him older comedians were on first floor, younger guys like him downstairs. He felt better after that.

Is there anyone who’s said they hated their portrait?

Jack Carter didn’t like his. The LA Times covered the book, and the reporter asked him how he felt about being in the book, which he hadn’t seen. His response was something like, “Old? I’m not old. And Jewish? I don’t work Jewish.” A lot of these guys are Jewish , but they don’t work Jewish. So he was offended. Then he saw his portrait, and got angrier — the liver spots, the stupid hair. He got in touch and told me to draw him again. But it’s one portrait per Jew.

Seriously, the last thing I wanted to do was upset these guys. But some were unhappy because I outed them with their real names. Just about every one of them changed their names to get work outside the Catskills or New York. Carl Reiner, Menashe Skolnik, and Myron Cohen kept theirs. But everyone else changed theirs. Sid Caesar didn’t want “Isaac Sid Caesar” to appear in book.

The name changes bring an element of social commentary, especially when you read the bios on the wall at the gallery — which weren’t in the book. Is that something you intended with the original portraits?

I guess it emerged. There are enough Jewish history books out there. When I realized all of them changed their names, that was enough to note.

I need good reference photos, and I’ve saved many over the years from magazines and other clippings. From the photo, I make a rough sketch on acetate. Then I do a tighter pencil sketch. After that, I paint on top of the pencil. That’s how I get the details like liver spots and wrinkles. And I don’t erase pencil marks. I had a little black-and-white photo of Milton Berle lighting a cigar. When I saw it, I immediately said I’d love to have him on the cover of the first book, and portray him as angry—– with a cigar in mouth, pointing a bony finger. Later in life, he always seemed angry.

Howard Stern compared you to Picasso. But who are your real influences, and which cartoonists do you admire?

People like Robert Crumb and Dan Clowes. Crumb has been one of my main influences since I was young, when I wasn’t even supposed to be reading his work.

Have some less famous old Jewish comedians approached you, begging to get drawn?

Not necessarily begging, but some have asked. Originally, I couldn’t find contemporary images of Larry Storch, but he wrote and sent me a great photo. I’ve also drawn younger comedians like Jeff Ross, and I’m about to do Gilbert Gottfried, who’s a friend.

You also collect Old Jewish Comedians memorabilia, much of which is in the show. What’s your most prized piece?

Hard to say. Probably something as innocuous as Pinky Lee shoelaces or the Joey Bishop playing cards. I love the Milton Berle car. It’s a tin toy they made at the height of his popularity. I think they took a template of some face they’d used before and just said it was Milton Berle. There’s a little Milton Berle shrine that we erected on first floor of the gallery. The car’s on display there.

These comedians come from a world that’s almost vanished. Is there any remnant of that left in New York?

I would say officially that it’s all gone. It can still be found occasionally at the Friars Club, though it’s mostly accountants and proctologists now. Manhattan’s a different animal than it was. You can occasionally see Abe Vigoda walking around or Irwin Corey asking for money at the 59th St. Bridge. Only Joe Franklin’s office hasn’t changed. Let’s just say it’s a little cluttered — like an episode of “Hoarders.” It’s completely stuffed with books and records, and he’s like Mrs. Havisham, sitting there with this stuff around him. Can still find little pockets of that around the city.

When can we expect “Old Jewish Comedians, Volume 4”?

My new projects are a complete step away from “Old Jewish Comedians.” People keep asking if I’m going to draw Black comedians, Irish comedians. I don’t know, but I’m done with the Jews. I considered doing fourth book, because I left out a lot. Feel bad I didn’t include Arnold Stang. I have a long list. But I don’t think that’s going to be.

**As part of the exhibition, you’re on an April 24 panel on how Jewish humor “grew out of Yiddish culture, defined New York City’s character in the early 20th century, and filtered into our American culture.” What can we expect?

I hope it’s chaotic. My main concern is that it’s funny, and not bogged down in any particular thesis on the origins of Jewish comedy. I don’t want it to be serious. I’m going to talk about why I did these books. Everyone will talk about their careers, and we’ll open it up to Q &As. I hope people end up fighting on stage, screaming at each other.