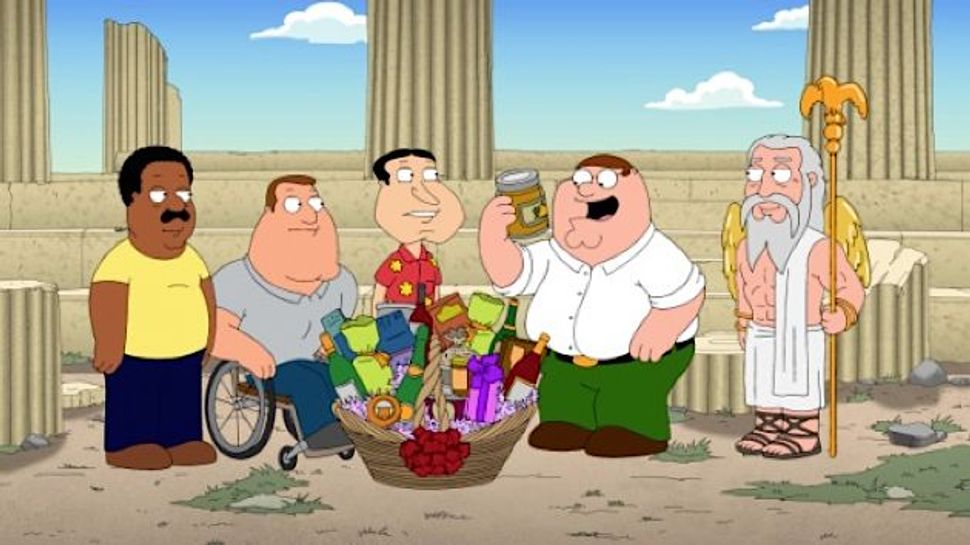 In the episode, main character Peter Griffin and his friends are off on a typically absurdist search to find God and to get Him to stop thwarting their favorite football team, the New England Patriots. In a Jerusalem square they spot Mort Goldman, the obviously Jewish pharmacist from their hometown of Quahog, Rhode Island.

Actually, they spot a “flock” of bobbing Morts, whom they attract by tossing pennies, as you might use popcorn to draw pigeons. The message being, Jews love money. MacFarlane used similar imagery in a much earlier episode, in which Peter’s anti-Semitic father-in-law tries to use a dollar bill tied to a string to distract his wife, who has just told Peter’s wife Lois that she was raised Jewish.

Anti-Semitism is a serious charge, made too quickly and too often. But as someone who has followed MacFarlane’s career, I think it is well past time to call him out. His star is clearly on the rise in Hollywood — he has hosted a major awards show, been writing and directing movies and, most recently, produced the Fox series “Cosmos.” And thus far he has been unimpeded by his consistent record of anti-Semitism.

At the 2013 Oscars, MacFarlane drew criticism for a bit in which Ted, the stuffed bear namesake of his hit movie, tells the movie’s co-star Mark Wahlberg that if he “wants to work in Hollywood” he has to be Jewish. In an infamous 2012 tweet to Emmy voters, MacFarlane posted a copy of a “For Your Consideration” he claimed the Hollywood trade press had rejected. It pictured Peter Griffin, whose “Family Guy” was in danger of being shut out of awards nomination, with the caption: “Come on you bloated, over privileged Brentwood Jews. Let us into your little club.” Typically, the words and the voice are MacFarlane’s, but they are spoken by his creations, which enables him to escape responsibility.

It is in MacFarlane’s cartoon series that anti-Semitism is most consistent and pronounced.

Although Mort and his family are regular characters, Peter claims never to have met a Jew, much less found one to be his accountant, in the 2002 episode “When You Wish Upon a Weinstein.” In the episode, Peter sings “When You Wish Upon a Jew,” crooning that he needs a Jew “to teach me how to whine and do my taxes.” His prayer is answered when chance brings him together with the amiable Max Weinstein, who helps Peter with his finances and even helps his equally doltish son Chris with his homework. This good deed prompts Peter to exclaim: “My God! Is there anything you people can’t do? I mean, other than manual labor?”

Fox executives blocked the episode from first-run broadcast, although it later appeared in syndication and on a DVD compilation. In the DVD commentary, Fox’s decision still rankled MacFarlane, who said the episode was based on his personal experience as a gentile in Hollywood. “This thing made me so angry. It was disgusting.”

In a 2009 episode, “Family Goy,” Peter dresses up as a Hasidic Jew and, standing outside of a synagogue, tells worshippers that he “went shopping and they wanted $800 for a TV, but I us’d them down to $500,” prompting a beating.

True, other faiths take their knocks in “Family Guy,” and some of the representations of Jews and Judaism in the series are favorable. Other animated comedies poke fun at Jewish foibles, as well. The Simpsons’ Krusty the Clown is a lapsed Jew and a committed reprobate. South Park’s Kyle Broflovski is a conflicted Jewish kid with a yente mother and a lawyer father who wears a kipa. Another character in “South Park,” whose co-creator Matt Stone is a secular Jew, is a despised anti-Semite and occasional neo-Nazi. But the satire in these shows, often written by Jews, is knowing and good natured.

In “Family Guy,” in contrast, there is consistent meanness that reinforces classic, anti-Semitic stereotypes: greedy, cheap, cowardly, whiny, averse to physical labor, and in control of Hollywood.

Seth MacFarlane, it seems, is simply a wittier version of Mel Gibson.