The Jews Who Fought for Britain 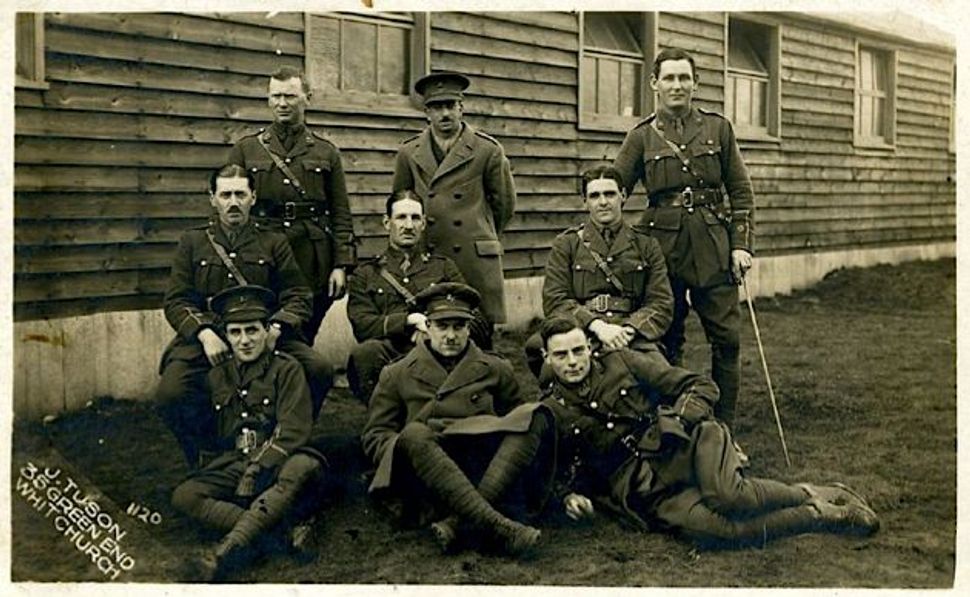 During the early stages of the First World War, Yiddish recruitment posters, published by the Joint Labour Recruiting Committee, were displayed in London’s East End. They appealed to Jewish youth, “to do their duty to the country.”

In England there are thousands of Jews who should be grateful to it for their freedom and justice … and in general they have been accepted here, free from racial prejudice and racial hatred. We, who have many times raised our voice for the welfare of the Jews, ask them now to demonstrate that we were justified in saying what we did.

The poster is one of the many exhibits in “For King and Country?,” a new exhibition that opened earlier this week at London’s Jewish Museum, in partnership with the Jewish Military Museum. It explores the British Jewish experience of the First World War and includes oral histories, memorabilia, letters, embroidered postcards, sepia coloured photographs as well as personal artefacts like identity tags, symbolic silk handkerchiefs and uniforms.

“[The exhibition] is a wonderful opportunity to tell the wider, different stories of service in order to try and represent the multiplicity of experience,” explains Roz Currie, curator of “For King and Country?” It also demonstrates what it meant to be a British Jew at that time, and it examines the divisions between the long-standing settled members of the community, keen to show their patriotism and serve, and the more hesitant, newly arrived immigrants who had fled the pogroms of Eastern Europe.

In 1915, a Jewish fighting force, the Judeans, was established partly to enable the Russian immigrants to join up; prior to conscription in 1916, non-nationals who had arrived in the 1900s were unable to serve in the army. The 38th Battalion of the Royal Fusiliers, also known as the 1st Battalion of the Judeans, was described as the “schneiders regiment” since many of its recruits were tailors. Film footage shows the battalion parading through the streets of London in 1918, past the Lord Mayor, before finishing on Whitechapel Rd where members of the political and military elite met them. They then enjoyed a kosher lunch before leaving for war.

The exhibition provides insight into the difficulties of life on the front, and tells the stories of reluctant fighters such as the poet and painter, Isaac Rosenberg who was, says Currie, “too sensitive, an awful soldier who read Hamlet in the trenches.” Renowned for his war poetry, visitors can hear excerpts of his work. He was killed at Arras in 1918.

The picture “The Merry-Go-Round” (1916) by artist Mark Gertler, who studied at the Slade School of Art with Rosenberg, has a rather foreboding presence. It shows identically uniformed men, their mouths open in what appears to be a scream, seated on a carousel. In modern times it has been interpreted as an expression of horror at the war. Although Gertler described himself as a “passivist” (as he wrote it), at the time, the anguish portrayed in the picture was also considered to be related to his Jewish roots.

One of the most remarkable contributions to this exhibition — and representing one of the few voices of women’s wartime experience — comes from the military nurse Florence Oppenheimer, who later became a British household name as an authoritative, best selling Jewish cookery writer under her married name, Florence Greenberg. Her diary, which is displayed for the first time and in interactive digital form, is not only a rare object in itself, but its entries include photographs that depict her life and work on board hospital ships across the Mediterranean and in Palestine.

Also displayed in digital format is the correspondence of Marcus Segal, who joined up in 1914 at the age of 17 and wrote some 160 letters to his family from the front line. He died in battle at the age of 20. Judaism was important to him and while serving in the trenches we learn that he built his own succah, said prayers over the graves of fellow Jewish soldiers and organised services with a senior chaplain to the forces, Reverend Michael Adler. Marcus’s well-thumbed prayer book is on display.

One of the last exhibits is the British Jewry Book of Honour, which lists the names of Jews who served; a record partly compiled to counter later anti-Semitic claims that accused the community of not having played its part.

From a Jewish population of nearly 300, 000, approximately 40,000 served, out of which it is estimated that 2,500 were killed and a further 9,000 were injured. “For King and Country?” has given voice to the many forgotten, ordinary Jews whose contribution was invaluable. They certainly did their “duty to the country.”

The Jews Who Fought for Britain