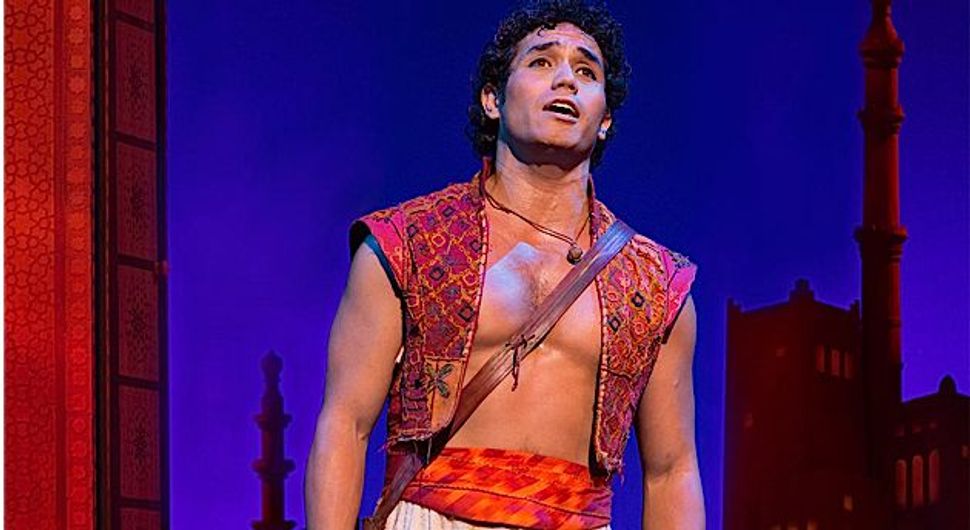 Adam Jacobs has a 1,000-megawatt smile that would put the young Donny Osmond to shame. And he puts it on constant display at the New Amsterdam Theatre in the heart of Times Square, where he plays the title character in the latest Disney megahit, the well-received “Aladdin.”

The son of a Filipino mother and Jewish father, Jacobs sings and dances up a storm as he makes the transition from street ragamuffin to successful suitor for Princess Jasmine’s heart.

Jacobs spent some time recently with the Forward to discuss how he became the go-to actor for Disney royalty, the difference between taking over a theater role and creating one, and balancing princely and fatherly duties.

Curt Schleier: This is not your first shot at Disney royalty, is it?

Adam Jacobs: Not if you count Simba [a role Jacobs played in “The Lion King”] as a prince, even though he’s a lion. He’s the king of the pride. Now I’ve stepped into the role of Aladdin who becomes Prince Ali. I didn’t go into this career knowing that was going to happen, but I’ll take it.

It seems to run in the family.

I have a sister named Arielle. She originated the role of Gabriella Montez in [the theatrical production of] “High School Musical.” And my wife, Kelly, was the dance captain at this same theater in “Mary Poppins” when the show closed. So we’re a Disney family.

Given your credentials, did you have to audition for the part?

Actually when they first did the New York workshop I didn’t have to audition. I was playing Simba on the national tour of “Lion King” and Thomas Schumacher, president of Disney Theatricals, saw me in the show. Shortly thereafter I got a call that they wanted to fly me in [to New York] to do developmental work on the show. I didn’t even know they were working on the project. And they wanted me specifically. That never happened before.

I imagine there must be a significant difference between stepping into an established role such as Simba, and creating a role.

It’s always an actor’s dream to create a role on Broadway, and the fact is that this show came at the right time for me. Actors like to say timing is everything. Had it come a few years later I would have been too old. The show has been in development for five years. I did the New York workshop and the Seattle run [where the show premiered at the Fifth Avenue Theater]. I’ve been with the project for three-plus years and watched it grow into this magnificent show. I love the process, of seeing all the changes and how everybody adopts to the changes, the little tweaks here and there that make it cleaner. It’s been really interesting.

What’s the difference between assuming and creating a role from an actor’s point of view? Is it more dangerous to be first?

You have more freedom when you’re creating a role. I’ve been working through this whole process with Casey Nicholaw, who is a brilliant director of comedy. Together we were able to find out where Aladdin lived, where his character should be in the show. Obviously, when creating a role there’s more room for error, but when you have a brilliant director working with you it makes it a lot easier.

Did you watch the animated movie?

I grew up with it. I watched it countless times as a boy. “Aladdin” was one of those movies that stuck with me; that, and “The Lion King.” So it’s kind of ironic that I got to play both those roles, especially Aladdin. He was one of those characters who called out to me. He was struggling to do better and to become the person he knew he could be despite his [impoverished] start. It’s kind of a Cinderella story for a guy. There are not a lot of Disney movies where the boy is the main character. Usually it’s the princess.

This has been a big couple of months for you — your debut as Aladdin, and as a dad.

Yes, twins. They’re seven weeks old. It’s a lot. A bit overwhelming. Luckily we have a lot of help. My wife’s family has flown in, so we’ve been able to sleep at night.