Jonas Armstrong Plays the Role of a Lifetime 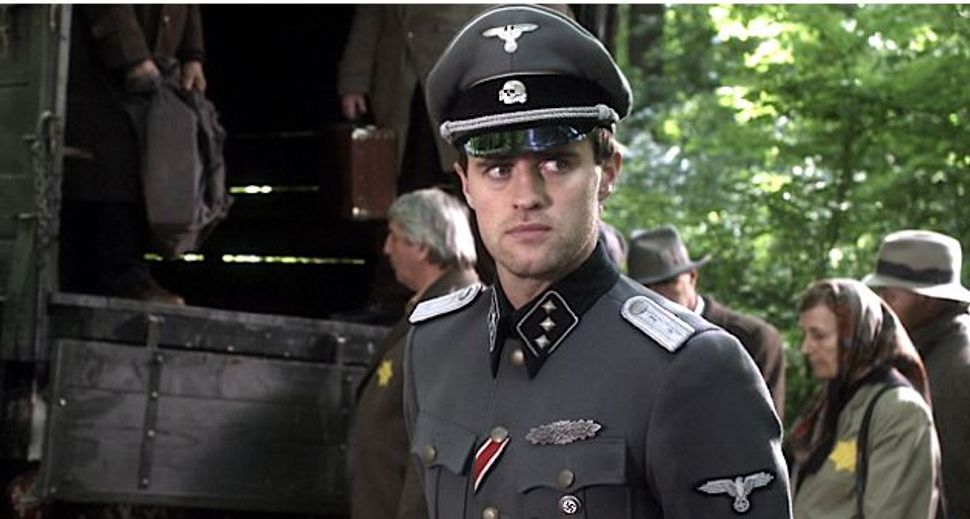 Irish-born British actor Jonas Armstrong stars in “Walking With the Enemy,” a story set in Hungary during the last months of World War II. Inspired by a true story, it tells of a man who used a stolen Nazi uniform to free hundreds of Jews. It’s an action story about love and courage directed by Mark Schmidt from a screenplay by Kenny Golde. Academy Award winner Ben Kingsley also stars.

Armstrong plays the lead, Elek Cohen, a fictional character who was inspired by Hungarian Pinchas Tibor Rosenbaum, who was able to steal a uniform from the Arrow Cross, an extreme Hungarian faction responsible for the deportation and death of tens of thousands of Jews.

Just when it seems that the topic of WWII has been exhausted, yet another gripping story comes out about the atrocities of the war and what Jewish people had to do to survive. The Forward’s Dorri Olds sat down for an interview with Jonas Armstrong.

Dorri Olds: How did you prepare for this role?

Jonas Armstrong: I did my research, reading and viewing.

No, not fictional films. I watched documentaries only. I spent time in Budapest and visited the Glass House [where Swiss diplomat Carl Lutz printed thousands of documents to protect Jews]. I went down Andrassy Avenue, which is where the Arrow Cross had their headquarters and now it has been transformed into a building that was dedicated to the Jewish population that was lost…. I did as much as I could in such a short time. Before the film started I had only three to four weeks to prepare. Once filming started I was pretty busy. I did as much as was possible and kept asking questions, it was an ongoing discussion throughout filming with the director and writer.

When you were in school did you study the Holocaust?

Oh yeah, of course. I managed to get myself the highest grade in history. [Smiles]

You studied in England, not Ireland?

Yeah, I’m Irish but I was raised from age 7 in England. I’ve always taken an interest in wars and my main studies in history were about the Second World War. That’s why this movie project appealed to me — it’s one of the few things that I am really interested in.

How did you become involved in this project?

I auditioned. [Grinned] I got the script and my agent called me and said, “They’re really keen to see you.” I’d just come off a long job and went down to meet the director Mark Schmidt and read with one of the producers. That went really well and they asked me to come down again. I spoke to Mark about his background, where the project was born and why he was making the film. We had a long discussion then he said, “Do you want to read?” You sort of get an inkling as a performer if a meeting has gone well. I didn’t walk out of there thinking, “Oh, yeah, I’ve got it,” but I felt good when I left the room. I thought it was a good crew of people and looked forward to what we could accomplish together.

At the end of a day of filming was it hard to snap back to being yourself?

Yeah. Some of the scenes are very harrowing, very dramatic and affecting. You invest so much for it to come across on the screen. The cast was so big and people were coming in and coming out and we’re all away from home and staying in hotels. People went off drinking and eating but I wanted to just stay in while I was there, in order to do justice to the project. I found myself wanting to honor it and keep myself in the mindset of it.

Are you a method actor?

I don’t keep myself in character the whole time. That would just be torture. What I do is constantly think and it’s hard to shut off from that, especially when you’re doing something of this magnitude and as important as this project is. I mean it is about the war and the Holocaust and it’s not just something you can be blasé about and then go out and forget all about it. The shoot was for a few months so it’s not just a flash in the pan. It’s not often that you get these parts so I wanted to really give it 100%.

Did you meet any Holocaust survivors while you were in Budapest?

Not when we were filming, after that, yes. In screenings people came and talked to me. We had screenings in London, and Florida, which both had predominantly Jewish audiences whose parents had been in the concentration camps.

Were there any comments that stand out in your mind?

While watching the film with Jewish people I felt very aware of the audience’s responses. I was very nervous. I wanted the audience to see what I’d tried to portray was believable while also honoring the history that took place. They were very complimentary. There was one lady who said, “That’s the story of my father.” I asked her, “What do you mean? Did your father dress up in Nazi regalia?” She said, “No, not exactly like that but my father went out of his way to help as many Jews as possible.” She was in floods of tears. It was really emotional.

What role do you most look forward to playing in your career?

My training is based in theater. A play that has always been close to me is “Othello.” I’d love to play Iago whether onscreen or onstage.

Would you want to play it on Broadway?

Yeah. Of course! And onscreen, whatever. It’s a very Machiavellian character — devious, ruthless and plotting with all kinds of things going on.

Did you always know you wanted to be an actor?

I wanted to be the center of attention and was always dicking around with voices and impressions to make people laugh. I was quite late in starting compared to other people who always wanted to do it from a very young age. I didn’t get involved in it properly until I was 17. That’s when I took theater studies in school. Two years later I did all the auditions for the drama schools in London and got a place when I was 19 and graduated when I was 22. I’ve been acting professionally for 10 years now.

Are your parents supportive?

Oh yeah. They’re quite liberal, my parents. They wanted me to do what made me happy, whatever I was passionate about. I was never pushed down any paths I didn’t want to go down. They’ve been great.

Do you have a favorite, or a few favorite male actors?

There are so many but I think Daniel Day Lewis is a standout. I’ve always liked him. He was the first actor I wanted to emulate. I saw “My Left Foot” and used to mimic him. Then, in “The Name of the Father,” and all the projects before he became [whistles and spreads arms out wide] massive. Yeah, I’d say he’s definitely my favorite. He comes from the method ilk.

Jonas Armstrong Plays the Role of a Lifetime