Won Over by Ballroom Dance 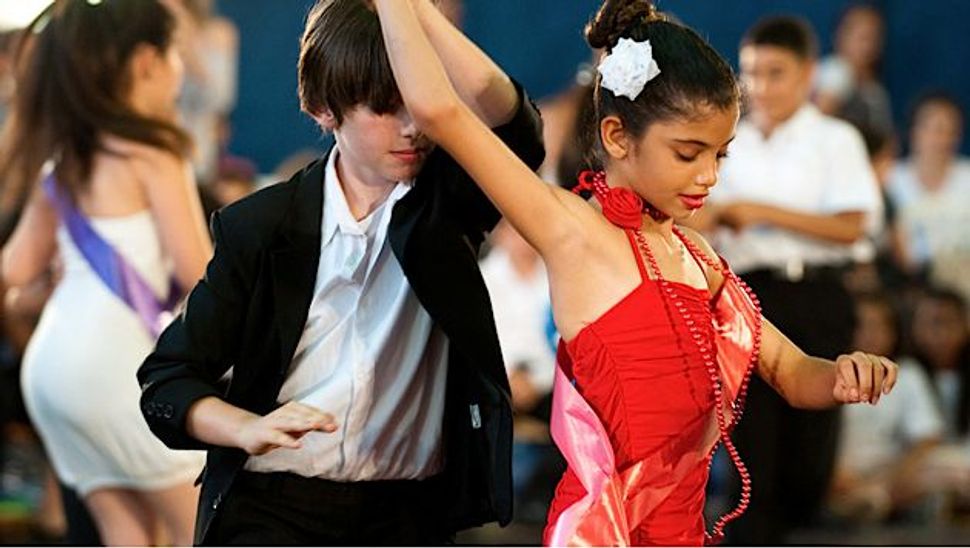 Israeli-born director Hilla Medalia didn’t exactly jump at the opportunity to direct “Dancing In Jaffa.” Her initial reaction was, “there are already so many films about Palestinian and Israeli kids being brought together.”

But then she met Pierre.

Ironically, that was my reaction, too: Did we really need another feel-good movie about Arabs and Jews when every day brought more headlines of diminishing prospects for peace?

And then I met Pierre. Cinematically.

Pierre is Pierre Dulaine, an internationally known ballroom dancer whose volunteer work bringing dance to inner city school children was the subject of a 2005 documentary, “Mad Hot Ballroom.” The following year, Antonio Banderas played him in a feature film based on his life.

I knew none of this when the film first unspooled. I don’t believe average viewers will, either, which is one of Dancing in Jaffa’s few faults. It would have been nice to learn more about Dulaine earlier on to help explain his commitment to this project.

Dulaine was born in Jaffa to a Palestinian mother and Irish father in 1944. His family, he says, “lost our home for the creation of Israel,” leaving when he was four “with guns at our back.”

He wants to do in his birth city what he did for kids in Manhattan: teach them to dance and broaden their horizons to the world’s possibilities. At first parents seem receptive, until they discovered that Jews would dance with Arabs (and, obviously, vice versa).

Most kids were not much better. Besides the yuck factor — preteen boys and girls dancing together? — there were also religious and political considerations. Islam forbids men and women from touching. At first boys and girls pull down their sleeves over their hands so they didn’t physically touch.

A Jewish girl says, “If my father sees me with an Arab he’ll kill me.”

Initially, Dulaine and Medalia introduce us to a Jaffa that I somehow missed on my escorted tour. Right-wingers demonstrate with signs claiming Jaffa is a Jewish city. Counter demonstrations are held by Arabs. Jews celebrate Independence Day; Arabs call it Yawm an-Nakba or day of catastrophe. It didn’t look as though this was going to be a feel-good movie after all.

Five schools are involved: two Jewish, two Arab and one mixed. Dulaine plans two classes every week for 10 weeks, but not surprisingly has trouble attracting students. In fact, there are times it appears he’s set to quit: “I thought I was really hot stuff, thinking I could do it.”

He brings his long-time dance partner, Yvonne Marceau, over to help him. Their dancing seems to demonstrate the possibilities to the kids.

And, yes, there is a happy ending as Jewish and Arab mothers sit side by side, laughing, speaking, watching their children. The most incongruous sight is an Arab woman in a burka filming her child through her eye slits.

It’s hard not to well up just a bit as you glimpse the possibilities and the power of music and dance.

The film focuses on three children: Noor is an Arab girl whose mother was Jewish but converted to Islam when she married a Palestinian man. Noor’s father died when she was young. She is unpopular and acts up — sometimes violently — in school. She is the most impacted by the program. Her attitude and schoolwork improve.

Alaa is a cute-as-a-button, perpetually smiling Israeli-Arab. He lives in a shanty with his struggling fisherman father and large family.

Lois is a Jewish girl brought up by a single mother. She works with Noor and dances with Alaa. One of the funniest scenes in the film is when Alaa visits Lois and asks about her father and her mother tries to explain a sperm bank.

An there have been 1,000 more who have learned how to dance and hopefully coexist since this initial group. Who knew that the tango is a dance for peace?

Won Over by Ballroom Dance