Forgotten Songwriter of ‘Twist and Shout’ 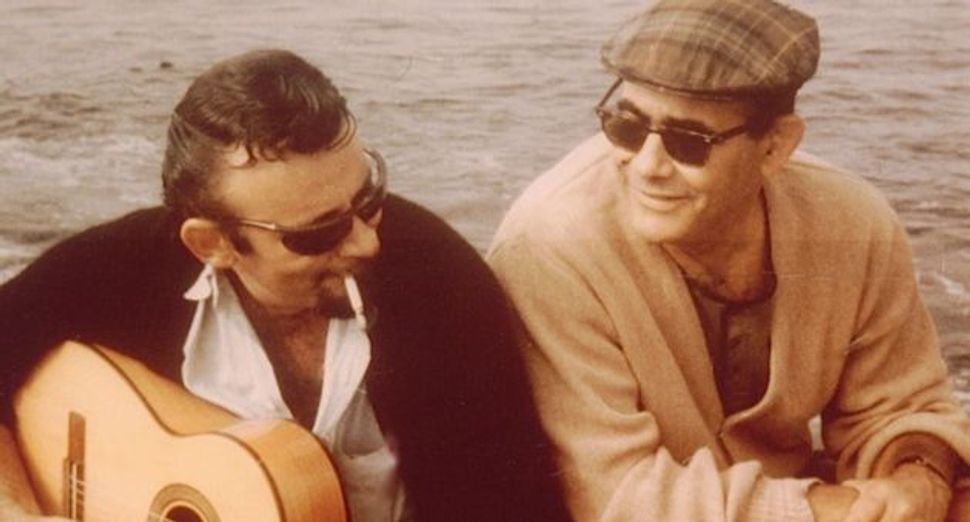 “Twist and Shout.” “Under the Boardwalk.” “Piece of My Heart.” “Brown-Eyed Girl.”

The songs are recognized almost everywhere. But their Jewish creator, Bert Berns, has nearly vanished into obscurity.

That should change this year, with a book, documentary, and stage musical — all inspired by Berns and his music. April 15 sees the release of Joel Selvin’s “Here Comes The Night: The Dark Soul of Bert Berns and the Dirty Business of Rhythm & Blues” (Counterpoint); in June, the off-Broadway musical “Piece of My Heart” will open at the Pershing Square Signature Theater in Manhattan. And a documentary on Berns is slated for distribution this fall.

Other Brill Building songwriters may have had the glory, but few influenced pop music as much as Berns. He stewarded the early careers of Neil Diamond and Van Morrison, co-founded Bang Records with music-industry heavyweights Ahmet Ertegun and Jerry Wexler, and recorded with legends like the Isley Brothers, the Drifters, and Ben E. King. And none other than Sir Paul McCartney extolled Berns and his music in a recent video posted on Time.com.

The son of Ukrainian-Jewish immigrants, Berns contracted rheumatic fever as a child, which ultimately caused his death from a heart defect in 1967. His son, Brett, and daughter, Cassandra, are now overseeing the multimedia celebration of their father and his work.

“I believe it is not only the greatest untold story in American music, but truly one of its greatest,” Brett Berns told the Forward. “At its heart it is a classical American Jewish story of an immigrant son from New York who changed the world with his music. And of a fighting Jew who battled time and the odds and the titans of the record business to make his dreams come true before succumbing to his damaged heart. And he wrote it all into his songs, putting his whole heart and soul into the music.”

The Forward caught up with Brett Berns from Los Angeles.

Michael Kaminer: A book, documentary, stage musical… 2014 is turning out to be the year of Bert Berns. Why now?

Brett Berns: My father died when I was 3 years old, and so I never knew him. Certain that he would succumb to his rheumatic heart, he would tell my mother, “My children will know me through my music.” I was never quite sure of the meaning of this riddle, as he had not only disappeared from my life but was lost to history as well. I eventually realized that only through the telling of his dramatic life story would his body of work be recognized. And so my sister Cassandra and I set out on a mission to elevate our dad to his rightful place in the pantheon. The biography led the way, revealing much of the story and music to us. Then the musical was born. And we simultaneously began to film interviews for a documentary. That all three projects would come to fruition in the same year is a dream come true.

Did you learn anything about your father from Joel Selvin’s book or the documentary that surprised you?

The most surprising revelation was the sheer magnitude of the story, both in terms of the music and the events that surrounded the making of it. For much of my life I only had a vague sense of my father’s legacy. I knew the hit records, but little more. And I had heard whispers of fierce battles at the end of his life involving titans of the music business and the mob. Through the book and documentary, we were able to piece together the puzzle of this extraordinary life — revealing not only a unique body of work, but a triumphant and tragic life story fascinating as any work of fiction.

Every piece of press about the book and show has some variation on “best songwriter you’ve never heard of.” Why do you think there may have been less recognition of your father’s work and contributions than those of others?

My father has been gone for so long that his memory has just drifted away. He was the very first of the New York songwriters who ruled over the ‘60s Brill Building scene to die, and very young at that. He never hired a press agent. He was not around to receive the numerous lifetime achievement awards of his peers. And he left bad bones with powerful people in the business — something which may or may not have contributed to his obscurity.

He was also an ardent Zionist and proud Jew. Can you tell us about that part of his life? Do you think it influenced his work in any way?

My dad was born in the Bronx to Jewish immigrants from Ukraine and was deeply affected by the Holocaust and the birth of Israel. The family was not religious, but he was a proud Zionist who went to great lengths in support of the State of Israel. He sat on the dais at the United Jewish Appeal. He planted trees for his children in Israel. And he sent his Italian buddies around to empty the wallets of his guests at the Van Morrison “Brown Eyed Girl” release party right after the Six Day War. He was a true fighting Jew whose mantra was “Never Again,” and I have been told that he brought that fighting spirit into his music as well.

You served in the Israeli army. How did your father react when you enlisted?

My father threatened to go to Israel during the Six Day War, but his life would not allow it and he died a few months later. When I was inducted during a nighttime ceremony at the Western Wall and received the red beret of the Paratroopers, I know he would have been proud.

What do you want the Bert Berns legacy to be?

Bert Berns should be recognized as one of the most important record men of the 20th century. He was responsible for bringing Latin music into rock and roll. He was a founding father of New York uptown soul. Unlike most of his peers, he would often write and produce his songs alone. And he was one of the few to achieve the trifecta of songwriter, record producer and owner of his own label — BANG Records. All in seven short years before his death at age 38. But my greatest hope is that his personal example will inspire all who come to know him — of a courageous and just man who treated artists with love and respect, stimulating them to supersede their abilities and make the greatest music of their lives.

Which of his songs is your favorite?

My favorite of his hit records are Erma Franklin’s “Piece of My Heart” and Garnet Mimms’ “Cry Baby.” But my father’s best works were not necessarily the hits, but songs like Lorraine Ellison’s “Heart Be Still” and Garnet Mimms’ “I’ll Take Good Care of You,” two autobiographical obscurities that are featured in the musical. This last song has perhaps the greatest personal meaning to my siblings and I, as our father’s songs have indeed taken good care of us in his long absence.

Forgotten Songwriter of ‘Twist and Shout’