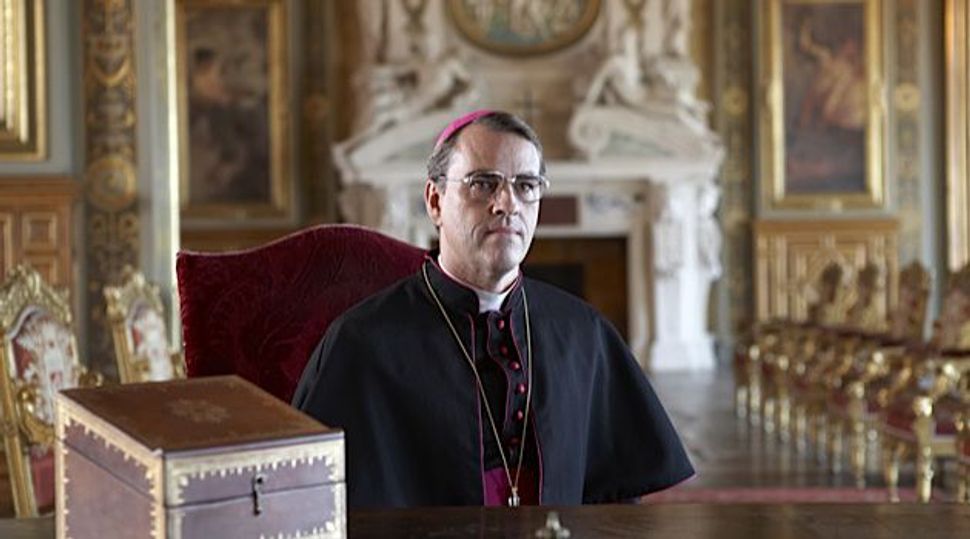 “If you don’t battle your characters, it’s very boring,” said French filmmaker Ilan Duran Cohen. For his latest movie, “The Jewish Cardinal,” he chose as his subject Jean-Marie Lustiger, one of the most divisive figures of Jewish — or should we say Christian? — life in France. Lustiger, the cardinal and archbishop of Paris from 1981 to 2005, was born with the first name Aaron to Polish Jewish immigrants and converted to Christianity at the age of 13, against his parents’ wishes.

A staunch conservative nicknamed “Bulldozer,” Lustiger made a high-flying career in the Catholic Church, becoming an influential voice in the French Catholic Church and a confidante of Pope John Paul II. At the same time, Lustiger, whose mother had died in Auschwitz, maintained that he was Jewish — which drew hostility from both Jews and Catholics. The movie focuses on the role Lustiger played in negotiating the departure of the Carmelite nuns who set up a convent in Auschwitz between 1984 and 1993, which fully displays Lustiger’s dual and paradoxical, yet at the same time genuine and charismatic personality.

The 90-minute biopic is Duran Cohen’s attempt to present a balanced, non-judgmental perspective on Lustiger’s legacy, leaving it to the viewer to judge the ambiguous character. The mystery surrounding Lustiger’s identity was intentional, said Duran Cohen, speaking with the Forward’s Anna Goldenberg on the phone from his home in Paris. The movie won the Grand Prix for Best French TV Drama at the Festival de Luchon in 2013, and will be released in select cinemas in New York, California and Florida on April 11.

Anna Goldenberg: What made you want to do this movie?

Ilan Duran Cohen: I was looking to work together again with my screenwriter, Chantal Derudder, after making a film on Jean-Paul Sartre and Simone de Beauvoir [“Les amants du Flore” (2006)]. She knew I love films about identity and identity contradiction. She proposed [a movie about Jean-Marie Lustiger], and I didn’t know much about it. I knew he was a convert but I didn’t know his mother died in Auschwitz… It’s a paradox, this story, and so mysterious to me. As a filmmaker, you’re always attracted to something you don’t comprehend at the start [and] you precede the audience in the discovery of the character. [Lustiger] is torn apart by his contradiction and his paradox. It’s even stronger than fiction. That’s why it makes great material for film.

Are any parts of the movie actually fiction?

Most of it is real, but at the same time it’s not documentary. So there are things we invented as screenwriters, so it can be transmitted as a movie. We weren’t in the Vatican with the Pope and him, so we had to project ourselves in there, and make up the dialogue.

Growing up and living in France, did you ever experience any anti-Semitism?

I lived in the U.S. for a few years, because I learnt filmmaking at NYU. When I was at the Jewish Film Festival in New York [this winter], I told them: New York is the city where I came to terms with my Jewishness. Jews are not an outcast; they are normal people and part of the community… Any Jew in France has experienced [anti-Semitism]. It’s not a problem; it’s an issue. You’re different, you’re a Jew. That’s why the story about the cardinal was so difficult for the Jews here. It was taken as a betrayal somehow, which it somehow was not. Whether or not you agree with his vocation, he was very truthful with himself… Some Catholics didn’t like him, and some Jews didn’t like him. He didn’t have it easy… The original title I wanted to give it was “Reconciliation,” because he reconciles with himself, with his father, with the Jews and the Christians.

Was it difficult for you to make a film about such a divisive character?

I had a struggle with myself, because I didn’t like him in the start… It was a draining movie for me to do. As a Jewish filmmaker and as a person, because I tried to comprehend what was in his mind. I came out of this project very exhausted, both physically and morally, because I’m not a believer in conversion. I tried to be the most fair. I tried to comprehend him as far as I could. I don’t give all the clues because I don’t have all the clues. He was a true believer in religion but didn’t want to give up his old religion, because he didn’t want to cut ties with his families and roots… It wasn’t the character I was drawn to, but the duality of the character.

Did learning about Lustiger influence your own Jewish identity?

We kept on saying: Would you have done it? And I guess no, I would not [have converted]. That remains a part of mystery about his conversion. When I met a member of his family, I told him I would not be judgmental, and that I would keep a part of mystery in the film. How can you be so high up in Catholic hierarchy and still claim everywhere that you are a Jew? And as you watch the movie, I guess you come to terms with this turmoil. For example, I could have implied that he was forced to convert by the church, which didn’t happen. He was very close to the Jews at the same time. It was very strange.

Do we need more figures like him that build bridges between faiths, say, a Jewish imam?

His purpose was to reconcile somehow the Jews with the Christians at this time. He was really incremental in bringing the pope to Jerusalem… He was useful somehow for the Jews… If you ask my opinion as a Jewish man, I think one is enough. Conversion is not something I’m for.